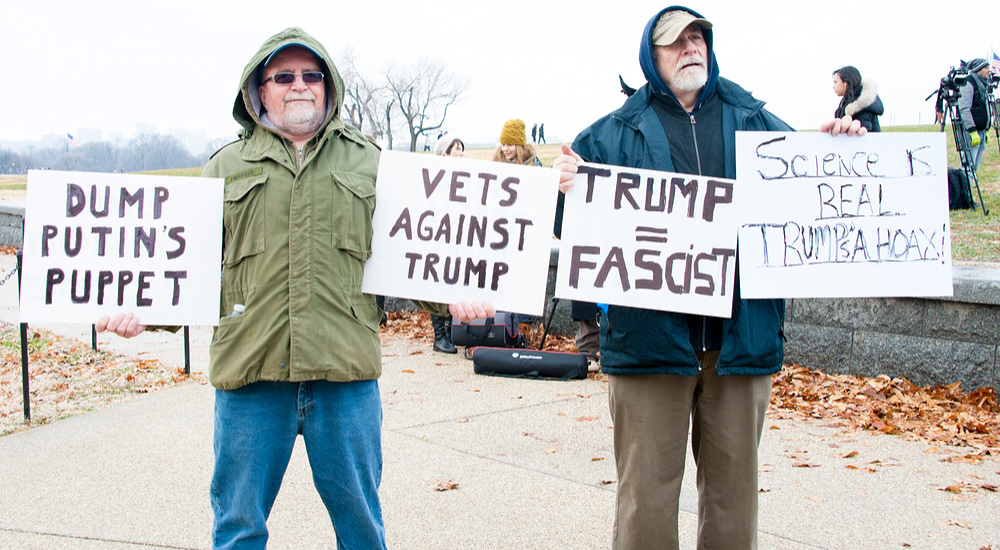 America is on the precipice of total destruction by a group of has-beens, egocentrics, psychotic adventure seekers, and being led by a man that has open the gateway to Hell.

So many RINOS, white supremacists, fascists, communists, uneducated white men and less than informed millennials are partying like it is the year 1999. No, I am sorry, we are not going to all be driving little red Corvettes, nor building Another Brick in the Wall.

Bill O’Reilly, the latest in the quartet of evil spreading hatemongering decided to go on a bloviating diatribe on his Fox News show, and showed not one ounce of being fair, unbiased, or factual. Joining the White Supremacy groups, he echoed that only minorities and liberals want to end the Electoral College so that these groups can control the outcome of elections. Bill, where did you get your facts, oh, sorry no facts, just made assumptions. I am White, do not live in a huge city, go to work every day, not part of a Union, and consider myself a very strong Constitutional Conservative. I completely disagree with your bloviated unsubstantiated claims. The Electoral College did not mirror more than 50% of America. That is a very high number when you look at being wrong.

We then had to muster enough Pepto Bismol to stomach the sickening diatribe of one Newt Gingrich, once again, lying to the tune of the Devil went down to Georgia. Newt informed us that the words “Drain the Swamp” was a cute little saying but would not be used anymore. Really? And your sources for this articulation of one said Donald J. Trump’s mind over matter, where there is no mind so it doesn’t matter? Today, Thursday, Donnie Brook comes out like an Ostrich and states whoever stated we would not be using Drain The Swamp is wrong. Like the whole country did not know that Newt Speaks for Donnie Brook.

So, do we finally get an admission of guilt from Donald and Ivanka, as she takes the role of Spouse in the White House? Are the lap dancing, caressing of Daddy’s face, and stroking whatever else finally culminated to the ultimate White Trash escapade? So let us get this straight. A young teenage girl, with very short shorts, is sitting on Daddy’s lap, caressing his face, and no one thinks that is strange? Then we go to the TV talk shows where Donnie continues to announce that if Ivanka was not his daughter he would be dating her. Then we have pictures of Ivanka giving daddy lap dances when she should be more concerned about her friends sleeping over and having pillow fights, to Donald then wanting her to do a Playboy spread. Now we have the XXX movie star of the lesbian type not going to be in the Whitehouse, but Ivanka will be playing that part. Shall we next have a video of them having children? Any adult father should be disgusted, outraged, and demand better from the next President.

We go from the Nazi salute to the Mussolini fascism, and from the Democratic Republic to a Kratocracy ‎(plural kratocracies) A government established by seizure utilizing force or deceit with rule maintained by strength. Yes on every street corner there is deceit from hiring over 1100 illegal aliens under the H1b and H2b programs, to the spousal rape, to money laundering, to racketeering, to lying about others running against him, Donald has truly been the deceitful little tyrant. We see Donald with so many ties to communism, between his love of Putin and all things Russian to his Donald Trump clothing and trinkets being born from the slave hands in China. One sees that this adventure park is more like the mirrors of terrors….

Now do not let us forget Curly and Mo, the Trump boys, who tried to create a charity that seemed in public view to be a great cause, but the money was then to be funneled to the Mighty Oz as they followed the golden pathway to power and money. Ooops, it backfired, and they were caught trying to funnel that good old green cash to Daddio.

We have Russia involving itself in American elections is wrong no matter how you try to sell it, Donald. You should have tried a new approach, like being appalled about it, and not try to blame others or dimish the seriousness of it. Not too smart at times are you twitter fingers.

And today, the really scary things come screaming at you. Kellyanne Conway will be Donald’s Counselor to the President. Ya like the ugly, big mouthed, lying using whore will be counseling the Egomaniac, psychotic, schizophrenic. Can you imagine how that will go? I am scared to think which direction they will be going at any specific moment. Then Donnie, the twitter fingers, shrunken scalp boy states that America needs to make so many nuclear weapons that the world will finally understand the seriousness of them. Really. May God break your fingers and make them shorter so you can never

reach the nuclear buttons. You are truly a special child are you not.

To you the followers and other pundits that I missed, I am sorry, but the players are racking up like the dominoes in a Japanese domino-off contest. We could discuss the blase’-laissez-faire of billionaire and millionaire cabinet members, or we could discuss Sean Hannity and his blatant head suffocation, but this adventure park can only handle so many terror rides….

May your days be bright, and may the terrors of the Tyrants be little.

AMERICA DESERVES MUCH BETTER THAN THIS CURRENT FIASCO OF FOOLS, FOOLHEARTED AND DISGUSTING FAMILY AFFAIRS…