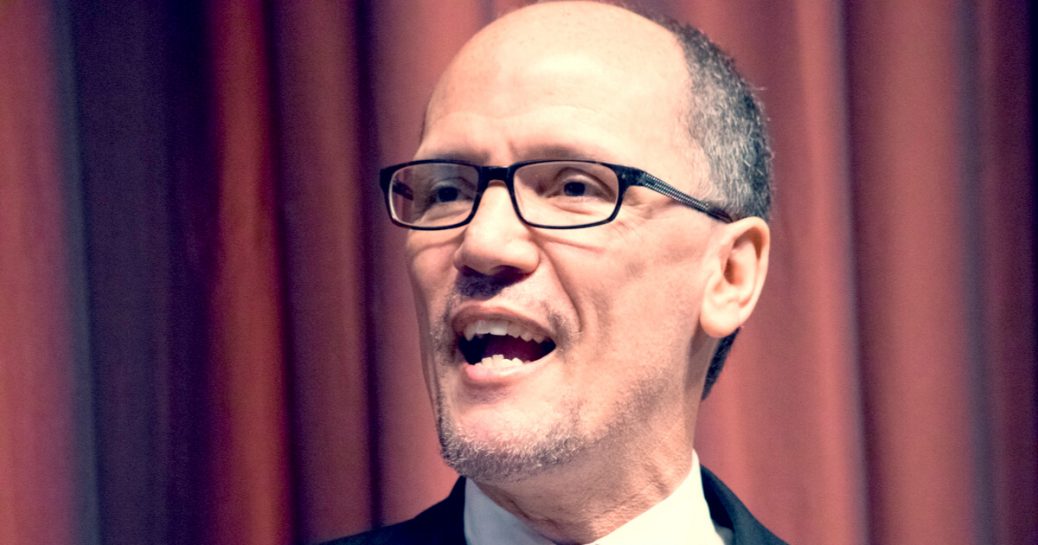 In an action causing many to wonder of the competence, if not the sanity of DNC Chairman Tom Perez Friday, April 20, 2018 the Democratic Party filed a lawsuit on Donald Trump’s Presidential campaign, the Russian government and the Wikileaks group, claiming a conspiracy to help Trump win the 2016 election.  Where one of the three is 10,000 miles out of jurisdiction the suit appears to be nothing more than a stunt or prank, but a fatal one indeed.

The multimillion-dollar action was filed in Manhattan Federal Court claiming “In the Trump campaign, Russia found a willing and active partner in this effort to mount a brazen attack on American Democracy,” with Russian infiltration of the Democratic Party computer network claiming “The Trump campaign gleefully welcomed Russia’s help.”  Why do we feel a liberal judge will dismiss this action in a “New York minute” where a conservative jurist would move it forward with a broad grin?

The Trump Administration responded with, “Today, the Democratic National Committee filed a wide-ranging, partisan civil lawsuit in federal court against the Trump Campaign, WikiLeaks, and the Russian Government.  In response, Donald J. Trump for President, Inc. notes that this frivolous lawsuit is a last-ditch effort to substantiate the baseless Russian collusion allegations by a nearly-bankrupt Democratic Party still trying to counter the will of the people in the 2016 presidential election. This civil lawsuit is completely without merit and will be dismissed in due time.”

Brad Parscale, Campaign Manager of Donald J. Trump for President, Inc. said, “This is a sham lawsuit about a bogus Russian collusion claim filed by a desperate, dysfunctional, and nearly insolvent Democratic Party, with Democrat conspiracy theories against the President’s campaign evaporating as quickly as the failing DNC’s fundraising, they’ve sunk to a new low to raise money, especially among small donors who have abandoned them. There is a great deal the American public wants to know about the corruption of the Democrats, their collusion to influence the 2016 presidential election, and their role in prompting a scam investigation of the Trump Campaign. While this lawsuit is frivolous and will be dismissed, if the case goes forward, the DNC has created an opportunity for us to take aggressive discovery into their claims of ‘damages’ and uncover their acts of corruption for the American people.”

DNC Chairman Tom Perez is an attorney and former prosecutor who knows very well while this filing opens Trump campaign records to “discovery,” allowing them to get at them it does the same for the Clinton side, including:

The DNC contracting and paying for the fake Steele “dossier,” in an illegal action laundering money through a Washington, DC lawfirm paying Fusion GPS $12 million for a 38 page fictional hit piece represented as authentic, but without documentation of any kind!

That the DNC conspired to rig the nomination for Hillary Clinton over Bernie Sanders and how in illegal maneuvers and money transfers not reported to the Federal Election Commission per law and that will produce huge fines bankrupting the party!

Why the FBI was not allowed access to the DNC servers when the DNC complained they had been “hacked” by Russia.  This was an obstruction of justice and linking to the Clinton/State Department email scandal for a serious trip through that minefield.

How DNC officials colluded with news media to influence the outcome of the DNC nomination violating election laws in the process with Donna Brazile getting debate answers illegally! This alone could turn the Leavenworth prisoner roster into a list reading like a Clinton era White House state dinner!

Hillary Clinton’s deleted emails will be released to the public no later than September 28 in accord with a court ruling on the contents of Clinton’s “backup” email device that had been in the custody of then FBI Director James Comey who held it in secret, thereby obstructing justice!

The backup hard drive holds 72,000 pages of documents and where it is in a computer format allowing for quick searches it is very likely to produce a mountain of indict producing evidence.

All of this will break on the ramp to the midterm election with great destruction. The very least effect will be to reduce Democrat voter participation in an election where they need every voter they can muster, and more.  Where all of this obvious we can only conclude the Democratic party is on death watch.