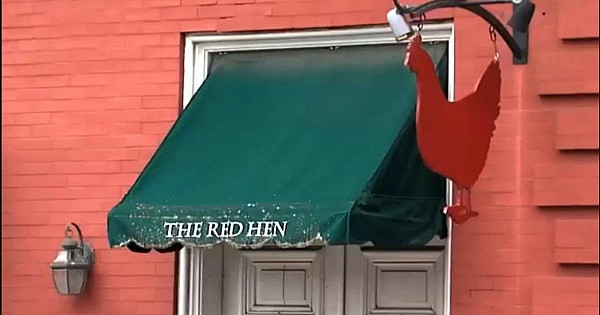 It was Kindergarten, circa 1973, when I had my acting debut. The play, as I recall, was “The Little Red Hen.” My cameo appearance was a stellar role that rocketed me to mediocre stardom (at least in the eyes of my mother): I was the back end of a horse…ah, to be typecast at such a tender age! Years later, another horse’s ass starred in a modern saga of Red Hen. This time, the stage was set in Lexington, VA….

By now, it’s old news that the owner of the Red Hen, Stephanie Wilkinson (cousin of Meryl Streep, according to VA State Congressman, Ben Cline), confronted Sarah Huckabee Sanders and asked her to leave the restaurant. According to Wilkinson, she told Sanders, “The restaurant has certain standards that I feel it needs to uphold, such as honesty, compassion, and cooperation.” While I applaud Ms. Wilkinson for being a champion of the concept of “honesty,” she’d be intellectually dishonest if she were to claim that her actions demonstrated a spirit of “cooperation” with Sanders or a shred of “compassion” for the spectacle that Wilkinson’s actions caused Sanders’ dinner party. In true Derangement Syndrome fashion, blinders were on and gloves were off. The actions were justified through the “resistance” of all that is associated with the current administration. True to form of those leading the resistance charge, those virtues demanded of others by Wilkinson weren’t afforded to others by her.

Folks on the left were quick to point to the recent Supreme Court Decision in favor of the conservative baker who declined to make a custom wedding cake for a same-sex wedding couple; citing his religious beliefs as a precluding factor. Surely Wilkinson’s actions were consistent with the actions of the baker; correct? Let’s start with that case….no; actually, let’s go back to another dark time and explore what happened to Rosa Parks.

Rosa Parks was using public transportation in 1955 when she refused to go to the back of the bus. She took a strong stance against the prevailing segregation laws in Alabama at that juncture; and good for her. Mind you, Rosa was not refused service outright; rather, she could have used the resource that was available to the public so long as she sat in a designated, segregated area. We all realize just how wrong that policy was. Fast forward to 2018: no concessions were made for Sanders. In essence, Sanders was not told to go the back of the bus, rather, she was told to get off the bus altogether. There was not even (the cruel and unconscionable) separate but equal criteria applied; rather, it was a matter of disliked / unwelcome. We’ve come a long way, right? We simply hate in different ways and have created new categories of sub-humans; as was evident when MSNBC’s Deutsch likened those who voted for Trump to Nazis at the border. According to folks like Maxine Waters and Stephanie Wilkinson, if you are part of the administration, you are fair game to be harassed. We’ve seen conservatives shot while playing softball, kicked out of restaurants, singled out while watching Hamilton. We’ve heard celebrity calls for the kidnapping of Barron Trump (Peter Fonda) and even calls this week to harass the President’s son at his school….nice going Tom Arnold. It’s a venomous hate that’s all-consuming. Celebrities -and many of their fans- have lost their cool and Deutsch is saying that the folks who are worse than the current administration are those who voted for the President! A Civil War may not have started; but, a war of civil discourse has; and anybody who is not in the resistance must be part of the problem. They are all fair game according the developing rules of engagement (or in the Sanders case, disengagement / disenfranchisement).

Now, before folks get all up in arms and claim that the baker did exactly what Wilkinson did, let’s double back and look at the case of the Colorado baker. The baker refused to make a custom cake on grounds of his religious beliefs. He did not refuse to sell the gay couple any other goods in his shop that would likewise be readily available to the general public. He did not kick the couple out of the store or ask them not to shop there simply because they were gay. No; any cake, combination of already baked goods, etc. could have been purchased by the gay couple without incident. In short, anything available to the public was also available to them. Likewise, such goods were also available to anybody of any race, creed, sexual preference, gender identification, nationality, etc. The caveat was that the baker, as a vendor that makes general goods AND custom goods, refused to accept to take on a request to perform the custom job. Lots of bakers decline custom work: they won’t make cakes to celebrate divorce or the death of somebody. They won’t put vulgarity on a cake. They won’t make erotic cakes that resemble male or female genitalia or female breasts. They won’t make cakes of a satanic theme, etc.  In line with that train of thought, try to get a Yankee’s cake made in Boston…just try.  The same holds true of vendors who typically take on custom work of any sort; they often accept or deny jobs without having to cite a reason for turning the job down. Even folks in the porn industry turn down jobs by saying, “Sorry, I won’t do that.” In this instance, the baker turned down a custom order and stated a specific reason for not accepting the custom job: it’s against my personal religious beliefs. Is that hateful of the baker (or is it “honest”)? Would it have been hateful of the gay couple for force the baker to take on custom work that violated his religious beliefs (or would forcing the action show a lack “compassion”)?

In the instance of the Red Hen, Sanders and her guests were there to dine off of the menu that was available to any member of the general public who could have otherwise walked in off the street. Sanders’ request was not for a custom catered meal; rather, it was for a regular Joe Schmo meal that was, and is, available to anybody. It’s analogous to the already manufactured cakes that the baker would hold out for sale to anybody. That being said, Wilkinson acted with less “cooperation” than the bus driver did in the Rosa Parks case; as and she completely refused all service on “moral grounds” because she disagrees with the separation policy (that has been in place since Janet Reno) and the transgender policy decisions regarding the military. Apparently, asking Sanders to leave was not enough as the Sanders crew continued to be taunted by folks from the Red Hen from outside the restaurant they chose as a Plan B option; located just across the street. The owner of the Red Hen allegedly launched a protest in front of the neighboring restaurant. Once again, Wilkinson acted with less “compassion” than did the Colorado baker who would have sold the gay couple anything that he would have served the general public…yet, Wilkinson claims that her decision was based on upholding honesty, compassion, and cooperation?  If Sanders violated no stated or posted restaurant policy (i.e.: no shoes, no shirt, no service…..no guide dogs allowed, etc.), I find it hard for an establishment that provides a generic menu to the general public to disallow the provision of services generally available to all others as non-custom services.

Hens start off laying eggs. In the end, once they cease being productive, they eventually end up on the menu. My conjecture is that the Red Hen may be viewed as a glorious creature by some folks on the left right about now; however, it may have just laid one of its last eggs. Barn yard stories never have a happy ending and today’s hen is tomorrow’s chicken soup special.