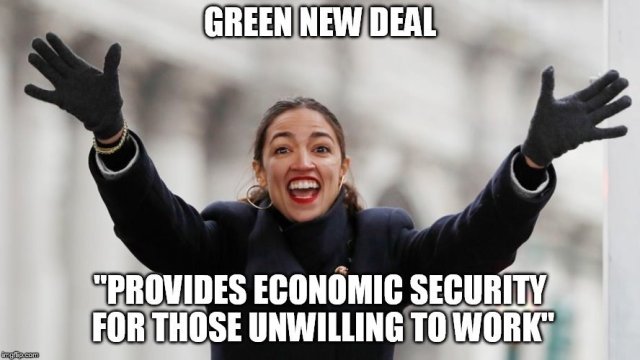 Socialist Alexandria Ocasio-Cortez has become so well known after just a month in Congress that she is known by her initials: AOC. Usually, presidents like FDR and LBJ (also Socialists, though they didn’t admit to it) get such treatment.

I don’t think Nancy Pelosi, the Speaker of the House, and (until AOC took the spotlight) the head of the Democrat Party cares too much for AOC. This is because Democrats are treating the inexperienced Bartender from the Bronx as if she was the new head of the party. Within hours of Cortez announcing her “Green New Deal,” all the announced Democrat presidential candidates were falling all over themselves trying to be the first to endorse it – although no one (including Cortez) seems to know just what it is or how it will be paid for.

Perhaps we can take some clues from history as we try to understand what this political novice is proposing – which the Democrats seem to have adopted as their game plan for 2020. Obviously, her not-very-original title came from FDR’s “New Deal.” What was that all about?

First, was the New Deal a good deal? The socialists and globalists thought it was. Conservatives who believed in constitutionally limited government thought it was a very bad deal. One thing is clear. According to History.com, “Roosevelt’s New Deal fundamentally and permanently changed the federal government’s relationship to U.S. citizens.”

The New Deal did put millions of Americans to work at a time when 25% of them were unemployed. But FDR could have accomplished the same goal without starting the U.S. on the path to Socialism. Without the foundation of government takeovers instituted by Roosevelt, AOC’s Green New Deal would have been met with derision. But the underpinning of FDR’s rather elementary Socialism has made it possible for Socialists and Democrats to support Cortez’ fantastical ideas with a straight face.

The two biggest problems with the New Deal were:

First, it was very racist. Without the support of Democrats, FDR could never have gotten the New Deal off the ground. At the insistence of the Democrats, blacks were discriminated against. Either they were left out of the jobs programs completely, or they were paid far less than whites.

Second, from the point of view of constitutionalists,  the New Deal completely destroyed the concept of a free society and paved the way for the big government we are cursed with today. This was when government control of the economy really began. There were Socialists in our government before FDR, but none had had the excuse of a Great Depression to use as the premise for a government takeover.

FDR promised that the New Deal would end the Depression. It never did, but he was such a smooth talker that he was elected four times. He also introduced the idea of unlimited printing of money backed by nothing after he took the nation off the Gold Standard. This led to our current huge National Debt that is forcing our country closer and closer to bankruptcy.

FDR and his New Deal deserve a huge amount of praise – from the Socialist nations and the globalists of the world.

Before we get into the specifics of the Green New Steal (as I like to call it), we should look at how it came to be. A brash twenty-something bartender with zero political knowledge or experience managed to fool the not very sophisticated Democrat voters of the Bronx into voting for her. She was helped by the fact that her Democrat opponent had held the seat for so long that he didn’t think he needed to fight her for it.

When she announced her win (in a bar, of course), she stated that she couldn’t wait to be inaugurated (presidents are inaugurated, not representatives) and start signing bills (again, only presidents sign bills). Since then she hasn’t bothered to educate herself. She has referred to the “three chambers of government” among many other mistakes that anyone in her position should be prepared for. Her worst was when she spoke of the “Israeli occupation of Palestine.” When the interviewer pointed out her mistake, she airily replied, “I’m not the expert on geopolitics.” Obviously. So why are you commenting on things you know nothing about?

Surprisingly, Nancy Pelosi is afraid of her, so much so that she publicly ridicules her. When asked a question about Cortez’ initiative, Pelosi said, “I don’t know much about her Green Dream, or whatever she calls it.” She also ridiculed Cortez’ repeated calls to abolish ICE. Even though she might be sympathetic to the idea, she’s a smart enough politician to know that would never pass.

Cortez has been in Congress for 5 minutes (actually a month) but she’s already acting like she runs the place. She has become very popular with young mush-heads who don’t understand any more about politics than she does. So the Democrat presidential candidates are deferring to her, and most Democrats are rushing to join her on the left. Her first week on the job, she led a sit-in in Speaker Pelosi’s office during which she demanded that a new committee on “Climate Change” be created. Predictably, Pelosi slapped her down – smiling all the while.

So she turned her efforts to the “Green New Deal”. No one – apparently including her – knows what’s in it, because she keeps changing it every day. But here is what she and several of her looney Left sycophants have announced:

Other provisions that were posted on her website, and then removed after an uproar from Republicans and Democrats alike, required that the government (you and me, the taxpayers) would provide every American (at no cost to them): 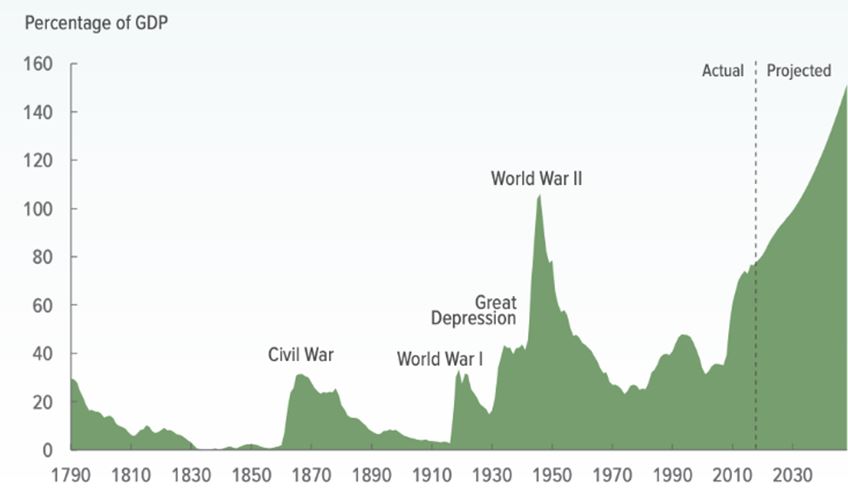 There’s more, but you get the idea. When asked how she would pay for all this, she glibly replied, “Well, we paid for the New Deal, the Moon Landing, and the Interstate Highway System.” (These are all stock replies that Leftists use when asked how to pay for their wild ideas.) Take a look at this chart. The tens of Trillions her deal would cost would be more than all of the above, plus the horrendous costs of World War II. It would more than double the National Debt. We can barely afford to pay the interest on the Debt now and haven’t paid a penny on the debt itself in over three decades. This would push us into actually declaring bankruptcy (in the form of a default on our National Debt).

She has also told reporters variously that we could increase taxes on the rich to 70% or even 90%, “sharing” the costs (which means stealing even more money from businesses and individuals) and printing more money. (We have already printed more money than we could get by selling everything in the nation – homes, business, public buildings, parks, highways and bridges, and your hound dog.) Since all our money is debt that our nation owes, in reality, we are already in bankruptcy. And this clueless young woman wants to double our debt.

Let not your heart be troubled. Only the most Socialist-leaning Democrats would vote for this. But be warned. This is the direction the Democrat Party is being pulled toward by their radical and vocal base. If any of the following were to occur, Cortez’ dream (I think it’s more of a nightmare) could become a reality:

One thing frankly confuses me. Ask any avowed Socialist in America to show you any place on earth where Socialism has worked. They cannot. So why are they working so hard to transform our country into an abysmal failure? The only thing I can think of is that they want power – even if it means they command a sinking ship. After all, when both Socialist and Communist regimes go under, it only hurts regular people. The elites who caused the failure usually come out on top, with millions or billions stashed in some other country.

The Lord is coming back soon. But I’m not going to join those who say, “It doesn’t matter. It will all be over soon.” I’m going to pray and fight to keep our nation great. I refuse to live in a Socialist country. 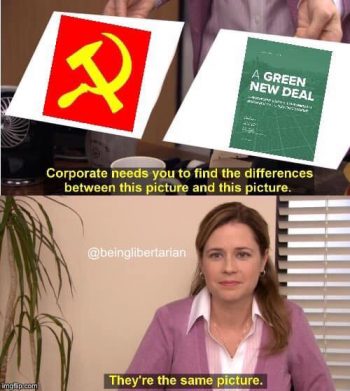