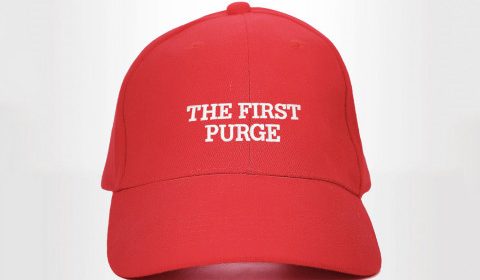 This latest delusional future manufactured by leftists encompasses everything that is wrong with liberal mentality.  Liberals are so ignorant they think movies like this, and “The Day After Tomorrow,” and “Ready Player One,” are documentaries rather than the fiction of deranged minds.  The people who promote abolishing police and endorsing the government tyranny of socialism imply Trump is leading America to its destruction through subliminal indoctrination.  Liberals are blinded by the light and turn toward the shadows to escape.

Lunacy like this is always founded in leftism and their obsession with committing genocides.  “The First Purge” is their belief that Trump is Hitler x10 who will cull the population by unleashing all evil people to do as they will for twelve hours each year.  As the police withdraw and the good people hide, all the evil ones wreak havoc committing riots, robberies, rapes, and murders without consequence.  They advertise this psychotic movie with a Trump MAGA hat.  Even doing the most basic, elementary, infantile examination of American culture the past four years proves that it is leftist liberal Democrats who want to do away with police, who riot, who falsely accuse the other half of the people as being racists, and who want to cull the population.

Liberals believe myths that are obvious fictions, such as man-made climate change, Trump-Russian collusion, and the Population Bomb, as if they were proven factual reality.  How many movies have they made depicting mankind as the virus infecting Mother Earth killing her with a fever?  How many depict evil people wanting to wipe out half of humanity to supposedly make life better for the other half?  Despite the good people in those movies fighting that evil, leftists continue to believe that such genocides would be good for humanity.  They project the desires in their own hearts on the righteous.  They deny this when they campaign for your support, but then they also deny they want to raise you taxes and take all your money for themselves.  They always say they’ll take money from the rich and give it to the poor.  Thanks, Prince John, for pretending to be Robin Hood.

This is what leftists do when their indoctrination begins to fail, when their lies become exposed.  When their smears accusing all Republicans of being racist sex offenders falls apart, they create fairy tales that they promote as truth.  They produce fictions they present as reality making their predictions of the future as if they know what’s going to happen.  The problem with this is their futures always come from their own dysfunctional minds projecting what they would do onto the righteous.  Trump becomes Hitler in their minds because they want to warp the thinking of those who wonder if all the great things they are seeing him accomplish are actually real.  Propaganda has a strong influence on the weak-minded who are ignorant, gullible, and oblivious to the truth.  One must wonder how many times can you fool a liberal?  Democrats have been promising to make life better for inner city blacks for six decades and things are worse than ever.  If you point out that Democrat control of those cities is the cause they deny it is happening.

How can it be more obvious than in the Left promoting racism by smearing righteous white people as racists and making it right to attack them?  This is how the Left has always functioned – by demonizing the righteous.  They dupe fools into following them believing they are doing what is good and right.  There is a fine line between leadership and rulership, between righteousness and wickedness, between liberty and tyranny.  Liberals lack the moral sense to see the divides.  Teaching them that good and bad are not the same as right and wrong is a lesson that requires a moral education.

That is how fascism is taking hold in the heart of America in the shadow of Hitler’s Germany, Stalin’s Russia, and Muhammad’s Islam.  They said, after American defeated fascism, Nazism, and imperialism in WWII, then beat back communism during the Cold War, and now while waging war against the renewed Jihad of Islamism, that it couldn’t happen here.  But leftists have risen up once again to promote the parent ideology of all these leftist tyrannies, socialism, and once again pull the wool over the eyes of Millennials to believe they can make socialism a good thing.  What does it take to open people’s eyes?  How do you open the minds of liberals and turn them away from the delusions implanted in their brains?  You can’t teach morality to people who believe they are pure of heart.  You cannot overcome hypocrisy in people whose mentality is naturally two-faced.

The future of Democrats lies in their own hands.  If they follow Republicans, they will find a future that is the American Dream.  But if they adhere blindly to Democrats they will suddenly discover themselves to be living as they are in their dystopia.  Without exercising critical thinking of listening to what both sides actually say rather than letting others tell them what was meant, without paying attention to what Republicans and Democrats actually do rather than living their lives oblivious of events, without deciding for themselves what to think rather than letting others tell them what to think, they are just lemmings who believe they are following good people.  Without knowing what is right from wrong they think only in terms of what is good or bad for themselves.  Then they will wake one day to find they’ve been led down the road to Hell that was paved with their own good intentions. #Walkaway

Democrats are not Capable of Civil Discourse Because They Must Lie

Democratic Socialism Taxing Away Your Wealth