The Bike in the Tree 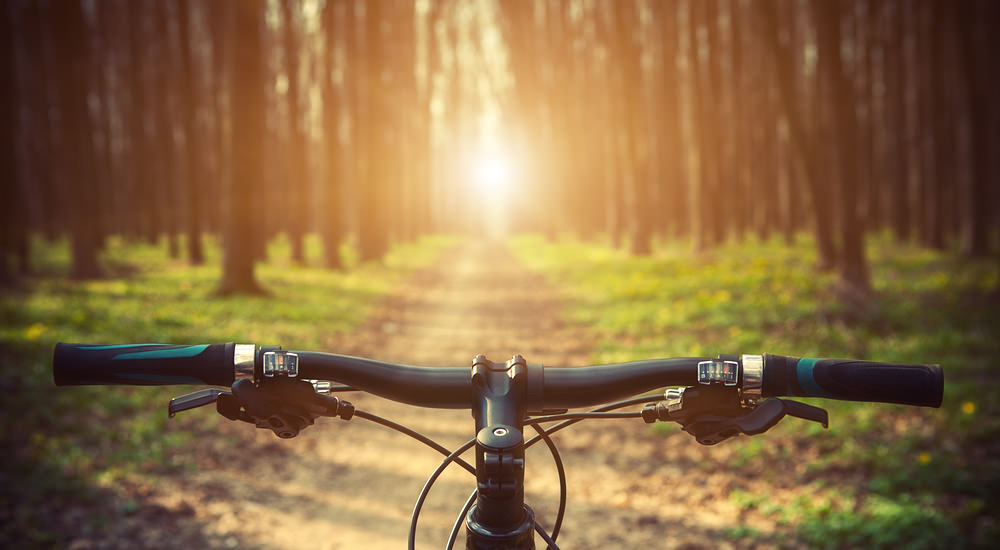 Have you had enough yet, reached a saturation point and are in dire need of a break, a short respite, a little R&R? Is your psyche in overload, inundated with politics, November, Trump, Clinton, Obama, the media, republicans, democrats, the economy, jobs, conservatives, liberals, LGBT, ISIS or ISIL, the Middle East, restrooms? Perhaps I can help, a brief interlude, something easy on the mind, maybe even a bit of romance.

There’s a bridge that connects two counties and covers a distance that spans a playground, major highway, a river and railroad tracks. It was on this bridge that accommodates both pedestrian and vehicular traffic that I discovered what turned out to be something unusual and fascinating.

It all began about 40 years ago. I first noticed it on my way home from school. While crossing the bridge, nestled in a large elm tree that rose up about 50 feet from the wooded area below was a small bicycle. It must have been there a long time, for it was all rusted over and had the appearance of an antique. I could not reach it of course, for it was about 10 feet beyond the security fence, and enveloped in the branches of the tree.

I stood and stared at the mini conveyance for awhile and wondered who put it there, and why would anyone discard a bike and decide its final resting place would be in a tree; I had already determined it could not have grown there in place. Then I thought perhaps long ago when it was just a small sapling a few feet tall, some insensitive and forgetful kid left the little guy, resting there against the still growing tree. Or maybe it was being transported cross country in an airplane, when the cargo door accidently opened; it fell out and landed in the tree or the most likely explanation, somebody just flung it from the bridge. Yes, these were just some of the musings that a young imaginative mind could dream up.

From then on whenever I crossed the overpass, even if I was on the opposite side, I would run for my life with a knapsack full of books, from the speeding cars to the other side just to pay homage to the bike in the tree. Chances are most passersby had not even noticed it just feet beyond the security fence.

Although an inanimate object, it didn’t even know my name and couldn’t communicate, the bike in the tree became a symbol, something to emulate, an example and focal point in life. There it rested all alone, no loved ones or friends, save for me and perhaps the tree, and no one to revel in the pleasure one might have had in its usage. In the snow, rain, the hot summer sun and when autumn leaves fell, there it was covered in white or green, or draped in a layer of multicolored foliage; it always seemed in place and held a certain fascination.

Strong, unyielding, persevering through years of neglect and inclement weather, and refusing to give in to the temptation to give up, just let go and fall; a testament to courage and fortitude. But then perhaps the tree after all this time would refuse to give up its charge, and would hold it fast like a protective mother.

One day while on my way home I noticed a group of kids I recognized from school gathered around the bike in the tree. They were talking and pointing at my friend. As I approached one of these punks was climbing the security fence with his accomplices holding him steady. I yelled out stop and ran at the group, and asked what they thought they were doing. The climber came down and said he was going to remove the bike from the tree. I said no you’re not; move away or there’s going to be trouble.

What had happened, I had mentioned to friends at school of the bike in the tree and word had spread around, and now all the deadbeats and malcontents knew of the bike and no telling what would happen. I pushed the climber into his friends, we hassled and the others joined in the fray and we all fell to ground, no punches were thrown, one of the punks got me in a headlock. Several cars stopped and broke up the altercation. But I issued them a fair warning to stay away or suffer the consequences.

We went our separate ways, but I was troubled and wondered what I might do. I could not be there keeping guard all day long. I became crestfallen and even considered making the effort to remove the bike myself, hold it at home for a brief period of time, and then when all the interest died down and others believed it was longer there, I’d put it back in place. Without going to this extreme, I decided to let things remain and just keep a close watch on the bike in the tree. Actually it would have been dangerous for anyone to try and remove it, the bike was out of reach from the walkway, the trees branches held it fast, it would have required climbing over the fence and stretching with very long arms to try to grasp it, or going down below and climbing up the tree. I decided to not make any attempt.

Then what had to be the most disturbing and troublesome situation that occurred with the bike in the tree, was that fateful day when while crossing I noticed two men, with Parks Department uniforms, standing at the fence and looking at the bike in the tree. I approached and asked politely, what’s going on. One of the workers said they were going to remove the bike. I stared intently at these bikenappers and shouted, OH NO YOUR NOT. The one looked at me and asked, “And why not”. I did my best to explain what the bike meant and how it deserved some respect, and that I knew if they removed it, it would be destroyed. Then I added please, leave it alone, anyway the tree will never give it up. They looked at each and smiled, and said “we’ll consider your request”. Apparently they did, the bike survived.

The senior prom was fast approaching and I had no date yet. Finally having gotten up the nerve, I approached her, Teresa, the most beautiful girl in school. I stopped her in the hallway between classes one day and asked her to meet me after school, I wanted to discuss something. At first she was somewhat aloof and seemed uninterested, and asked what this was all about. I said it was important, and that the fate of the world hung in the balance. She laughed and said okay.

We met after school, it was a bright sunny spring day and the sky was almost as blue as her eyes. Even in her school uniform, she was breathtaking. We walked together under the watchful gaze of other students who were whispering, nodding and smiling. I asked what her plans were after graduation; she said she was going on to college to study the law. I steered our path toward the overpass, she seemed rather impatient, hesitant, and asked where we are going. I said nowhere in particular, just walking and breathing in the fresh air, in tune with nature. She spoke defiantly and said, “I’m not going to the other side of the bridge”, I asked why not, she said, “It’s filthy over there and filled with savages”. I said, I live over there, she smiled.

We finally arrived at the spot, and I stopped and began talking about the approaching summer and that I was also considering college or when of age the military, but first would look for a job. She nodded unconcernedly and seemed impatient. What was most outrageous was she didn’t notice the bike in the tree, and paid it no attention. I even stood between her and the bike which was directly behind me, and in front of her, nothing.

We stood silent for a minute, and finally I worked up the nerve to pop the question. “Will you go to the prom with me”? Her beautiful eyes filled with venom, she seemed outraged and with extreme prejudice rebuffed me and said “NO”. She stood there with arms akimbo and bent forward, got real close and looked into my eyes with her big baby blues that seemed to have turned yellow like a serpents, and pointed a finger like a loaded gun in my face, and then poked my chest with the same digit and said, “I waited weeks for you to ask me to the prom, and now with only a week left, you ask me.

She was now glaring at me, it was unnerving.  Well, she said, “I was asked by several other boys and decided to choose one of them, besides he gave me a bracelet and has asked me out to the movies”. I asked who he is. She ignored me, and then added, “Serves you right, he who hesitates is lost”. She then turned and sashayed off down the bridge, stopped, turned again and with her hands dug into her sides, gave me a big smile and disappeared around the turn.

I was crushed; the world I knew was collapsing around me. The whole school will soon know. I’d be ostracized, a pariah, an outcast, a poor lonely guy. Perhaps I’ll run away and join the French Foreign Legion, what would my family say; embarrassed, would they disown me. I’d arrive home one night and find the house empty with a note tape to the wall, sorry son, we can’t have losers. Then I thought for a moment and asked myself why I would want to associate with a female gold-digger and bigot who had no sense of intrigue, no imagination, unobservant, clueless, couldn’t see the forest from the tree with a bike in it.

Someone once said “Even the smallest and what may seem most insignificant of things can have a lasting and profound effect on one’s life and memories, but then it all depends on the depth of one’s imagination”. Today it’s still there, the seat is almost gone, the rubber tires are frayed and hang loosely around the rims, but it’s still the same bike in the tree. I often wonder if some other kid has found what I believe to be an iconic relic of times past, and can appreciate its significance. After all this I sometimes think, if ever I cross the overpass and find it gone, will life ever be the same.