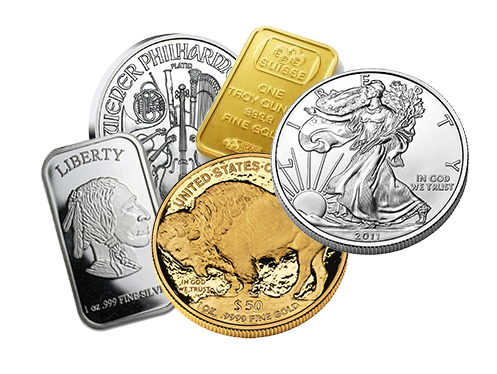 It seems like everywhere you go people are talking about Gold and Silver. Why would people care so much about what some people call a “barbaric relic”?

Gold and Silver are the only money used in the Bible – a six thousand year history. Worldwide, Gold and/or silver have been the foundation of every successful economy. Nations that adopted “fiat” currency – paper money backed by nothing, but enforced by the government – have failed. In fact, the lifespan of fiat currencies internationally has been an average of a mere 37 years. Closer to home, the Founding Fathers set Gold and Silver as the only Constitutional money. It took what many consider to be unconstitutional government action to change those provisions of the Constitution.

The Gold Index is often referred to as the “Fear Index.” When “wars and rumors of wars” arise, people dump their paper money in favor of Gold. It has been a safe store of value for thousands of years. Gold is one of the rarest elements on earth, and the only one to be universally accepted as money. Silver, although not nearly as rare as Gold, also falls into this category. You might say that Gold is the King, while Silver is the Prince. In addition to their monetary value, both have decorative value (jewelry, vases) and strong industrial uses. And, as the TV commercials say, unlike any other asset class, “Gold has never gone to zero.”

Gold, and to a lesser degree, Silver, have done an admirable job throughout history of protecting personal assets against the cancer of inflation. Most countries have experienced Hyper-Inflation at some time. All nations have experienced some degree of inflation. An interesting fact is that an ounce of Gold or Silver has bought roughly the same amount of food, clothing, labor, materials, and shelter for over three thousand years. This is because governments always bend to the temptation of issuing more and more money to buy more votes and influence.

A perfect example is France. In 1789 the Assembly issued a fiat paper currency called the Assignat, which was backed by nothing (just like the US Federal Reserve Note). They promised that only 400 Million Francs worth would ever be printed. Actually, the notes were supposed backed by property stolen from the Catholic Church, but their value started to drop immediately. The government continued to issue more and more Assignats, in violation of the law. By 1796 it had issued 45.5 Billion Francs worth – 10,000% more than the law allowed. Of course, this inflation of the money supply caused its value to drop even more.

There was rioting in the streets of Paris as the paper money became so worthless that merchants refused it, requiring Gold or Silver coins. The government passed a Legal Tender law, requiring merchants to accept the worthless money, with the penalty for refusal being death. Even that draconian measure didn’t work, so government officials broke the printing plates in the public square and announced a wonderful new currency called the Mandat. Predictably, the Mandat failed – this time in only two years. Napoleon insisted on a return to real money – Gold and Silver coins – and the economy eventually returned to sanity.

Deciding What to Buy

Your first decision is not between Gold and Silver, as many think. Both are Precious Metals, and both have their place in you Precious Metals portfolio. And don’t think that one is better than the other because it is “cheaper”. Silver and Gold both cost the same. $1,000 worth of Silver costs the same as $1,000 worth of Gold.

Think of it this way: Which is cheaper – a $100 bill or 100 $1 bills? The cost is the same. Of course, Silver is cheaper by the ounce, but that should not be the deciding factor. Your Precious Metals strategy is the most important consideration when deciding whether to buy Gold, Silver, or both. Gold is far more rare, so it naturally costs more per ounce. But a wise strategy includes both Precious Metals.

The following are the types of Precious Metals to consider, in the order of their desirability as an investment, as well as their ability to protect your family in case of a financial disaster.

The least desirable are novelty coins, as well as any coins or bars minted privately. Sophisticated buyers only want government-issued metals, so your chances of selling these kinds of coins at a decent price in the future are very small. These are considered Bullion coins.

Next are government-minted coins that have been circulated. Since they have been used as money, they will exhibit wear and scratches. The best example of these in Silver are U.S. dimes, quarters, half-dollars and silver dollars minted prior to 1965 when there were 90% silver and 10% copper. After that, our government started counterfeiting its own coins. Our “silver” coins since then have been made of copper, with a thin plating that made them appear to be silver.

Up to this point, we have only discussed “bullion” Precious Metals. Bullion includes Gold and Silver, whether in bar or coin form, whose only value is the metal. Some may be slightly rare, but for the most part, sell for only a small premium over the “spot” (published) price of Gold.

The important principle is that bullion is best as “insurance” or protection against inflation. Since the U.S. was taken off the Gold Standard by the government, the US Dollar has lost 96% of its value. During that time, Gold and Silver prices have risen in concert with the decline of the Dollar. That doesn’t mean that Precious Metals have risen in real value. It simply means that as the Dollar has lost value, it takes more Dollars to buy the same amount of Precious Metals. This can be easily demonstrated by the fact that one ounce of Gold has bought a fine suit of men’s clothes for over 3,000 years. (Forbes Magazine, 1998.)

An investment is something that rises in value, not just in price. This occurs when a Gold or Silver coin has two types of worth – that of its metal (bullion) and that of its rarity and condition. This type of investment is termed Investment Grade Gold (IGG) and is only available in coins minted by a sovereign government.

From this point on, we will discuss Investment Grade Gold and Investment Grade Silver coins. The first type is similar to the government-issued circulated coins mentioned above, with the exception that they have not been circulated, or if they have there is no visible wear or damage. These “Uncirculated” coins are the same as the ones above. Their condition makes them somewhat more valuable. Investors and collectors alike prize them for their pristine state. These will typically be graded as MS (Mint State) or Proof by one of the two major grading and certification companies – PCGS or NGC.

A more desirable type of coin is one that is not only in great condition but is also very rare. An Uncirculated coin that is very rare may have many times the value of one that is slightly rare. For instance, a US Silver Dollar recently sold for millions of dollars – even though its silver value was less than $16. This is in line with other types of collectibles – such as rare paintings and antique furniture – that often sell for millions of dollars. Fortunately for us regular people, there are many very desirable Investment Grade coins that start at a few thousand dollars.

In summary, the main decisions are not between Gold and Silver – they are between different categories and types of Precious Metals, all of which include both Gold and Silver.

If you’d like to explore the benefits of protecting your assets using the world’s oldest Money – Gold and Silver, request the “Gold Education Starter Package” at www.InvestmentGrade.Gold It contains educational articles and videos on this fascinating subject.

Disclaimer One: This is not intended as investment advice, nor should it be taken as such. The author does not know your particular financial condition, and therefore cannot advise you on financial decisions.

Disclaimer Two: The information above is accurate in the great majority of situations. But there are exceptions to every rule. For instance, there are extremely unusual situations in which a coin that was produced as Bullion, but becomes rare by virtue of the fact most of the coins produced at the same time were lost, damaged, melted down, or a combination of these.