Thank Heavens for the Bill of Rights 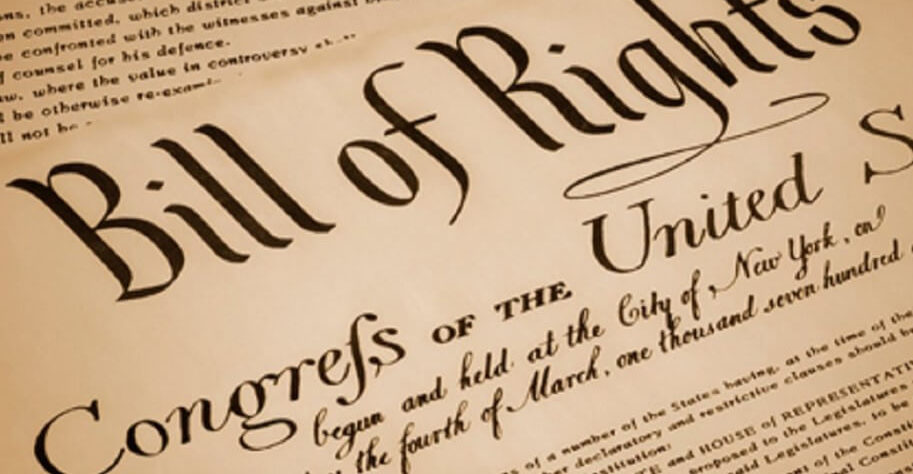 The Republicans in the Senate do occasionally find their backbones and were able to display them as they rejected four pieces of anti-gun legislation. Thank you Republicans and thank you founders for giving us the Bill of Rights.

Given the current state of the federal leviathan, imagine the condition of our individual and states’ rights without the specific declaration of those protections against federal intrusion. Turns out the anti-federalists were right to insist on a Bill of Rights!

We would have no right to own or carry a weapon of any kind without the language expressed in the Second Amendment. We on the right would have nothing specific to argue against the gun-grabbers of the left. For decades we have debated the language and meaning of the Second Amendment, but without it, our argument would be relegated to the abstract, for nowhere else does the Constitution specifically address this right. Given the nature of today’s courts – that would not be nearly enough. Thanks to George Mason and the anti-federalists, we at least have the Amendment specifying this natural right.

Our freedom of speech, assembly, religion, etc. would all be substantially abridged, if not for the First Amendment. We would have virtually no states’ rights left without the Tenth – and so on.

But at the time of our nations founding, federalists argued that there was simply no need to compile a list of natural rights already bestowed upon them by God. After all, these were rights free men were supposed to already have, so what would be the point in listing them. And what if they forgot one or more? This might be more detrimental than having no Bill of Rights at all. Also, they surmised – most states already had a Bill of Rights. This, the federalists thought, was more than sufficient. They were wrong.

As long as men continued to be of good character, there was no fear of the federal government infringing on the states or the

individual. It was understood that any power not specified in the Constitution was to revert back to the States and the people. It was so obvious to the federalists; it shouldn’t have been needed to be spelled out.

Ostensibly lead by the great George Mason of Virginia, the anti-federalists were dead set against ratification of the Constitution without a specific Bill of Rights protecting the states and citizens from federal encroachment. So adamant was Mason that he refused to sign the document, despite a promise made by James Madison to add a bill of rights in the first congress. He was one of only three not to sign. Another was Elbridge Gerry, who was generally cranking and against most everything. The third might be considered America’s first moderate – Edmond Randolph – who was spineless and afraid to be associated with something which might fail.

A promise is a promise – at least it was back then – and after Madison was elected to first the Congress, they took up the various state (anti-federalist) concerns. The first draft, as it were, of this Bill of Rights, contained 17 articles. Most made it through to the second draft and were then modified and combined to form the final draft of 10 amendments, or the Bill of Rights.

One they should have kept from the first draft (it was dumped in the second draft) was Article 16, which stated:

This would sure come in handy – as today’s federal judges write laws, Congress and the Senate willingly relinquish their authority to the President and Obama acts as if he is the embodiment of all three branches.

Lest anyone, or everyone, on the left mistakenly think that the Bill of Rights are indeed rights bestowed upon us by the national or federal government – think again. As I have said countless times before – it one wishes to know what the founders meant – read their own words. They were pretty clear-thinking and concise authors.

Of the Bill of Rights, Alexander Hamilton wrote:

“The sacred rights of mankind are not to be rummaged for, among old parchments, or musty records. They are written, as with a sun beam in the whole volume of human nature, by the hand of the divinity itself; and can never be erased or obscured by mortal power.”

Sums it up rather nicely – doesn’t it.