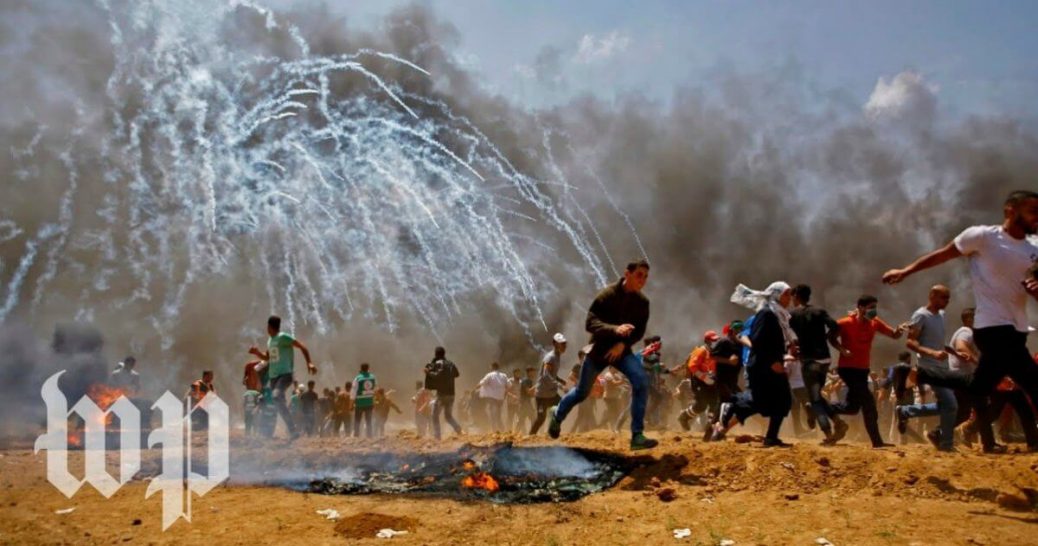 Yesterday, The New York posted published an article chronicling the clash between Palestinians and Israeli troops on the Gaza border.

They write that, “At least 52 Palestinians were killed in clashes with Israeli troops Monday, casting a pall on the inauguration of the new US Embassy in Jerusalem – and marking the deadliest violence since the 2014 Gaza cross-border war,” officials said.

Obviously, these “clashes” were the result of the Trump administration’s decision to move the American embassy from Tel Aviv to Jerusalem.

Well, that’s not really accurate, now is it. The U.S. embassy in Israel is the only American embassy not located in a nations’ capital city. Trump is merely setting things right. Yet we’re not supposed to question the oddity of this.

Instead we are obligated to accept the Anti-Semitic conventional wisdom that because Jerusalem is somehow “disputed” territory, it is not recognized as Israel’s capital. And who disputes it? The loser’s of the war they started.

It is called the “Six Day” war, and was fought, if you can call it a fight, in 1967. It’s thusly called the six day war in that it only took six days to beat back the many Arab nations who attacked Israel, as they always do. And funny thing about that. Just as America doesn’t attack unless first being attacked – so it is with Israel. They have never attacked another nation, Arab or otherwise, without first being attacked.

During those six whole days, the Israeli military beat back the aggressors and legitimately captured some of their territory, which they then used as a buffer against further attacks. In all, Israel captured the Gaza Strip and the Sinai Peninsula from Egypt, the West Bank (including East Jerusalem) from Jordan, and the Golan Heights from Syria.

Then after Israel redrew their “property” lines, the loser Arab nations objected. To this we say, too bad for you. You might still have that “disputed” territory if you weren’t so overcome with erasing Israel from the map all together.

So that’s what the fuss has always been about. Back to what all in the leftist media are calling the Palestinian “protests.”

This I love. I love how the left keeps calling what the Palestinians are doing at the Israeli border protests – white washing the difference between a protest and a riot.

The Post describes them as, “The 50,000-strong protest was the culmination of a campaign — led by Hamas and fueled by despair among Gaza’s 2 million residents — to break the decade-old blockade of the territory.”

Others have the nerve to call it a march and a demonstration – maybe like a parade. Yeah – that’s it – a parade.

Okay – last I checked, protests, marches and demonstrations don’t involved burning tires and slinging rocks and fire bombs at Israeli soldiers. The definition of a protest is an orderly expression or declaration of objection, disapproval, or dissent. A riot is noisy, violent public disorder caused by a group or crowd of persons.

And another thing. I will hazard a guess, and I’m sure it’s accurate, that at least 90% of the violent Palestinians have no idea why they are doing this. They, like most college campus protesters in America, have not a clue why they are there. They were told to be there, act a certain way, and they comply. All the while the “organizers” of the riots send these mostly young, angry men out there as purposeful cannon fodder, hoping for footage of Palestinian deaths which they can then broadcast to world, to garner sympathy from the dolts on the left.

And just one more thing. Where are the environmentalist whackos? All we can see at the border is the black smoke of burning tires, set by the peaceful Palestinian protesters. If this were some right-wing militia group burning hundreds or thousands of tires, the green weenies would be pitching a fit over the environmental impact this will cause to the region. Yet we hear nothing.

You on the left can whine all you like about your precious “two state” solution and the evil Israeli aggressors, but we in the real world see this for what it really is, and are glad as we can be that we finally have a president who sees through the nonsense and is siding with the good guys. It’s about darn time.