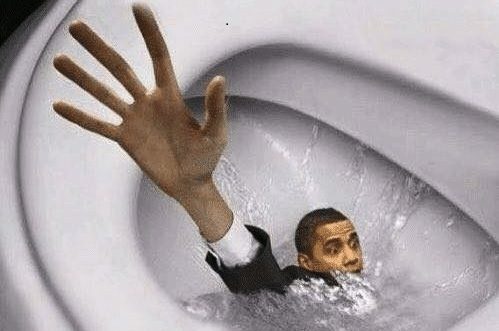 The opposite ideologies of Obama and Trump are starkly black and white.  No doubt maniacal liberals will immediately scream “racism” at that analogy.  Let them.  That is their sickness and it is to be slapped in the face, spit upon, and ignored.  What Obama believes to be true and what works is based on his foundational beliefs of being raised a Moslem and indoctrinated into socialism.  What Trump believes is true and works in based on his foundational beliefs of being raised a Christian and practicing capitalism.  The latter became a billionaire while the former achieved nothing of note except winning popularity contests by duping people into believing he believes what he does not – that America is a great nation and her people are the most charitable, caring people in the world.

This is a short list of the beliefs of those who adhere to Obama’s doctrines and Trump’s doctrines: 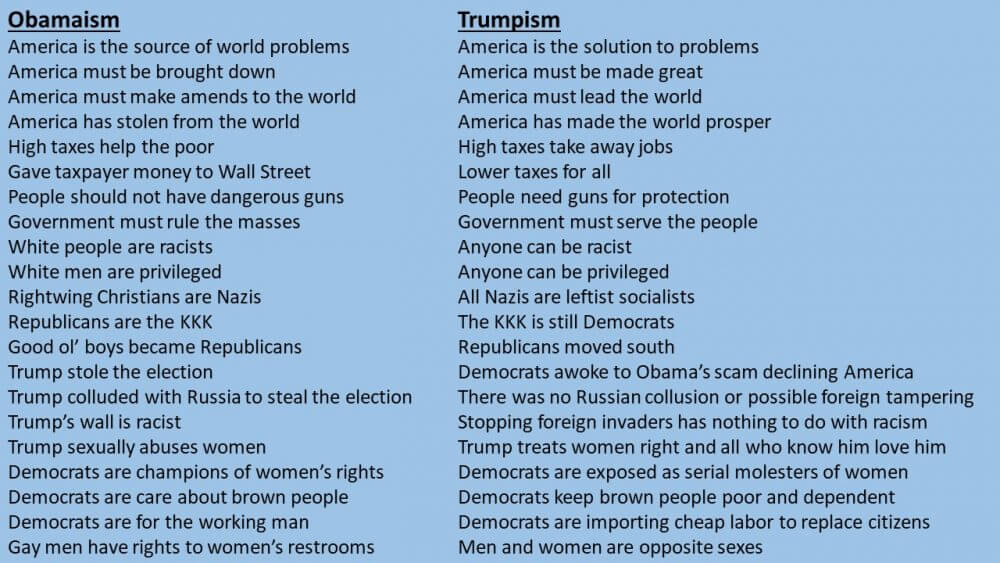 Trump flies while the media lies

This list can go on for another hundred or more items that Obamaism represents that are corrupted and used to smear, slander, and damage America, and that Trump is flushing down the toilet to fix everything that ails America.  Obama’s hope was to fundamentally change America from a Christian capitalist nation in to a Moslem socialist sh*thole.  Republicans are the positive pole of American politics as pro-Americans, while Democrats are the negative pole believing America’s Christian foundation to be evil.  This is not their leadership guiding them to this, but people choosing the pole to which they gravitate.  People follower the leaders who promote what they want, which trashes the liberal belief that conservatives are mind-numbed robots following Trump.  They don’t understand that the reason conservatives see liberals as mind-numbed robots is not because they are being controlled by their leaders, but because they are duped by their leaders to disbelieve the facts that prove them wrong.  Liberals cannot survive in debate because of this which is why they always devolve into name calling and stone throwing.

There is no doubt that people can be contrary due to negative emotional egos from which leftists all suffer.  One man can work hard to become wealthy and another man will resent him for it.  One man can stand for righteousness and another will detest his morality.  One man believes in giving, while another believes in taking.  One man believes there is only truth and lies, and another man believes lies can be truth.  This is the dichotomy of Trump and Obama, of the Right and the Left.  The leftist media speaks nothing but smears of Trump and presents his every word and act as a negative either being stupid, destructive, or bogus.  They will never tell their viewers or readers that Trump’s policies of undoing Obama’s dictates are making America’s economy soar while defeating America’s enemies abroad.  They tell them that Democrats are not conducting their massive voter fraud campaign of allowing invading foreigners to vote illegally even as Democrat governors are publicly announcing their programs to do just that!

Donald Trump is a man of great achievement, while Obama’s only achievement was to pull off the greatest con in history by duping millions of Americans into making him, the true hateful, petty reprobate of the pair, the most powerful man in the world.  Everything Democrats say is Trump’s character is the character of Obama, Hillary and Bill Clinton, and other leftists.  Obama used the power he acquired to bring America down while pretending he was working so hard to make America better, and then blaming Republicans for the failures he created.  As America declined he would make speeches to protect his façade of how his efforts to improve America were being obstructed by Republicans, while all of his achievements were affected to crush American businesses by extorting those that did not bow to him.  His stimulus was nothing less than stealing from future taxpayers to put them into generational debt slavery.  All he accomplished was to squander America’s wealth by giving trillions of dollars to his leftist Wall Street donors, and pissing away billions on America’s enemies like the Muslim Brotherhood to renew the Jihad of Muhammad in the 21st century.

Obama corrupted America’s culture in extremis by putting men in women’s bathrooms, attempting to force gay marriage and abortion on the Christian church, importing Moslems and Mexicans to usurp American citizen’s rights, crushing businesses with choking regulations even to the point of shutting down coal mining and offshore oil drilling energy sources via dictates, and empowering America’s enemies like Iran by giving them billions of dollars by creating his own policy deal of appeasement and permission for their development of nuclear weapons claiming he brought peace.  If WWIII comes soon it’s birth can be traced to 2008 when the Left elected a socialist Moslem dictator a President of the United States with the help of RINOs who put a centrist wimp on the Republican ballot.

Now America has made the correction necessary to undo the damage Obama did and President Donald J. Trump is flushing Obama’s dictates and legacy down the toilet where it belongs.  What must be guarded against is the next Democrat Hitler-wannabe from taking charge, reversing Trump’s corrections by undoing tax cuts, reinstating choking regulations on businesses, opening the borders and voting to foreign invaders, and doing even more damage.  Presidents should never have power to shut down a business with the stroke of their pen.  Obama shutting down coal mining was not to “save the world” from burning fossil fuels.  America’s electricity depends on coal in 80% of power plants.  All he did was make America dependent of foreign sources and subject to extortion as we were when dependent on Arab oil in the 1970s.

“Pulling out of the Iran Deal will make it harder to deal with North Korea or anyone else.  Pulling out of that deal makes America less safe and less trusted.” – Hillary Clinton

The woman responsible for Benghazi, and who instituted Obama’s foreign policy of appeasing Iran and empowering the Muslim Brotherhood, has no business trying to tell Trump how to deal with foreign enemies.  Obama didn’t get the Norks to come to the table except to have him bow to them.  The Iranians may be full of their Jihad bluster now, but that won’t last when Trump twists their necks.  Pulling out of Obama’s executive deal has nothing to do with other nation’s trusting America.  Two months ago Democrats were all aghast that Trump was provoking Kim, but now it is seen that he cowed him.  He may want to attempt to assassinate Trump, or make himself appear his equal, but make no mistake that Donald Trump is the adult amidst this pack of colicky children.  And what’s more, Obama’s other Secretary of State, John Kerry, in taking actions to undermine President Trump’s initiatives is not just violating the Logan Act, but is committing treason.

Does it ever occur to Democrat voters that when America’s enemies take their side in political disputes with Republicans that they might be on the wrong side?  They are all up in arms over Trump trashing Obama’s Iran deal as if it were beneficial to America when it was only beneficial to Iran’s plans to develop nuclear weapons.  It was not a treaty, it was not an executive agreement, it was not even agreed to and signed by the Iranians, and therefore it was not binding on them.  They didn’t even agree to anything in it.  It was just Obama’s executive order to appease the Mullahs that chant death to America every day.  It was Obama’s attempt to put the final nail in America’s coffin after giving Iran $150 billion to fund their terrorists and develop nukes to start WWIII in the name of Allah and the Jihad.  To Democrats who are saying that Trump’s actions makes the world more dangerous the answer is yes it does – for IRAN!

The Left in America is not a different political party with a unique perspective on how to make America great.  They are the America haters that want Democrats to overthrow the Constitution and become rulers.  Americans are in desperate need of an education to open their eyes to the Democrats as they import foreigners to supplant their defecting voter base.  Try as they might the liberal media cannot fool all the people all the time, and even the some of them they have fooled are opening their eyes.  Trump is easily flushing Obama’s legacy because it was built on a house of cards from the Oval Office.  There was no treaty with Iran to make them stop developing nukes, just as there was no law to enforce DACA that was Obama’s written permission to invaders to stay in the USA, and just as there was no treaty with the nations that signed the Paris Accords to reduce CO2 pollution because they all know it’s bunk!  It was all hokum designed to dupe the ignorant masses who believe that the Jihad is good religion, that foreigners have a right to invade and steal from America, and that technology is killing Mother Earth.  When they grow up and realize they’ve been used as fools they rebel and sink into the depression of denial.

It is up to Trump and conservative Christian Republicans to overcome the liberal Democrat media propaganda machine and inform them of the truth – that America is good, and that Republicans are the ones that built this great nation of liberty, while it has always been Democrats who have sought to take it down to keep slavery and servitude to the elites in place.  They are not progressives, but the ultimate regressive government ideology.  Had Obama’s policies been beneficial to America they would have been made law by Congress.  Obama’s people, like David Axelrod, are all trying to portray Trump’s actions as that of a jealous hatemonger wanting to dismantle Obama’s legacy because he’s black.  The blackest thing about Obama wasn’t his skin, but his hateful heart and lying mouth.  Axelrod striving to paint Obama as the victim of Trump’s malice falls on its face if asked about Obama’s subversive army of fascists he has arrayed against Trump both on the streets and in the Deep State bureaucracy.  In the final analysis, Trumpism is pro-American while Obamaism is anti-American.