The RNC Breaks Its Own Rules! 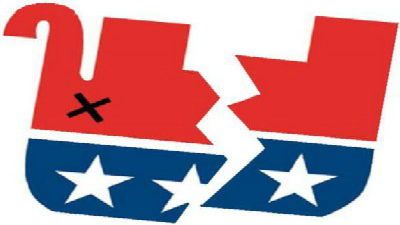 To protect Donald Trump for the embarrassment of losing this convention. Reince Priebus is out in the halls strong arming delegates, while the committees are breaking three rules. 1-Not allowing a roll call, 2-not giving names of who backed out of the petition to have a roll call, and 3rd, lying about the number of states that submitted petitions. This is historic in the fact that the RNC is now practicing Communism in its rawest form.

The establishment hates Donald Trump so much that they just broke their own rules in order to avoid EMBARRASSING him. What a crock full of #trumpleweeds being spawned about in the hall of the GOP Convention. ‘I know what I heard – the ‘Ayes’ did NOT HAVE IT!!’ – Smerconish says the RNC lied about the vote.

It has been confirmed: there were 11 states, not 9. The RNC/Trump campaign blatantly lied and violated the convention rules. The system known as the GOP is systemically corrupt. It either corrupts our champions or executes them. Reince Priebus and Donald Trump at this point with the bully tactics, and instigation of false lies to garner a specific outcome can be considered a violation of the RICO Act.

This isn’t our party anymore! I’m disgusted by the GOP. They have NO respect for our principles & values! They didn’t call the vote when they were supposed to so they could twist arms. Then they lied about voice vote. Mike Lee on chaos at the convention: “We are now in uncharted territory. This is unheard of” as chairman was ignoring delegates asking for a vote. The PARTY IS SPLIT because of Trump. It won’t come together as long as he is in the picture. The GOP is not my problem anymore. It left me when it started being a bully and doing illegal activities.

This convention isn’t a party. It’s going to be a sad week. It’s the period at the end of a long run for the Grand Old Party. Reince is leading the party over the cliff! Big time donor and one of the folks who has been trying to raise money from others for Donald Trump, a supporter and a fan of Donald and his campaign, Gary Emineth has just resigned in protest after the RNC railroading over the petition for a roll call vote on the rules package.

Emineth, you may recall, was the one potential Donald Trump delegate from the state of North Dakota, back when Ted Cruz successfully froze out the rest of the state. After Trump locked down the nomination, Emineth was one of the major players pushing to get big donors to line up behind Trump and open up their pockets.

The problem here is not only the miscarriage but the fact that the rules change proposals were not merely from anti-Trump voters. They were changes proposed by those who were attempting to make changes to the way things operate so they do not favor the establishment or Democrat and independent voters.

But the RNC and the Trump campaign spent all day in a huge effort to quash all opposition, ultimately successful in the spectacle we all saw earlier this afternoon. People are not happy about it, and now the fallout includes people who are decidedly pro-Trump.

Today is the day the GOP elected Hillary Clinton president of the United States. @Reince I’m embarrassed for you. The future is being created for the end of the RNC, and if the #nevertrumps, the #freethedelegates and the #delegatesunbound do not give up, it can be the beginning of a true Constitutional Conservative party, built on the foundation of the Constitution, and no longer will we have to worry about egomaniacs, and power hungry people trying to rape the cause, destroy the movement, or use false tactics to gain the power. Today is the end of the RNC/GOP, but it can be the beginning of the Constitutional Conservatives if those disenfranchised GOPers will stand together strongly to beat Donald and Hillary in November….