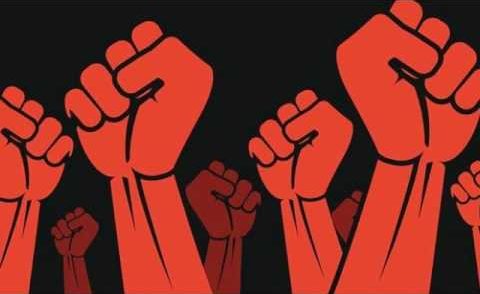 Now that the Democrat Party convention concluded their class warfare rally, those with saner minds are left with the task of identifying the magnitude of the sociopathic disease that infects the vast mindset of the worship government sect. The rhetoric of the Left has little trouble with identifying the ills of the world, but when the collectivists start to rattle off their measures to make the world safe for democracy, the ugly fascist face of totalitarianism emerges. The bond among statists, span all ideological spectrums. Commies and Nazis share the same gene. In Amerika, that same defiled DNA proliferates in all the half-wits that still believe that government is or can be a force for good. Essentially, the people are a herd of corruption enablers.
Maybe the most ridiculous spin out of the mouths of the entitlement strivers references a CNN report, that a NBC/Wall Street Journal poll showed that 0 percent of African American voters intended to support Mitt Romney over President Barack Obama. On face value, this claim is absurd. However, by digging deeper into the attitude that the mainstream media characterizes for the black community, the only conclusion a reasonable person can draw, is that the true racism resides in the controllers of the popular culture and its perverted message.In order to appreciate the linkage between bigotry and subservience, the role of stupidity needs acknowledgment. Multitudes of all races share idiocy, often in the same way, by the institutional levers of control. The inference that any particular people would give consent to a betrayer of individual rights, based upon the shared color of their skin, is an insult to everyone.

The executive order practices of the Obama administration are inherently authoritarian. The coercion used by the State to enforce the power of the ruling elite is integral to the survival of the regime. The ridiculousness that gives fake relief and promises phony rewards, is often called – democracy.

This subject, seldom analyzed in a vacuum, takes on the persona of the ideologue. Richard Lichtman provides one such example, in an essay, Totalitarian Democracy, which cites the work of Sheldon Wolin.

“Since the time of the Civil War and the formation of the American colossus and its dual economy of corporate domination and social remainder, the course of capitalist domination has been set. Whatever further “progressive” change has been achieved has forfeited its full potentiality to the tendencies of an expanding corporate control. In this process, democracy has been more and more corrupted, as Sheldon Wolin notes in “Democracy Inc.: Managed Democracy and the Specter of Inverted Totalitarianism,” a work that has been blatantly ignored.

The United States has become the showcase of how democracy can be managed without appearing to be suppressed. This has come about not through a Leader’s imposing his will or the state’s forcibly eliminating opposition, but through certain developments, notably the economy, that promoted integration, rationalization, concentrated wealth, and a faith that virtually any problem from health care to political crises, even faith itself – could be managed, that is, subject to control, predictability, and cost-effectiveness in the delivery of the product. Voters are made as predictable as consumers; a university is nearly as rationalized in its structure as a corporation; a corporate structure is as hierarchical in its chain of command as the military. The regime ideology is capitalism which is virtually as undisputed as Nazi doctrine was in 1930s Germany.”

This topic, examined in more detail in the essay, Inverted Totalitarianism and the Corporate State, is worth a review. Mr. Lichtman being the “Predictable Progressive” concludes his remarks with a stunning attitude that perverts the natural order of the meaning of individual liberty.

“The Tea Party and other such calamitous confusions will eventually come to the sort of end that has destroyed all those who do not understand just who is the master and who the servant. But a great deal of suffering can be visited on the nation while this defeat is being enacted. Now is the time for all of us to engage in the intellectual activity of understanding what forces are in play and the practical task of forcing back and destroying the monstrous army of these protofascist directors and retainers.”

Ivory tower utopians march in the ranks of statist totalitarians by choice. Many seek to lead the charge. The “rank and file” that digs the ditches, usually lacks the skills to think independently for their self. Nonetheless, they are usually the first to rally to the cause of their sanitized Führer that preaches hope and change, with every loss of freedom. No one political theory has a monopoly on despotism. Yet the “peaches and cream” slogans of fairness and equality, that come from the ultra extreme wing of the Democratic Party, out does the worst of the GOP civil libertarian destroyers.

Dumb, Dumber and Dumbest is the end product of the collectivist education system that indoctrinates impressionable brains with reverence for the dependency society. Mush minds come out of this corrosive process. Voting for entitlements and the expansion of the democratic totalitarianism becomes the norm.

The short DNC Video: “The Government Is The Only Thing We All Belong To“, is an anti-intellectual message that appeals to government thugs and parasites. The underprivileged are permanent wards of the state. Those that lack self-esteem are usually products of government school pedagogy.
The Democratic Party Platform is just as immaterial as that of the GOP. However, the DemocRATS are more adapt at pushing the most collectivist policies that consistently strip away the last remnants of a constitutional republic. Democracy for the progressive statist translates into direct democracy, because they are the most adamant about open borders.Do not deduce that RepubliCANTS are protectors of traditional values or states rights. The fusion of the despots is systemic because both power structures rely upon a false dialectic, while both just wear different style uniforms.
One of the trademarks of the presidential imposter is viewed in the YouTube,Obamas Domestic Army? Recruiting new legions of mercenaries for domestic social control, from the gangs of idle hoodlums awaiting their “just due”, typifies the abnormal mindset of democratic despotism.Watching the culture of prerogative democratic diatribes, advocating the entitlement society, could never take root unless the peasants were conditioned to demand their total cradle to grave guarantees. The pandering is intolerable. The trade off enslavement that is conditional for receiving benefits goes unnoticed to most of the bottom feeders. What little rationality and critical thinking remaining on the Progressive Left, erodes with every election cycle.

The remorseful lesson that the majority of voters fail to admit is that the election pageant never provides the alternative to rid the country of collectivist politicians. The obvious reason is that the dependent masses crucify any candidate that dares champion the principles of liberty and personal responsibility.

The Democratic Party is especially adept at pimping for the welfare state. The utter failure of the crazy schemes, self-indulgent programs and social benefits, at taxpayers’ expense; has primed the public for surrender. Sacrificing individual dignity is a small price to pay for a place in the government check queue. The dire net results from the “Great Society” are all around us. It resembles the conditions that gave rise to Charlie Chaplin’s, The Great Dictator.Ironically his egalitarian political views, lent criticism that he was a Commie. From Chaplin’s famous speech, his words run amok, when applied to the requirements of the Democratic Totalitarianism that now engulfs every aspect of the Obama version of socialism.

What kind of conduct should you expect from a Reich that wants to field an AmeriCorps, civilian national security force. This is the Obama standard for pledging your “Good AmeriKan” credentials for a national socialist passport. Have we not learned from the European experience? The oath to the psychopathic beloved leader is creating our own domestic holocaust.
The idolization of Hitler is reminiscent of the flaunting over Barack Hussein Obama in 2008. Today, there are no excuses for not knowing that this demigod is a tyrant or that his plan is to enslave the nation. Pride in America the Stupid is a badge of admission to the Democrats Delusional Worldview. The Democrat convention of 2012 is just as pathetic as that of the GOP. The language and emphasis may seem to differ, but when you strip away all the empty words, you have a phony competition to head up the omnipresent corporate state.The ruling class and the suck-ups that pledge their allegiance to a State adoration, despise the defense of liberty. The metaphysical question of our age is, Why are we here? How will you answer this eternal and political question? It is evident how the useless-idiot will respond.