Republicans Lead with the Mantra – Whatever is Easiest 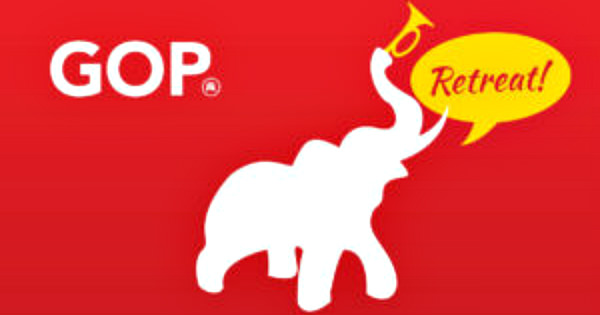 Do not be fooled by the Republican or White House spin that this budget agreement is anything but a total retreat and surrender to the MINORITY party – the Democrats. But hey – fighting is hard. It’s just easier to capitulate.

I was originally going to express it as a Republican give-away – but it isn’t. You see – you have to first possess something in order to give it away – like one’s principle or integrity. The Republicans possess neither.

On his radio show, an angry Mark Levin exclaimed that the Dems passed all of ObamaCare with a simply majority under reconciliation. Mark rhetorically asked how it is that Democrats seem to always know how to play the rules in the House and Senate – use parliamentary rules and procedures to advance their agenda – to get things done, and the Republicans don’t seem to. Is the GOP just not as smart as Schumer, Pelosi and the rest of the Mensa honorees in the Democrat Party?

Of course not. The Democrats, for the most part, are believers. No – they don’t really believe in standing up and fighting for the less fortunate. They believe in the leftist ideal of big government authoritarian control and spending. In other words, they are statists. Of course they would never describe it as such, but this is what it boils down to.

They seem to always get they want because they don’t compromise. And even if they appear to compromise, as in giving the President an additional $15 billion in defense spending and unpinning it from domestic matching, it’s barely a compromise.

Even Rush Limbaugh, who is a staunch Trump supporter, was confused and a bit perturbed during a radio interview with Vice President Pence. Pence went on Rush’s number one radio program  for one reason – damage control. And I’ll guarantee you Rush didn’t call him – he requested to appear. He went on only to attempt to spin this disaster into some kind of a victory. He would have been better off avoiding the limelight. In my opinion, Pence embarrassed himself.

But Pence just kept reverting to the talking point of defense spending and that this was a win – never answering Rush’s other charges. And did you know that repealing ObamaCare is no longer priority number one? Did you know that building the wall isn’t either? I thought they were. But Pence said: “Rush, let me be real clear. The number one priority of President Trump is to rebuild our military, to restore the arsenal of democracy.” Not that this isn’t vitally important, but it is a definite departure from earlier promises – is it not?

The bottom line is the difference between Democrats and Republicans. The Dems have a clear view of why government exists and how it should operate – and no matter how warped and unconstitutional we know it to be is of no concern to them. In other words – they have a set of core principles with which they will never compromise. And regardless of what we think of these principles, they are to be congratulated for not abandoning them.

Too many Republicans have no set of core values or principles. As Rush has said numerous times – they simply strive to be in the majority in order to control the purse strings. But, as is plain, they can’t, or won’t even do that. Now their core has become but one overarching principle or theme – “Whatever is easiest.”

I can’t blame the President or Vice President for the laziness, shiftlessness and cowardice of the Republicans. I will however blame him for signing this debacle. The President says he wants to shut down the government. Okay – do it. Don’t sign and let it shutdown – which for the gazillionth time, is not a shutdown, but barely a slowdown. Boy am I tired of saying that.