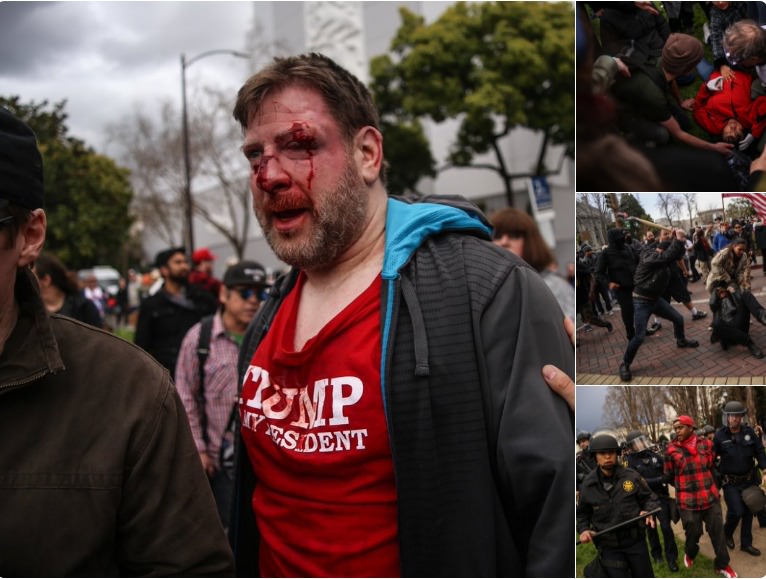 Ten liberal terrorists were arrested in California after physically attacking, bloodying, and in the case of an eldery gentleman, threatening the life of pro-Trump supporters on Saturday. The liberal thugs attacked the Trump rally in Berkeley, California with metal pipes, bats, 2×4’s, and pieces of wood according to police who arrived at the scene well after violence had gotten out of hand.

“At least two people, with their faces covered up, could be seen on video trying to set fire to an American flag, while a photo on Twitter showed the bloody face of a man who wore a T-shirt that said ‘Trump is My President.’” reported The LA Times.

Typically, the liberal media has barely reported on a story that highlights the thuggery and terrorist actions of the liberal left. Several rally supporters complained about the lack of intervention by police officers despite the violence shown below, a common complaint at pro-Trump rally’s in liberal states like this one in California. Despite the large amount of violence, numerous reports indicate that police officers refused to intervene, and only one suspect was arrested.

My fellow Americans, when will we wake up and realize our country and way of life is under assault from enemies outside our border (Islamic terrorists) and inside our borders (Liberal terrorists)? Political violence is here and it’s from the left. May God have mercy on their souls when true Americans wake up, rise up, and decide to defend themselves from these brutal liberal terrorists.

To all liberals – end the violence! Stop the madness before Americans do what they’ve always done – defend themselves from attacks both foreign and domestic with the finest fighting force the world has ever seen – an American citizen empowered by the Second Amendment.