Priebus and Sessions beset by Lack of Confidence 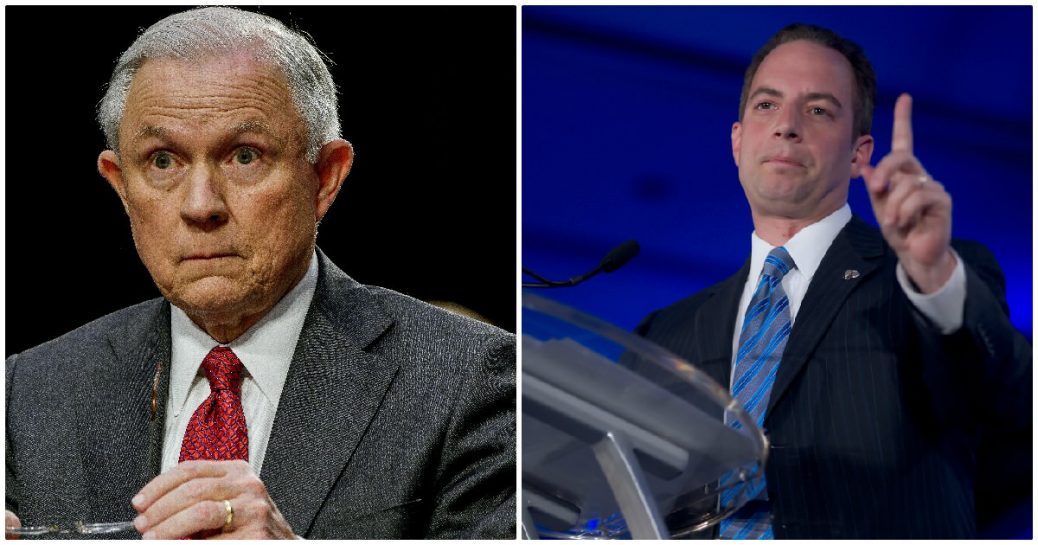 Obama embeds and Mueller are violating criminal law with their leaks and fishing expeditions to find some way to take down Trump.  Who can Trump trust?  This explains why he has his own children working with him.

Stories are coming out about chaos in the White House.  Of course, anything Democrats, the MSM, and RINOs say about the subject can be ignored as irrelevant smears.  President Trump could easily be substituted for the Marine in the WaPo joke, “The Biker, the Lion, and the Reporter;”

Donald Trump is passing the National Zoo in Washington, DC when he sees a little girl leaning into the lion’s cage.  Suddenly, a huge, hungry lion reaches out and grabs her by the cuff of her jacket and tries to pull her inside his cage.  The president jumps out of his limo, sprints past the little girl’s screaming parents to the cage, and punches the lion square on the nose.  The stunned lion releases the little girl and staggers backward, whimpering in pain. The president snatches the little girl back to safety and returns her to her terrified parents who thank him endlessly.

A reporter for the Washington Post witnessed the whole event. “Mr. President,” he says, “that was the bravest, most gallant thing I’ve seen a man do in my entire life.”

“Why, it was nothing, really,” says President Trump modestly. “The lion was behind bars. I saw this little girl in danger and I just reacted instinctively.”

“Well, I’ll make sure your heroism won’t go unnoticed,” the reporter responds. “I’m a reporter for the Washington Post and I’ll make sure this story is on the front page of tomorrow’s paper.”

The journalist leaves.  The following morning the biker buys the Washington Post to see news of his actions and sees this headline on the front page:

The question is not what is wrong with Trump, but what is wrong with the people in his administration.  There have been hundreds of leaks and sabotages of the Trump team that have been beyond felonies and well into the realm of treason.  While leftists damn Trump as committing treason in their Russian collusion fantasy, real treason has been committed in Washington by Obama embeds, not to mention the felonies and treasons of Democrats.  Sessions, with whom Trump is upset for recusing himself from the phony Russia investigation, an act that is allowing Mueller to violate 4th Amendment rights of everyone involved, is being chastised for not standing up against these crimes.  Former AGs Holder and Lynch didn’t recuse themselves over investigations into Fast & Furious, the IRS targeting TEA Party groups, and the Clinton investigation meeting secretly with her husband but being found out by happenstance.  The question is not if Sessions is doing what is ethically responsible, but if he is standing aside while Trump, his family, friends, and anyone who associated with him in his life are being subjected to persecution.  This is not an investigation into a crime, but a fishing expedition.  This is not just a witch hunt, but Mueller is trying to force an error by anyone whom he can then charge with a crime.

For example; if a woman charged you with rape and the initial investigation found you were at a public event in another state when she claims it happened, and she refused to take a rape kit exam, then there is no evidence of a crime and the matter would be dropped.  The police do not have a right to then investigate your finances, your family, your friends and associates, in an effort to find someone who did something wrong for which they can then be extorted to turn on you and say you did commit the crime.  This is what is happening in the Russian collusion investigation, and it is a felony crime!

In light of this, Sessions needs to unrecuse himself to the degree that he takes Rosenberg and Mueller, both Obama/Hillary animals, and put them down for the rabid mongrels they are!  Why did Sessions take this job if he’s going to allow high crimes to be committed under his nose?  No wonder President Trump is frustrated with his inaction!  Sessions may be performing wonderfully over Trump’s agenda, but what will that matter if Trump is taken down on the basis of lies?  Is he there to accomplish the president’s agenda or sabotage him?

Reince Priebus is another Republican who jumped eagerly onto the Trump Train and this week he, too, got into it with Trump’s new communications director, Anthony Scaramucci.  Has Priebus been one of the main leakers or is this a leftist media creation?  The Left has, over the last few weeks, sought to divide the Trump team by saying that Trump, Jr. and his son-in-law Kushner were at odds when they were not.  They tried to say Ivanka supported the climate change scam and Bannon was backstabbing everyone.  Most of these can be dismissed as media lies.  “Mooch” simply got a quick lesson in not trusting leftist media reporters.  The leakers are still obviously Obama people that should have been fired and should now be prosecuted.  Hopefully, Sessions will have the FBI get on the ball and start investigating real crimes rather than continue chasing after their tales of Russian fantasies.  And Mueller & Co. need to be given the boot and then slapped in irons and their criminal actions investigated.  Democrats believe themselves to be beyond reproach and inviolate, yet time and again they are the ones committing felonies and treachery.  They still refuse to allow their servers, whom they claim the Russians hacked, to be examined by the FBI.  Of course, they don’t want their treasons and backstabbing of the American people to be found out.  We know that they cheated Bernie Sanders in the primaries, and that Hillary deleted thousands of emails under subpoena.  When are these crimes going to prosecuted?