President Trump is Worried that there’s a “Storm” Coming 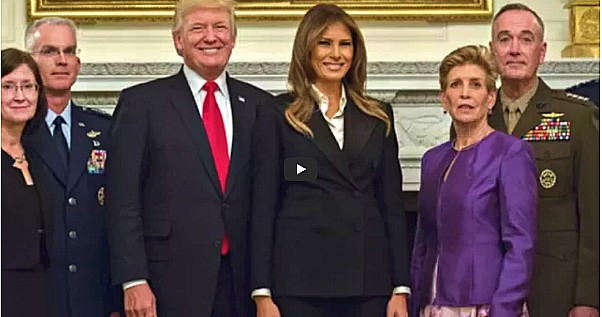 At a recent photo-op with high ranking military officials and their spouses, President Trump happened to mention that we could be experiencing “the calm before the storm.”

He followed the cryptic comment up by announcing that “We have the world’s greatest military people in this room,” the president said. “I will tell you that. And we’re going to have a great evening.”

The leftwing media has done quite a bit of handwringing over the President’s comments, with no less than MSNBC’s Lawrence O’Donnell fearmongering about what the President could have meant.

I think it’s more likely that standing there with his military leadership, President Trump was reminded of all the dangerous situations currently playing out around the world, and just for a moment he spoke the worry that was running through his mind.

Facing danger from North Korea, Iran, Turkey, Syria, Russia, China, Cuba, Venezuela, ISIS, Al Qaeda, the Muslim Brotherhood and destabilization in Yemen, Libya, Egypt, Lebanon, and elsewhere… it’s likely that the President simply has a lot to worry about and being with his chief military advisors reminded him of the weight which he carries.

This moment of naked thought is not a reason to fear monger about our President, it’s a reason to support him, to pray for him, and to encourage him to hold the line.

If only the left would put our national interests before their hateful partisan attacks.