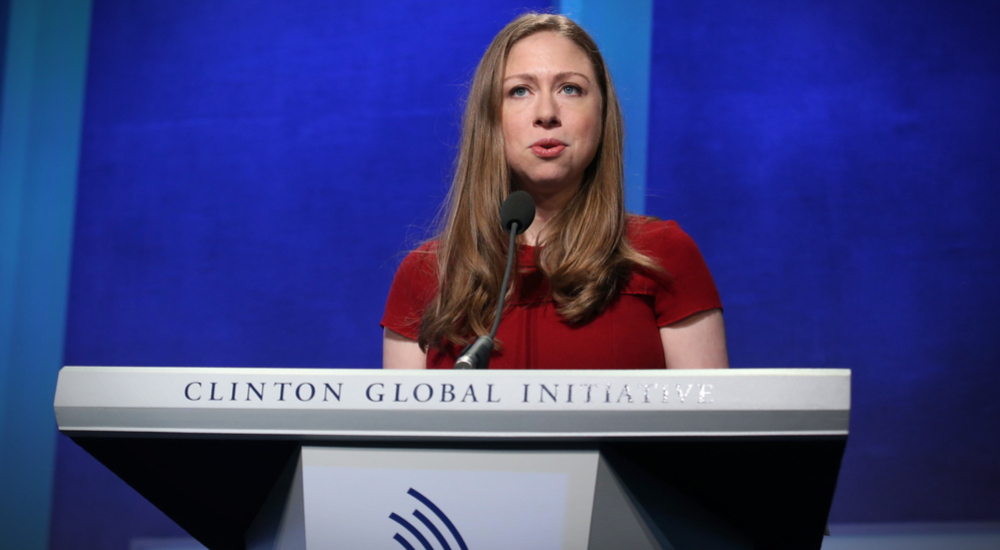 Bill and Hillary Clinton’s daughter, Chelsea, says, “Donald Trump degrades America.”  Here she is the daughter of a multiply charged serial molester and rapist of women, a man who lied under oath causing him to be impeached, and a woman who declares herself to be a champion of women after destroying the women who were her husband’s victims.  These are the people who slander Trump claiming he is “an admitted serial molester” from his words on the Access Hollywood tape where he said no such thing.  With Hillary’s defeat and the dissolution of the Clinton Crime Family Foundation, Bill and Hillary are hoping and praying their ugly daughter, who slanders Ivanka Trump for her beauty, will be the next feminazi to take up the Clinton torch and occupy the White House.

The Clinton Crime Family has not stopped whining about Hillary’s loss and blaming everyone but themselves for their ideology that was exposed by Obamaism.  She was handed a top position right out of college in the leftwing media paying almost seven figures, yet she is nothing but a typical leftist manufacturing stories and fostering hate against the righteous.  As leftist fools like CC has tried to slander Trump as a womanizer, they have exposed and brought down many of their own like Harvey Weinstein for being the misogynist pigs they pretend Trump to be.  Donald Trump has been surrounded by the most gorgeous women in the world and has always been praised as being the perfect gentleman.  He has always been praised for his honesty and forthrightness, his patriotism, and his morality – until he ran for president as a Republican.  Then the leftwing smear machine went into overdrive, attempting to wear the mantle of morality so they could slander the righteous as immoral, and it has blown up in their faces.

Since Trump’s inauguration, Obama has unleashed his fascist armies and initiated a coup by his Deep State operatives to undermine and sabotage his efforts to undo Obamaism and make America great again.  Liberals have become so incensed at Trump’s success in dismantling the Obama regime’s dictates that they have taken to demonizing anything and everything that makes America great, even to the point of some crazy liberal saying, “Amazon is ISIS” because they reject locating in Seattle that has announced they will tax them to death.  With his election, all the rules of decorum, dignity, and decency went down the toilet of Obamaism.  Liberals will never admit it, but Obama spoke more rudely, used more vulgar language about Americans, and slandered more good Americans than anyone in politics.  He used the power of the presidency to go after Republican donors and supporters to steal their finances, shut down American energy, and persecute Christians.

Barack Hussein Obama and the Democrats attacked Christians in America on a daily basis with the intent of destroying them by disallowing God in schools, tearing down monuments, and attempting to force abortion and perversion into the church and women’s bathrooms.  When you kick God out the door you open it to Satan, and Obama has used his power to force Islam on America and Europe with his foreign policies.  He funded the Muslim Brotherhood to renew the Jihad from which many have fled, and then allowed them to infiltrate the West as refugees seeded with jihadi terrorists.  The left has used their propaganda machine of the entire leftwing media to slander, mock, and smear all things American to conceal these facts, but Republicans, who don’t forget, have their eyes open unlike the stubborn asses of the Democrat Party.

Liberal fascist’s resistance movement is seen by them as resisting Christian conservative Nazism.  In their delusional ignorance, they believe the far right to be Nazis rather than Christian, just as many believe Hitler was a Christian.  This is the kind of nonsense that passes for good sense among liberals.  They don’t know that they are being led by fascists and exhorted to commit violent uprisings against righteous people.  It is a delusion that will lead to their own destruction, and no doubt they will blame Republicans as Democrats inflict foreign conquerors on them and take away all their freedoms.  This will come as a surprise to no one as they long ago convinced blacks to put themselves back under the Democrat yoke of their ancestor’s former slave masters.