A Patriot Speaks at the Democrat Convention – How Odd 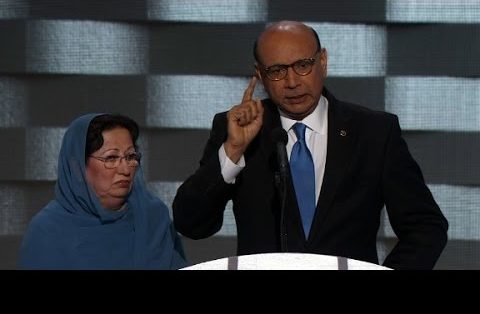 The political world is buzzing over Khizr Khan’s democrat convention speech the other night, in which he urged his fellow Muslims and immigrants not to take this election lightly.

His speech started well – very patriotic – a story of an immigrant family who, in 1980, came to America with little or nothing. Khan said that with hard work they “could share in and contribute to its [America’s] blessings.”

Well, sir – you sounded very sincere – and if you were – why on Earth did you choose to speak at the hate-America and blame-America-first convention? If you have been in this country for any length of time – and you have – you should have learned that the democrat party is party of no work, not hard work. Its convention was one speaker after another either demanding or promising some sort of big government giveaway.

And why is Mr. Khan urging immigrants to not take the election lightly? Last I checked, “immigrants” are not supposed to be allowed to vote – or does that just apply to Republican immigrants.

Khizr then spoke of his son, army Captain Humayun Khan, who was killed in action in Iraq in 2004, earning both the Purple Heart and Bronze Star. He spoke proudly of his hero son, as well he should. But then things got political.

He then brought up the Constitution. Oddly the crowd cheered. He asked whether Donald Trump has ever even read the document. Interestingly – I’ve asked the same of Mr. Trump. Khan then pulled a pocket Constitution and waved it about to more cheers from the crowd – which is again odd, because I’ll bet you dollars to donuts (hat tip: retired Marine Major General and my old wrestling coach, Ronald K. Nelson) that 99.9% of the hacks in the hall have never read or even seen a Constitution. I mean other than to look for loop holes.

At any other time Khan’s hero son would have been called a murderer or baby killer by the same people cheering and tweeting about his father’s courage. It’s common knowledge – the left’s disdain for everything military – that only the poor and stupid join the armed forces. Recall it was our brilliant Secretary of State, John Kerry who said in 2006: “You know, education, if you make the most of it, if you study hard and you do your homework, and you make an effort to be smart, uh, you, you can do well. If you don’t, you get stuck in Iraq.”

I understand Khan’s dislike of Trump – he’s bought the whole Trump anti-immigrant, anti-Muslim nonsense – but you don’t go supporting the same people or person who literally abandoned our heroes in Benghazi – or an administration whom Hillary was involved in that has so severely downsized the military as to make it almost impossible to engage more than one foe simultaneously – and worse. And judging by the condition of our latest Aircraft Carrier, the Gerald Ford, which appears to have failed most of its quals – we are in bigger trouble than I thought.

I wonder what his hero son would think of his father speaking at the lay-about, anti-military democrat convention. As I stated, it is certainly no secret that democrats are anti-military. Not anti-war – just anti-military – as democrats have gotten us into many more wars than republicans.

It is said that the son, army Captain Humayun Khan, was a huge fan of Thomas Jefferson and read most of Jefferson’s writings – even dragging his father to the Jefferson Monument. Thomas Jefferson was the consummate small-government, freedom and liberty advocate. Yet here was his own father, up on stage, extolling the virtues of a candidate and a party which would cause Jefferson to roll over in his grave – a party representing that which is the furthest thing from Jefferson’s vision of a nation.

I’m not sure of Khizr Khan’s motivation for endorsing the anti-constitutionalist Hillary Clinton. I supposed he has just bought into the anyone but Trump line. I get that – but to then actively and openly support a candidate who is hostile toward the Constitution and will sell America to the highest bidder – I don’t get.