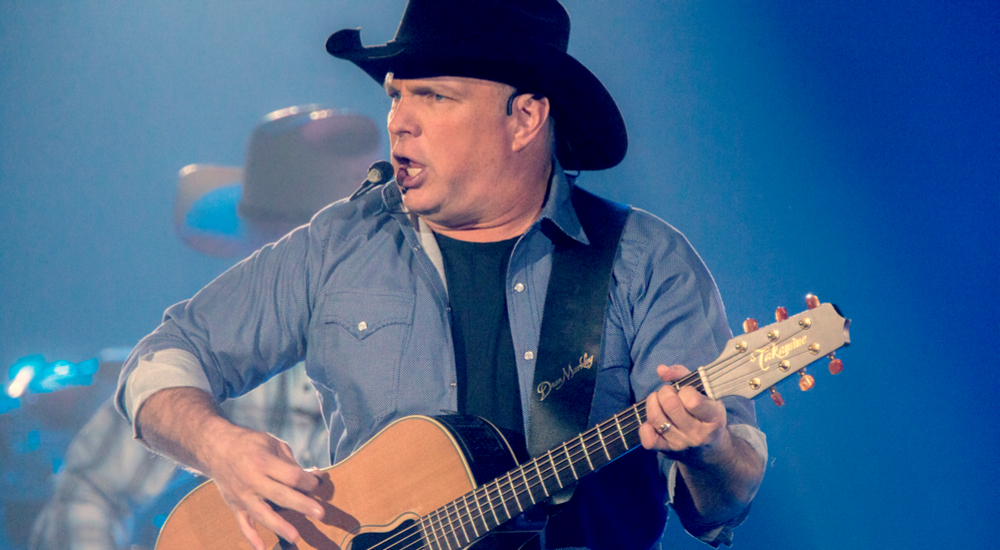 Editorial credit: Sterling Munksgard / Shutterstock.com
University of Notre Dame 12/29/18. Last night – (Friday-28th), a country singer not only performed in the gigantic Notre Dame football stadium but did so before a crowd of over 85,000 attendees, meaning capacity.  There were also a couple thousand extra seats set up around the stage also filled. The event was televised by CBS. A tip of the beret to CBS TV.
Some naysayers speculated that there was no way any country singer would fill that stadium, but Garth Brooks did! And this was the first time ever that Notre Dame Stadium presented a country singer.
Brooks noted that practically every young man participating in sports have said their dream is to play this place (Notre Dame Stadium) That would be the ultimate. Brooks then confessed that he too had such a dream…to play this place.
The off and on rain, heavy at times, did nothing to slow down the pace of the Concert. It was all perfectly spaced, timed and ran smoothly from start to finish. The spectators did not mind the rain. They were, at last, attending the ultimate concert of their favorite singer-entertainer.
Brooks has sold over 148 million albums. Only the Beatles have sold more. AMAZON furnishes his music free all day and night.
Close-ups of the enthusiastic audience showed them lip-syncing practically every song he sang having obviously heard each of his hits many times.
Garth Brooks is a country singer entertainer first class.  It is to be mentioned that during his fast moving two-hour program, there was not one political dig against our president, nor any “F” words used or other curse or swear words.  Garth Brooks has too much class for that.
Brooks is such a great entertainer that he did not need to resort to such trash to get a reaction from the audience. There was plenty of reaction the moment he came on stage, he is that popular.
HOW REFRESHING! This is what show business was meant to be, family entertainment. And Brooks managed to make that humongous crowd feel they were in an intimate setting the way he worked with the crowd, acknowledging all who were there. Nobody felt invisible but indeed, part of the family…part of the action. This was an official ‘family night out.’
There were several extended runways from the platform going into the crowd. Brooks used those frequently so that every single person in that mass crowd felt recognized even those in the highest tiers of that stadium.
Brooks had that entire crowd in the palm of his hand from the very beginning, with his personality, delivery of his songs, and his playful interaction with his other musicians as well as members of the audience.  They all showed that they genuinely liked each other.
Every musician was first class. There were absolutely no lulls in the program. It went along smoothly without letup from beginning to end.
This show could be labeled; God, Family, Country, and Americana. Those in the show all dressed neatly and on purpose.Also, the audience also was a different kind of audience than found in the usual Rock concert. This audience consisted of neat people, not hippies with unwashed hair and torn jeans. Indeed not one such could be seen in this huge audience that truly reflects America.
Plus not one beer can was seen, there was no dope being used. The audience was orderly and had a great time.
The tickets start from $140.00 with no doubt stiffer prices near the stage. Actually, you pay that much to see a Broadway show these days with nothing near the quality as this Country Boy in The Stadium.
His final song was, “The Dance.” The audience went respectfully wild and gave him a long standing ovation while he trotted out on every runway from the stage to acknowledge everyone everywhere in that stadium.
Again, this is what entertainment should be. Be sure and try to see his concert when he comes to your area. Musicians, entertainers, movie stars–
TAKE NOTE!
ANALYZING TODAY’S NEWS FOR TOMORROW’S HISTORY