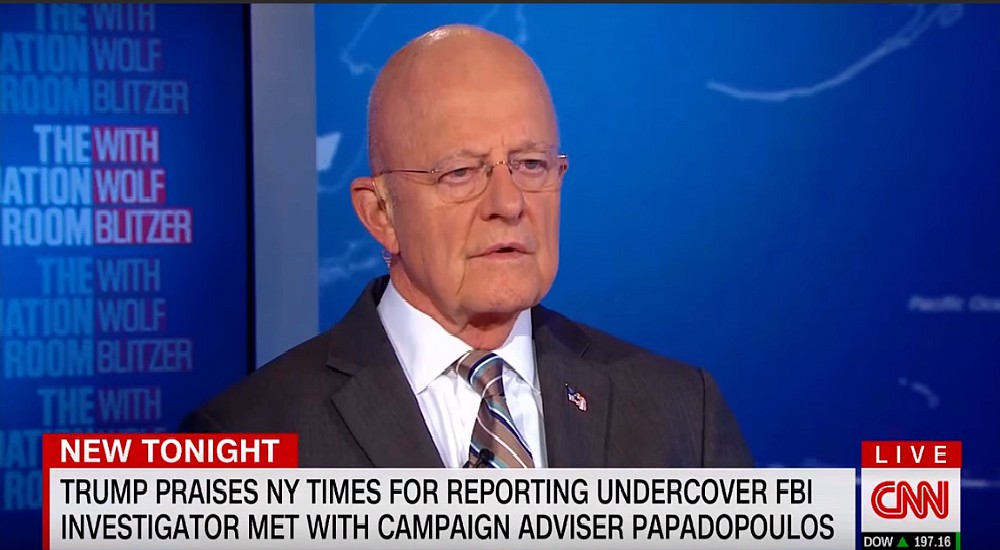 He was speaking with Wolf Blitzer when he begrudgingly admitted that yes, technically speaking, the DOJ did spy on Donald Trump’s campaign. He then added that he didn’t like to use that term.

Wolf Blitzer: The president praised “The New York Times” for a front page story that there was an undercover FBI investigator who met with a Trump campaign official, George Papadopoulos. The president views this as spying. The attorney general says this is being looked at. Do you think the Justice Department inspector general will find anything inappropriate on the part of the FBI or the U.S. intelligence community as far as this is concerned?

James Clapper: Well, I don’t know. but I will say that using undercover agents is a standard and legitimate technique that is widely used in investigations. That technique has been used to thwart a lot of counterterrorism plots in this country. So I’m sure — I mean, there are protocols and standards for using an agent and I’m sure that’s the case here.

Wolf Blitzer: So you’re saying this was not done lightly?

James Clapper: No. It is never done lightly.

Wolf Blitzer: Was it spying?

James Clapper: Well, yeah, I guess it meets the dictionary definition of surveillance or spying, a term I don’t particularly like. It’s not a term of art used by intelligence people. It has a negative connotation of a rogue operation, out of control, not in compliance with the law, and that’s not the case at all.

I’m not sure what other evidence is needed for the delusional media and their Democrat friends?

The DNI, the guy who leads all of our intelligence efforts just admitted that his people did spy on the President.

Whether the actions were legitimately taken or not isn’t the question. They did it. Now we can discuss the legitimacy of undertaking such an operation with the “Steele Dossier” as the premise for doing so. A dossier that was bought and paid for by the opposing campaign/political party, and was filled with vile lies and inflammatory ridiculousness.

How the DOJ can argue that premising an investigation on the oppo research of a corrupt Democrat team is “legitimate” is beyond me.