I Am Now In Hillary’s “Basket Of Deplorables” 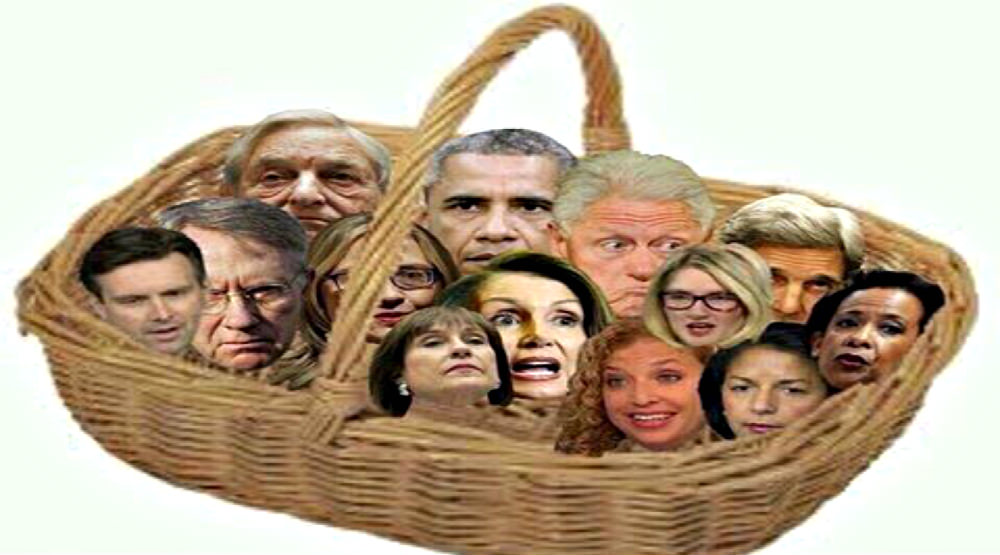 So I took some time off from blogifying and opinionating on what’s going on in the world to take my annual fishing pilgrimage in the great state of Kentucky.  I join with a few retired military friends of mine to hunt the elusive catfish, quaff a few brewskis and do some real man bonding.  On Sunday, the fifteenth anniversary of 9/11, we stood on the shore of the lake and at 9:37AM put our hands over our hearts, looked to the northeast, and said a silent prayer.

I got back late Sunday night and while perusing the news stories of the week, got a total shock.  I read the Hillary Clinton, at a fundraiser, said that “half of the supporters for her rival Donald Trump are a “basket of deplorables.””.  According to Saint Hillary, those 20-30 million voters in the basket are racist, sexist, homophobic, xenophobic, and Islamophobic, among other things.

Now, up to this point I am been torn on who to vote for.  The only sure thing I know is that it is NeverHillary.  I wasn’t too sure about Trump, heck I was even a Never Trumper, but now the bitch done pissed me off.  I am now planning on voting for Trump just to aggravate Hillary.  So now I am in the Hillary’s basket of deplorables.  Having said that I wanted to take a look at how I stand against Hillary’s criteria.

Hang me for being sexist because I do not believe that of all the creatures on this planet, only the female of the species Homo sapiens has the right to kill an unborn child in her womb.  We have sugar coated this one by calling it “woman’s reproductive rights” and other flowery terms but it is what it is.  I sit in horror and watch as the world goes insane with so called misogynist hate crimes and “death to the patriarchy”.  Having done research I know that women have more government programs than men and, with affirmative action, which is government based discrimination, have more educational and job opportunities than men.  The feminazis have done a great job in dumbing down our sons and destroying marriage even though research has shown that children do better in a home with a father and mother.

I guess I must be homophobic because I see that, while a majority of gays just want to live their lives as they want in peace, they are being represented by a militant LGBT movement that is hell bent on destroying every tradition in this country.  This includes marriage and religious beliefs, especially Christian.  Unfortunately, our government, the best anyone can buy, is more than willing to support their efforts.  The 1st Amendment right of the Christian religion that is suppose to be protected by Congress has been destroyed in support of political correctness and votes.

I am not against immigration, in fact I wholly support it.  If it wasn’t for immigration I would still be living in England watching my country disintegrate into a 3rd world Muslim caliphate.  I just have a problem with illegal immigration.  I don’t think that if you break the law to get into my country we should just forgive and forget and give you a bunch of taxpayer funded freebies.  I am certain that the 800,000+ men and women currently sitting in prisons in this country would love the same courtesies we show illegal immigrants.  I believe that if you are in my country illegally, you and anyone else you came with, needs to be caught and thrown back across the border.  And, above all, end sanctuary cities. Kate Steinle would have appreciated it.

Okay, you got me on this one or maybe not.  I think I am more Islamosmart than Islamophobic.  I am not blind, I can see what is happening all over the world.  Islam has always said that it is their destiny to rule the world and that is what they are working for.  Look at a Europe that is being overrun by the Muslim horde and then close your eyes and imagine the same thing happening in America.  Islam has declared war on the West and we just sit by idly, opening the doors to let it happen.  Thank you libtards for destroying us all.  I can’t wait to see how libtards react when the new Muslim caliphate in the US starts hanging and throwing gays off buildings and insisting that feminazis dress up in burkas.

So there it is.  Today I officially announce my support for Donald Trump for President.  Not that I think he will be a great President, mind you.  I joyfully jump into Hilldog’s basket of deplorables for the reasons I list above.  I can relax now and plan my turkey hunting trip for November.  The one I take every year just to piss PETA off.

I guess it can be truly said that the “enemy of my enemy is my friend”.