We are a Nation of Citizens, Not Immigrants 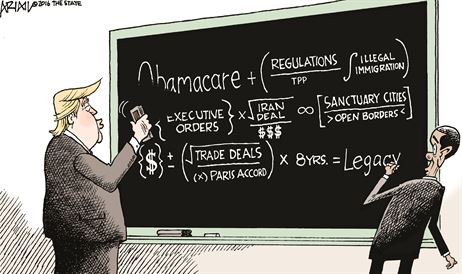 Obama’s legacy has been to weaken America economically and military while empowering the Islamic Jihad that would enslave the world under Sharia.  Donald Trump represents America that will not allow his anti-American legacy to survive.

America is not a nation of immigrants, but a nation of citizens with laws.  We were born here, our fathers were born here, and their fathers before them.  That makes us citizens of this land.  The dysfunctional thinking of the left is what leads to their misunderstanding of history.  When Europeans first came here the natives didn’t have a country, just a tiny population of nomadic Stone Age tribes and open land.  ALL inhabitants of this continent have in their past ancestors who came here from other parts of the world including those who are said to be indigenous peoples!  Native Americans migrated here in prehistoric times, so why does no one on the Left call them illegal immigrants?

The Indian Wars were waged because the natives didn’t recognize the rights of anyone outside of their tribes and believed it was right to steal, rape, and murder their neighbors.  Some natives were peaceful and traded with colonists, but frictions between the two sides always resulted because both sides had bad people who spoiled the relationship.  But most natives did not die from wars, they died from diseases that their bodies were ill-equipped to battle.  Condemning colonists because disease wiped out 90% of the Indians is as wrong as blaming the Chinese for wiping out 75% of Europe in the 14th century.  It was not genocide by biological warfare, it was life and what happens every time cultures from different parts of the world mix.

Nations today have established their borders, but those borders are still changing.  When the Soviet Union broke up the Ukrainians declared their independence because they never wanted to be part of the country whose leader sent soldiers to steal their food and starve millions of them to death.  In America there are Mexicans still fighting for Santa Ana that want the southwestern states to be reincorporated into Mexico.  While they are welcome to California, the rich state in which Democrats are bankrupting their people and requires federal aid taking money from Texas to keep it afloat, despite the stupidity of its governor its people have no desire to become part of Mexico that would rape them mercilessly.  Mexican corruption is the reason Mexicans sneak across our borders to get good paying jobs, but they don’t want to pay American taxes which provide for our citizens.  America is a nation of citizens and those who violate our laws are not welcome here.  Whether they come here sneaking across the border illegally or come here legally with visas and overstay they are still breaking our laws.

Those who come to America with the intention of subverting it rather than becoming Americans have no place in this country because they are enemies of Americans.  The 9-11 hijackers and Islamic terrorists all came to America legally.  The wall Trump needs to build is not a bunch of bricks like we’re in the ancient world.  This is the 21st century where a virtual wall of sensors, drones, patrols, and gunships should protect our borders.  Then the immigration system needs to enforce visas term limits and qualifications for applicants before allowing them into this country.  The immigration system is not broken – the Democrats who have been running the system are!  Allowing anti-Americans to come into this country to subvert it is not American!  Those who are driven by their belief they have a right and requirement to impose Sharia on others peoples have no place in America and should be sent packing off back to their homelands.

Liberal ideology fails mostly because they don’t understand history due to their dysfunctional thinking.  They apply today’s concepts of morality and culture in America to antiquity and the world without understanding how myopic is their vision.  They don’t understand that the world today is different from the world of the past only in its technology and laws.  They don’t understand that people in other countries do not think the same way as Americans.  They think on the one hand that history is obsolete and outdated, and on the other want to use history to declare what the world should be.  People are the same today as they were in biblical times.  People are still either; good or bad, greedy or giving, considerate of others or inconsiderate, and liberals do not understand that.  They apply their personal, misguided morality to others and to the past while at the same time they are corrupting morality with their own warped ethics.

No nation survives without firmly established borders and laws within those borders.  We guard our borders for the same reason we lock the doors on our house, not because we hate the people on the outside, but because we love those on the inside.  People in other countries neither respect our laws nor live by them.  Islamic jihadi’s laws are Sharia which calls on them to war and conquer and enslave non-Moslems and can never mix with America and the Constitution.  They do not come to America to become Americans, but to colonize and subvert America, and they are not welcome here.

Liberals who welcome them have already surrendered and it is only a matter of time before they submit to Allah as they submit to their basest desires for tyranny.  They think they see kindred spirits who will fight alongside them against the Christians they despise.  But like the Nazis and Communists in WWII banding together to attack free capitalist nations, eventually they will be at each other’s throats, and it will only be through strength that America can come out on top once again.  History has proven that all wars are started by the Left, but only some are won by the Right.  It is the right of America to be sovereign and not be part of the world.  The world is dark and perverted while America has risen above the rest.  Liberals want to make America the world, but the righteous want to elevate the world and make it America.  But that cannot happen so long as the hate and slavery of other ideologies is not only allowed, but encouraged to proliferate.

NYC De Blasio promises Moslems he will fight Trump for them