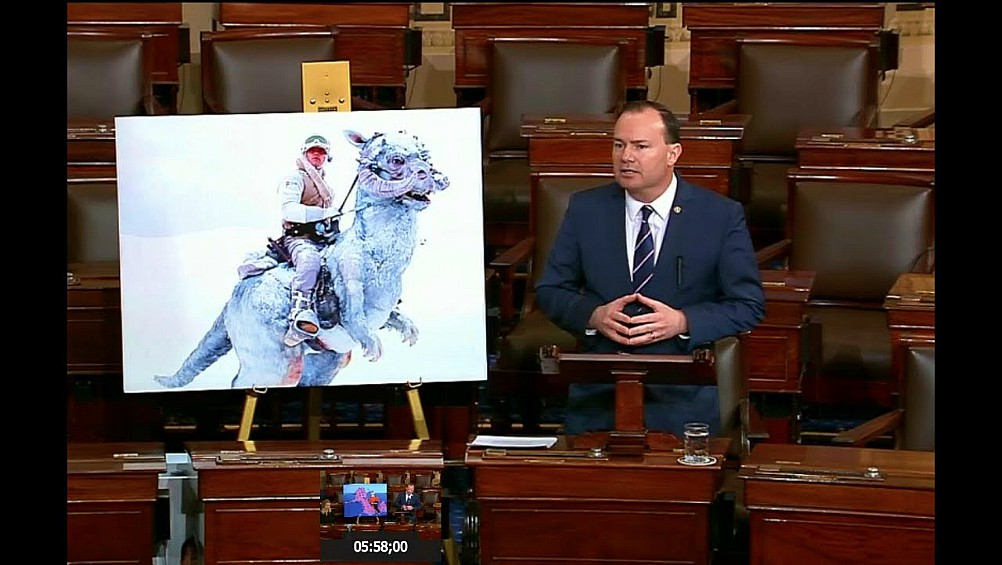 Senator Mike Lee (R-UT) may well be the most intelligent man in the legislature. (He, Senator’s Ben Sasse (R-NE) and Ted Cruz (R-TX) are all brilliant.) However, earlier this week Lee was forced to debase himself and deal with one of the most foolish ideas ever put forth in Congress… “the Green New Deal.”

Thankfully, Lee chose to interact with the Green New Deal on its own terms.

Watch this then share it as wide as possible.

Fear has become an all-too-prevalent quality in America’s political discourse.

And unfortunately, fear is unavoidable when debating the substance of the resolution before us today – climate change, socialism, and the Green New Deal.

On entering this debate, I have a little fear in my heart, too.

But, Mr. President, my fear at this moment may be a little different from that of my colleagues.

Unlike some of my colleagues, I am not immediately afraid of what carbon emissions, unaddressed, might do our environment, our civilization, and our planet.

Unlike others, I am not immediately afraid of what the Green New Deal would do to our economy and our government. After all, it’s not going to pass today.

Rather, after reading the Green New Deal, I am mostly afraid of not being able to get through this speech with a straight face.

For Mr. President, I rise today to consider the Green New Deal with the level of seriousness it deserves.

This is a picture of former President Ronald Reagan firing a machine gun while riding on the back of a dinosaur.

You will note both the rocket launcher strapped to his back, and the stirring patriotism of the velociraptor holding up the tattered American flag.

Now, critics might quibble with this depiction of the climactic battle of the Cold War, because – while awesome – in real life there was no climactic battle, with or without velociraptors.

The Cold War was won without firing a shot.

The aspirations of the proposal have been called radical and extreme. But mostly they are ridiculous.

There isn’t a single serious idea here. To illustrate, let me highlight two of the most prominent goals produced by the plan’s authors.

Goal Number One: the Green New Deal calls for the elimination of all airplanes.

This might seem merely ambitious for politicians who represent the densely populated northeast. But how is this supposed to work for our fellow citizens who don’t live between Washington and Boston?

In a future without air travel, how are people supposed to get around the vast expanses of, say, Alaska during the winter?

I’ll tell you how.

Tauntauns, Mr. President: a beloved species of repto-mammals native to the ice planet of Hoth.

While not as efficient as planes or snow-mobiles, these hairy, bipedal space lizards offer their own unique benefits.

Not only are tauntauns carbon-neutral, but according to one report “a long time ago” and “far, far away,” they may even be fully recyclable for their warmth on especially cold nights.

What about Hawaii, isolated, 2,000 miles out into the Pacific Ocean? Under the Green New Deal’s airplane prohibition, how are they supposed to get to and from the mainland, or maintain their tourism-based economy?

At that distance, swimming would be out of the question. And jet skis are notorious gas-guzzlers. No, all residents of Hawaii would be left with… is this.

This is a picture Aquaman, a super hero from the underwater kingdom of Atlantis and founding member of the Super Friends.

I draw your attention, Mr. President, to the twenty-foot sea horse he is riding. Under the Green New Deal, this is probably Hawaii’s best bet.

Now, I’m the first to admit that a massive fleet of giant, trained seahorses would be very cool. But we have no idea about scalability or domestic capacity in this sector.

The last thing we want is to ban all airplanes, and only then find out that China or Russia have already established strategic hippocampus programs designed to cut the United States out of the global market.

Mr. President, we must not allow a giant seahorse gap!

Goal Number Two: the Green New Deal anticipates the elimination of all cows.

Talking points released by the sponsors of the resolution the day it was introduced cited the goal of “fully get[ting] rid of” – I will paraphrase – “[flatulating] cows.’”

Now, Mr. President, I share their concern. But honestly, if they think the cows smell bad, just wait ‘til they get a whiff of the seahorses.

But back to the cattle. I have a chart to illustrate the trend.

As you see, Mr. President, on the left these little cows represent the population of bovine Americans today.

On the right is the future population under the Green New Deal. We would go from about 94 million cows to… zero cows.

You may think I’m exaggerating, Mr. President, but this is no bull.

No more milk. No more cheese. No more steak. No more hamburgers.

Over the state work period last week, I visited some farms to find out for myself what Utah’s own bovine community thinks of the Green New Deal.

Every cow I talked to said the same thing: “Boooooooo.”

The authors of this proposal will protest that these goals are not actually part of the Green New Deal, but were merely included in supporting documents – accidentally – sent out by the office of the lead House sponsor.

But, Mr. President, this only makes my point.

The supporters of the Green New Deal want Americans to trust them to reorganize our entire society and economy … when they couldn’t even figure out how to send out the right press release.

This resolution is not an agenda of solutions. It’s a token of elite tribal identity – and endorsing it, a public act of piety for the chic and woke.

And on those embarrassing terms, it is already a resounding success.

As Speaker Pelosi herself put it: “The green dream, or whatever they call it, nobody knows what it is, but they’re for it right?”

Critics will no doubt chastise me for not taking climate change seriously. But please, Mr. President. Nothing could be further from the truth.

No Utahn needs to hear pious lectures about the gravity of climate change from politicians from other states.

For it was only 2016 – as viewers of the SyFy Network will remember – when climate change hit home in Utah, when our state was struck not simply by a tornado, Mr. President, but a tornado … with sharks in it!

These images are from the indispensable documentary film, Sharknado 4.

They capture the moment when one of the tornado sharks crashed through the office window of Utah’s Governor, Gary Herbert.

A true Utah hero, Herbert bravely fought the animal off with the tennis racket he keeps by his desk … for just such occasions.

So let’s be really clear, Mr. President. Climate change is no joke. But the Green New Deal is a joke.

It is the legislative equivalent of Austin Powers’s “Dr. Evil” demanding “sharks with frickin’ lasers on their heads.”

The solution to climate change won’t be found in political posturing or virtue signaling like this.

It won’t be found in the federal government at all.

You know where the solution can be found? In churches, wedding chapels, and maternity wards across the country and around the world.

This, Mr. President, is the real solution to climate change: babies.

Climate change is an engineering problem – not social engineering, but the real kind.
It’s a challenge of creativity, ingenuity, and technological invention.

And problems of human imagination are not solved by more laws, but by more humans!

American babies, in particular, are likely going to be wealthier, better educated, and more conservation-minded than children raised in still-industrializing regions.

As economist Tyler Cowen recently wrote on this very point, “by having more children, you are making your nation more populous – thus boosting its capacity to solve [climate change].”

Finally, Mr. President, children are a mark of the kind of personal, communal, and societal optimism that is the true pre-requisite for meeting national and global challenges together.

The true heroes of this story aren’t politicians or social media activists.

They are moms and dads, and the little boys and girls they are, at this moment, putting down for naps… helping with their homework… building tree houses… and teaching how to tie their shoes.

The planet does not need us to “think globally, and act locally” so much as it needs us to think family, and act personally.

The solution to climate change is not this unserious resolution, but the serious business of human flourishing – the solution to so many of our problems, at all times and in all places: fall in love, get married, and have some kids.

I yield the floor.