Why Does it Matter How We “Name” the Enemy?

As you all probably know, there is a serious argument taking place over whether or not our president and his administration should “name” our enemy. As he has wont to do, President Obama attempted to both school and to chastise conservatives, Republicans, and in particular Donald Trump for the demand that he and his administration correctly identify and name the enemy that has so far launched numerous deadly attacks against our nation, culture, and people.

What the president knows and refuses to acknowledge is that there is a tremendous and significant gap between the religion of Islam and Radical Islamism. Islam in its broadest sense is unlike today’s Christianity. So a little history is necessary:

Christianity is almost purely religious in nature today and generally contains itself to the worship of the Christian God and the acceptance of Christian morality as defined by the Bible, both old and New Testaments. Christianity today makes little attempt to portray itself or to act as a form of governance and law.

What some may not know is that both Christianity and Islam are founded on the tenets of Abraham as described in the Old Testament of the Bible. Both are considered to be Abrahamic religions as is Judaism.

Judaism grew from and evolved from the original Abahamic teachings. Judaism predated both Christianity and Islam, and like Islam originated as both religion and governance. God gave down law to man and it was man’s duty to abide by that law. Subsequently however, Christianity was founded on the teachings of Jesus Christ that were themselves evolved from Judaism. Christ made a clear distinction between the “laws of man” and the path to Godly salvation based on his sacrifice on the Cross and his resurrection.

Islam post-dates Christ and Christianity. While Islam does not recognize Jesus Christ as does Christianity, as our savior, Islam recognizes the life and prophesy of Christ. However, Islam was not an evolution from Abrahamic law; Islam was a revolution from Abrahamic teaching based upon the conversations Mohammad the prophet says he had with Allah (God) that were captured in the Quran and the Haddiths. The most important point here is that while Judaism and Christianity evolved into pure religions, probably because of the imposition of Roman Law, Islam remained both religion, governance, and law. 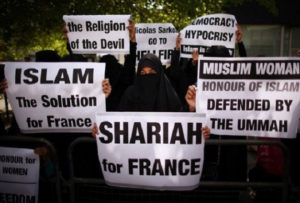 Many modern Muslims have “Westernized,” and their beliefs have evolved to one extent or another. Today, there are about 1.4 Billion Muslims in the world. Of these there are several major and several minor sects of Islam, each based on a historical schism. About 85 percent of these Muslims treat Islam as primarily a religion and support secular (non-religious) governance and law. Unfortunately, about 15 percent or 210 million Muslims follow not only the religious aspects of Islam, but believe that Islam also must be the basis of governance and law. We refer to these people as Islamists.

Islamists believe that they have been commanded by Allah (God) to convert everyone in the world to Islam and to subjugate those who refuse to convert. In essence these people believe it is their duty to Allah to conquer the world by whatever means necessary.

Several historical paths to conquest have been defined for Islamists in the Quran, the Haddiths, and in subsequent Islamic teachings. The may conquer by force and violence; But, they also may conquer through immigration and reproduction until they reach a critical mass of about 15 percent of a population at which time they typically can take over and impose Islamic governance and “Shari’a law.”

Polls have clearly shown that many Muslims living in the US and Europe support the imposition of Shari’a law to some extent. That makes them Islamists as well as Muslims. However it is those who support the spread of Islam by any means including through violence we must be most concerned with. These are what I and many others refer to as “Radical Islamist Terrorists. ISIS/ISIL is a radical Islamist Terrorist organization, as is Al Quaeda, Al Nusra, and many other organizations that have openly and publicly declared that they are at war with the US, with Western culture, all forms of democratic government (governance), and with any and all forms of law other than Shari’a.

So to conclude, the reason that it is crucial for our president, his administration, and our media to apply the correct identification of our self-declared enemy is to make the clear distinction between Muslims with whom we should show tolerance and acceptance and Radical Islamist Terrorists who have dedicated themselves and their lives to the conquest of our nation and our way of life.