A Look Behind Trump Surging Polls

The University of Southern California (USC) Dornsife/LA Times Presidential Election “Daybreak” Poll uses a methodology that is, if not the best, certainly one of the very best. In past years, a virtually identical methodology was used by the RAND Corporation for its daily presidential tracking poll (RAND no longer polls presidential preference). Each day’s poll number is an average of the prior seven days of raw polling, typically based on about 3000 responses. This method not only smooths day-to-day variations, it also provides a more stable estimate of voter sentiment. It is certainly a far better indicator than an average of a collection of poorly-conceived polls who routinely oversample certain demographics in order to produce a desired result (e.g., The Washington Post poll that is notorious for oversampling Democrats and the FOX News poll that, according to its own methodology statement, oversamples women 53% to 47% and ignores political party affiliation). Averaging a collection of poor polls will always produce a poor result.

The dramatic across-the-board surge for Donald Trump over the past 10 days indicates it unlikely Trump’s surge momentum will diminish in the final days before the election. Barring massive partisan vote fraud favoring Hillary Clinton, there is now more than 95% confidence Donald Trump will achieve a stunning and dramatic election day victory.

The evidence for unstoppable Trump momentum is found in both his overall performance and in every demographic category of the USC Dornsife/LA Times poll:

The above snapshot of the November 4 USC/LA Times poll shows the complete history starting July 10, 2016.

Key demographic information as of November 4 is shown in the following chart that looks at changes in each candidate’s support over the past 10 days in their strongest demographic in each of the five demographic categories: 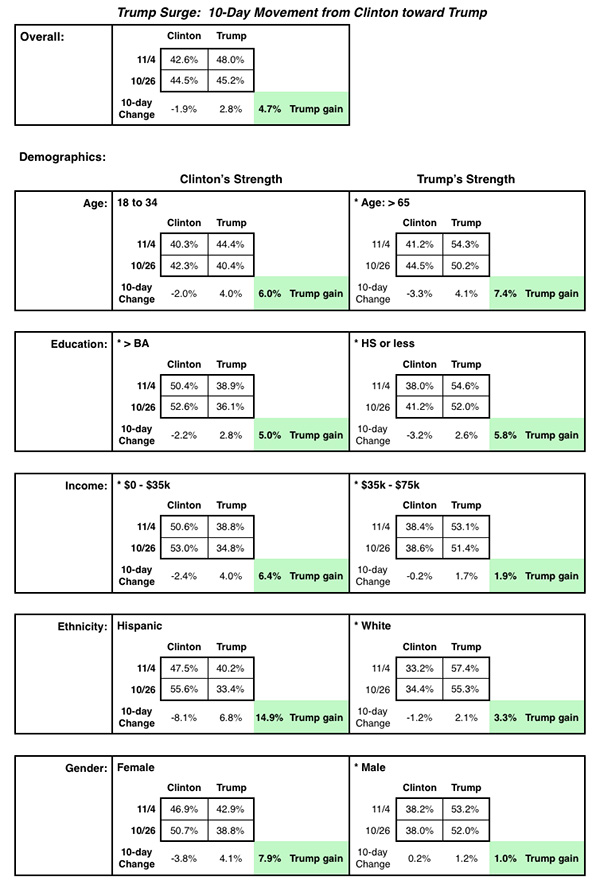 While Trump’s support surged to its all-time high of 48% in the poll, Clinton’s support sagged to 42.6% under the weight of corruption scandals that encompass Clinton, her aides and associates, the Departments of Justice and State, and President Obama.

Even worse for the Clinton campaign, poll demographics reinforce the strength and breadth of Trump’s surge momentum.

While Clinton is ahead in five of the 15 demographic categories, Trump is leading in 10. In six of the 10 categories in which Trump leads, his lead comes with more than 95% confidence. Clinton’s lead is above the 95% confidence threshold in just three categories: Low income ($0 to $35k), Education (BA+), and Ethnicity (Americans of African descent).

Further testimony to the momentum of the Trump surge: over the past 10 days, Trump has gained on Clinton in every demographic category.

Trump has made significant gains, particularly among women and Hispanics in Clinton’s strongest categories of demographic support, female gender and Hispanic ethnicity.

While Trump maintains a strong double-digit advantage among men, Clinton’s lead among women has dramatically sagged to a mere 4%.

Election demographic experts have predicted Trump need only achieve 30% to 35% of the Hispanic vote to be virtually assured of victory. Trump is now polling 40.2% among Hispanics, just 7.3% below fading Clinton’s 47.5%.

Not only has Trump gained 6% over the past 10 days among Millenials, he is now leading Clinton by 4.1% in an age bracket that had been her strongest.

The magnitude of the recent Trump surge is shown graphically below by the 10-day weighted poll average for each candidate. The 10-day average is weighted most heavily for the most recent of the 10 days (day 1 is weighted “1”, day 2 is weighted “2”,… day 10 is weighted “10” and the result normalized by dividing by the sum of the weights). This weighting scheme places greatest importance on most recent polling while revealing polling trends over the past 10 days.

Note the dashed trend lline (5-th degree polynomial fit) that illustrates the direction and momentum of each candidate’s poll movement. Trump’s momentum is sharply up; Clinton’s is sharply down.

Given Trump’s strong poll momentum, it is entirely possible that by election day Trump’s support will reach 50% while Clinton’s support further hemorrhages below 42%.

The Trump closing surge in this key nationwide poll coupled with daily evidence of Trump surpassing Clinton in state after state across the country builds a foundation upon which an electoral and popular vote landslide for Donald Trump can be predicted.

Meanwhile, the Clinton campaign is in full disarray, reduced to shrill mudslinging in every direction.

Some elements of the biased news media are beginning to discuss Clinton’s “pay to play” scandal and her email national security breaches as startling revelations emerge from both WikiLeaks documents and the FBI investigations into both Clinton’s unauthorized use of nonsecure email servers and devices and her selling of federal law exemptions to foreign entities in exchange for massive cash donations to the Clinton Foundation during her tenure as Secretary of State.

Evidently, Clinton’s use of celebrities and President Obama to try to swell rally attendance isn’t working any better for her than the scandals that just keep getting worse with each day.

The only chance Clinton has of achieving the necessary electoral votes to become President is through massive vote fraud in key battleground states. As momentum against Clinton builds in the form of support for the Trump movement, we may be fortunate to see sufficiently massive repudiation of Clinton’s dishonesty and corruption that vote fraud will be insufficient to nullify legitimate votes.

It behooves every “battleground” state’s attorney general to issue a public statement prior to Tuesday’s election warning those who may be tempted to commit vote fraud that any indication of fraud will be thoroughly investigated prior to final vote certification and, where vote fraud is suspected and found, those responsible will be prosecuted to the fullest extent of the law.

This nation is long overdue to get serious about vote fraud by adopting election procedures that will assure voters their vote will not be compromised by corrupt partisans who’ve routinely been committing vote fraud that is getting more brazen and widespread with each election cycle.