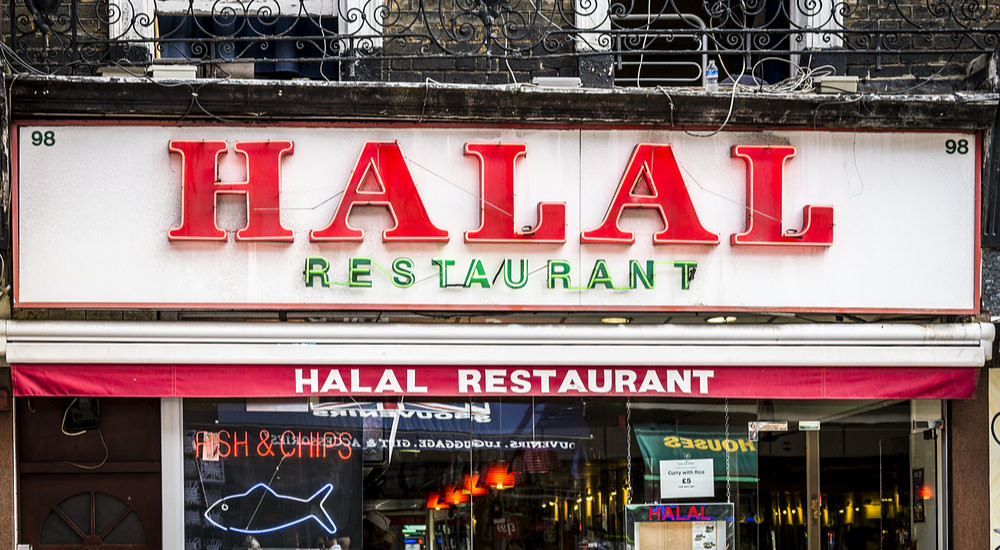 North America’s grocery stores and delicatessans have been quietly invaded! Too often displayed in preferred spots for maximum hype and marketing, Halal foods as dictated by Sharia Law rest boldly in display cases!

WalMart grocery stores are perhaps the worst offenders. No sooner do customers walk inside the entrance, when Halal foods in display cases are the first things they see! Marked Halal, rows and rows of chickens await WalMart patrons!

Vigileaks walked up to the counter above these Halal chickens and queried, “What does Halal mean?” “Oh,” was the reply, nervously spoken in poor English as a second language, “It’s nothing. It’s nothing. How many would you like?”

What is usually not told the customer is the full definition of Halal.

Halal is an Arabic word that means “permissible.” In terms of food, it means food that is permissible according to Islamic law. For a meat to be certified “halal,” it cannot be a forbidden cut (such as meat from hindquarters) or animal (such as pork.)  America’s pork farmers and related industries are terrorist targets.

The slaughter of a halal animal is called “zabihah” and there are certain guidelines to follow: The first of these guidelines is that Allah’s name must be pronounced during slaughter. In shocking truth, as revealed through authoritative research, Allah is Satan.  Even former Muslims admit this!

So now Americans are confronted at the meat sellers with meat offered to Satan. Literally! For duped liberals who are not Christians or Jews, this means little to nothing. But for those who know Lucifer exists – the same Lucifer of Lucifer Trust which became Lucis Trust in the UN – this is a heinous imposition and injustice.

As extensive as these WalMart grocery sales are daily, these constitute only a fragment of Halal sales. Other grocery store chains are, wittingly or unwittingly, getting aboard the Sharia food bandwagon, as are locally Muslim-owned fast-food chains. This is a silent invasion and subjugation of American culture.

One WalMart customer expressed a Just War sentiment for countering these aggressive sales, of imposed Halal meats first offered to Satan and then customers: “Americans don’t want this. We must routinely put pork into their Halal sections – forcing them to clear it all out! American patriots and Constitutionalists will not eat Halal meats! Meat dedicated to Satan is infinitely worse than meat offered to idols!”

The Moral:  Think twice before you put halal meat, offered to Satan, on your credit card at 19% interest…  Tell store owners you will only shop where non-halal meats are sold.  Boycott Halal!  Conquer or be conquered…