KKK endorses Trump AND Hillary for their ‘Values’ 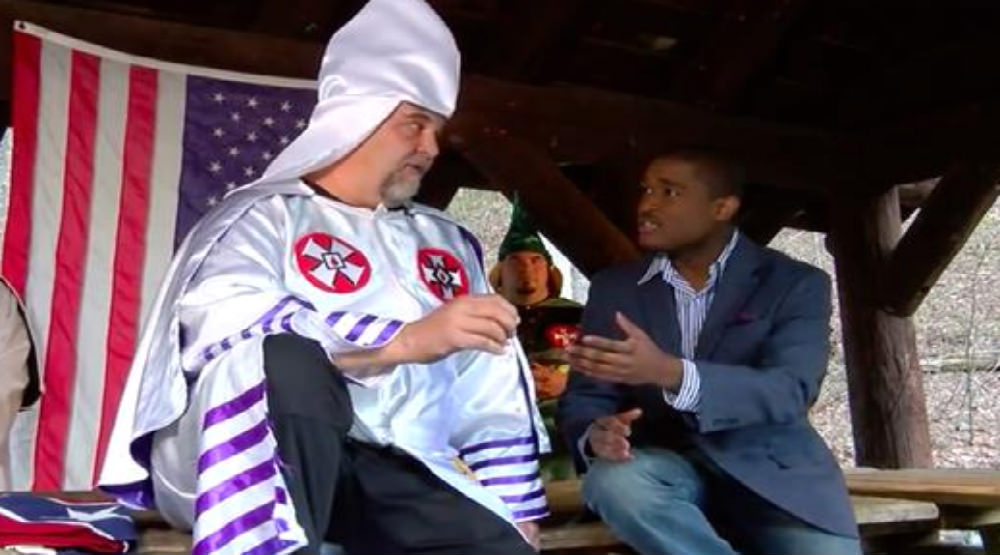 So what gives?  Hillary is trying to make a big deal over KKK leaders endorsing Donald Trump because “he represents their values,” but other KKK leaders are with her because “she represents their values.”  So what are the values of the KKK?  The interviewing reporters didn’t bother to ask what those values are and neither candidate has said they want to lynch n*ggers, but that doesn’t stop Hillary from implying that’s what Trump’s Republicans want to do or that police are the new white supremacist lynch mobs.

Racism in the 2016 presidential campaign is the central platform of both campaigns.  Hillary promises to continue the Obama Doctrine of importing more Mexicans and Moslems to take jobs and convert the nation while keeping blacks dependent on the Democrat Party.  Trump wants the Democrat’s importing of cheap labor and America’s enemies stopped, which Hillary calls racism.  Last anyone checked neither Mexicans nor Moslems were a race, nor are they Americans.

Trump and Clinton smear each other as bigots

Trump responded by appealing to blacks whose families and culture have been destroyed by Democrats over the last eighty years.  From FDR’s Raw Deal that began the dissolution of the black family, sparking Martin Luther King’s “peace revolt” because single mother births in the black community had tripled from 8% to 25%, to LBJ’s New Society wherein blacks keep their population down through abortion, drugs, crime, and another tripling of single mother births up to 75%, the black community in America has become the drugged up welfare voter slaves of criminals living on the Democrat Plantation.  Because Democrats have taken control of our education system over the last 50 years they teach blacks that Republicans have taken the place of racist Democrats, and that it is right for them to riot and steal from the rich.

America’s current economic plight is blamed on Republicans by Democrats who say it is capitalism, corporate greed, lack of taxation on the rich, and exporting jobs for cheap labor that Hillary says Democrats will solve through higher taxes and socialism, i.e. stealing from the rich and giving to the poor.  But most of that money never ends up in the hands of the poor, but in the hands of Hillary’s cronies on Wall Street, and her foreign friends who purchase her favor through her foundation.  Democrats are content with their representatives stealing from the rich without consideration of the consequences.  As Democrat taxes drive Republican companies and the wealthy out of America they import cheap labor for their own friend’s companies for whom they create tax loopholes.

Donald Trump was never called a racist in thirty years in the public eye until he began his campaign against Democrats.  Democrats say Martin Luther King, Jr. was a Democrat, but his family and history proves that to be a lie.  So what are the values of the factions of the KKK by which they support their candidate?