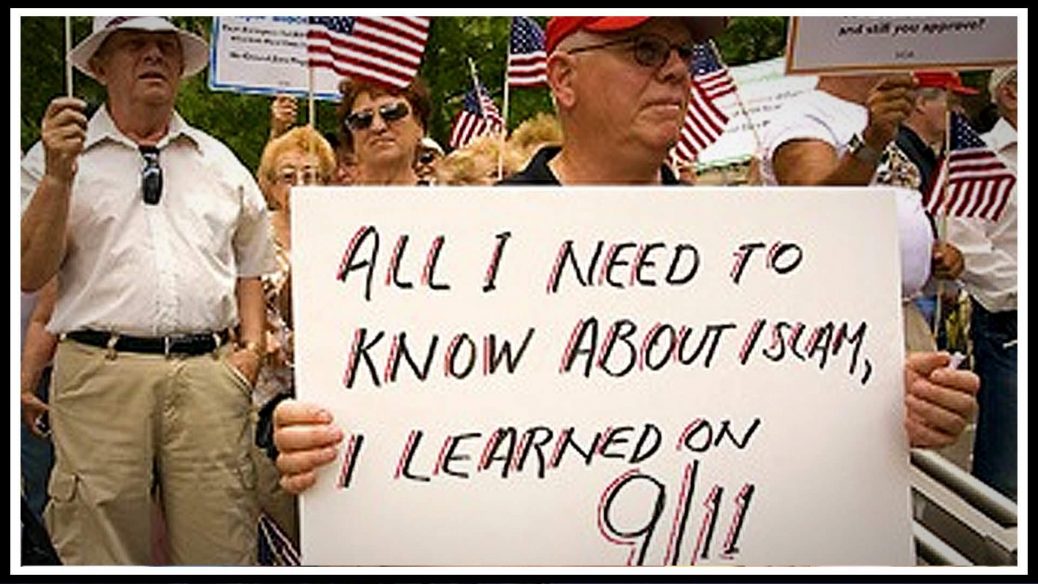 I have just finished reading an article at the Clarion Project titled Islamophobia – Paranoia or Reality? which was penned by Tahir Gora, the director of the Canadian Thinkers’ Forum and member of the Coalition of Progressive Muslim Canadian Organizations. The article ends with:

Similarly, acts ranging from my Muslim community’s general conspiracy theories to men and women being segregated to adherence to sharia values would not make our neighbors and fellow Canadians comfortable about us. There are hundreds of reasons how my Muslim community could create resentments in my fellow citizens towards Muslims. The Muslim MPs, who are advocating more for their Muslim communities than their own country, should not appear as hypocrites by asking Canadians to change their mindset while not asking their own communities to leave certain hateful practices behind.

It was an interesting article to read. Also interesting was the one minute video of Clarion Project advisor Raheel Raza briefly commenting on the now brighter future that Progressive Liberal Democracy loving Muslims have under Donald Trump; a future not led by Islamists.

The Liberal Progressives have done their best over the years to guilt trip western societies but when you read the article listed above and see Raheel Raza’s video, you can’t help but note that the guilt foisted onto society by the left is ‘false guilt.’

Two years ago on my own website I published an article relating to the Islamic Human Rights Commission 2014 Islamophobia awards. I took exception to some of the comments in their press release and today I would like to draw that article to your attention by providing some edited commentary contained within it.

This week at Magic City Morning Star (Thursday 13, 2014) I published an article sent in by the Islamic Human Rights Commission in relation to this year’s IHRC Islamophobia awards, an annual recognition of the disservice done to Muslims and their faith by public figures. (Anyone know anything about Bethlehem?) The article states that:

Although the awards are intended to be a tongue in cheek poke at public figures of all stripes, they do carry a serious message. Islamophobia is on the rise all over the world, particularly in the West, and the event serves to focus attention on the problem.

In the western democratic world we believe in free speech and the right to have and to hold one’s own religious, political and social beliefs and cultures. The article sent to me was therefore published, and if that group wishes to nominate public figures for ‘Islamophobia Awards’ then so be it. But I take exception to the expression ‘Islamophobia.’

According to dictionary reference.com, a phobia is a persistent, irrational fear of a specific object, activity, or situation that leads to a compelling desire to avoid it. Its synonyms are ‘aversion and hatred.’ According to Wikipedia, the word phobia comes from the Greek word Phobos, meaning “fear” or “morbid fear” and when used in the context of clinical psychology, it refers to a type of anxiety disorder, usually defined as a persistent fear of an object or situation in which the sufferer commits to great lengths in avoiding, typically disproportional to the actual danger posed, often being recognized as irrational.

The Wikipedia list of phobias (2014) does not include ‘Islamophobia’ and the word itself does not appear in the Merriam-Webster Dictionary.

In the IHRC article it is recorded that Islamophobia can be described as:

stereotypes, bias or acts of hostility towards individual Muslims or followers of Islam in general. In addition to individual acts of intolerance and racial profiling, Islamophobia leads to viewing Muslims as a greater security threat on an institutional, systemic and societal level and perceiving their views to be intrinsically problematic, violent or unethical.

It seems to me that today the word ‘phobia’ is being used by too many people and ideologies as a synonym for simple ‘fear,’ and it is being used in an accusatory fashion.

I intensely HATE going to new places, doing new things, and meeting new people. Since however there is no irrational or other ‘fear’ involved, I could not be described as ‘Agoraphobic.’ I’m simply neurotic.

My daughter loves snakes but I hate the sods! I don’t care if they are tame, defanged, harmless, small or beautiful; I’ve had too many encounters with the critters to want to be anywhere near them. The same goes for sharks. My fear is not irrational. It is quite rational and frankly, I don’t see why in god’s name I should have to ‘prove’ that I am not phobic or better yet, beat my so-called phobia by going out of my way to encounter snakes and sharks.

Today if you say anything at all negative about homosexuals you are labeled ‘homophobic.’ Well maybe some people do have an irrational all controlling physical and emotional reaction to being near or around homosexuals. Most people however who are tagged ‘homophobic’ have no such reactions. They just have their personal preferences or ideological beliefs. That does not make them ‘phobic.’

And this is why I object to the term Islamophobic. The IHRC definition of Islamophobic is in my humble opinion, ideological B.S. Quote: “Islamophobia can be described as stereotypes,”

How many people reading this would describe Chinese people as being short, with black hair, black eyes and brown or yellow skin? How many people would you guess to be ‘Sinophobic’ simply because they would stereotype Chinese people that way? I have lived in China for thirteen years. I’ve met groups of extremely tall Chinese (veritable giants); groups of extremely small Chinese (veritable little people); Chinese with red hair and brown hair, naturally curly hair and even ‘wiry’ hair. As for eye color, there are the black eyed, the brown eyed, the green eyed, the hazel eyed and the ‘blue eyed.’ No – I didn’t make that last one up. Stereotyping is normal. It is not a phobia.

QUOTE: Islamophobia can be described as … bias

The last thing I ever imagined that I would end up doing in my life, was living in China. Why? It is full of Asians with Asian culture! I am not Asian! I don’t have any interest in Asian Culture. Does that make me ‘Asian’ phobic? I have never been to the United States of America and I don’t want to either. I have no desire to go experience American culture! I’m obviously ‘America-phobic’ or just plain racist and xenophobic.

The Wikipedia article on ‘Racism‘ it says that:

Personally, I would suggest that true racism is a ‘clinical phobia’ or ‘anxiety disorder.’ That term ‘anxiety disorder’ worries me a lot because it seems to me that western society is full of anxiety and angst and despair. It sure seems to me that many people simply cannot cope with hearing anything other than their own regurgitated ideology. Anything and anyone who does not fit my ‘ideology’ is something to be feared and destroyed. That’s scary!

QUOTE: Islamophobia can be described as … acts of hostility towards individual Muslims or followers of Islam in general.

By some people’s definition of Islamophobia, saying anything nasty about a Muslim should be a crime – even if it is true. (It has twice already been declared in a court of law that the ‘truth’ is no defense in a ‘hate speech’ trial.)

Many people who are called Islamophobic have never shown acts of hostility toward Muslims. But then again, how do you describe ‘hostility?’ (A good example of hostility may be found in the ‘counter-protest’ culture of those allegedly opposing racism in Australia.)

QUOTE: In addition to individual acts of intolerance and racial profiling…

My country is not a Muslim country. It is a western Judeo-Christian based country with certain traditions and cultures that derive from that. Is my desire to see that continue – intolerant?

Racial profiling: As an ex-cop I sure as hell would not want to be running around pulling up suspects of all ethnicities and genders based on a politically correct perception that to state a person’s gender, ethnicity or skin color amounts to racial profiling.

QUOTE: Islamophobia leads to viewing Muslims as a greater security threat on an institutional, systemic and societal level

QUOTE: and perceiving their views to be intrinsically problematic, violent or unethical.

How many times must we read about honor killings? (Dec 13 incident in Egypt) And how many verbal and physical threats have to be made and how many terrorist plots have to be uncovered before our politically

correct elitists understand that Islamophobia is not an irrational fear.

What is called ‘Islamophobia’ by Islam is a rational, reasoned awareness of what is going on in the world and in our countries. If the only representatives of Islam to be seen or heard in the media are the nutcases, fanatics, murderers and religious fundamentalists, is it our fault if we perceive Muslims and Islam in a way that is not correct for the majority of Muslims?

So my personal message to IHRC and the Muslim community at large is this: Cut your politically motivated politically correct B.S. and start taking a very public and loud stand for the things that Islam claims to believe in. Decry terrorism!

Let’s see and hear the ordinary Muslims stand up to protest against each and every terrorist organization.

My fear is that my own country has become so weak, gutless and godless that one day it will become an Islamic Republic. My fear is quite rational. Do I blame Muslims for this? No!

I blame Political Correctness Ideologues! People with heads so far up their ‘you know where’ that they have no understanding of what takes place in the real world.

I blame people who have taught our kids for years not to believe in God, but then bend over backwards to accommodate Islam.

I blame people who have taught our kids to have no respect for culture, tradition, authority, the flag or the country it represents but want us to honor Islam.

I blame people whose sole aim is to destroy western civilization for the sake of an ideology which has already proven several times around the world, that it doesn’t work — Communism!

If Islam ever takes over Australia, I want to be sitting in the front seat while all these good for nothing elitist ideologues cop a bullet!

Don’t talk to me about Islamophobia! Let me talk to you about ‘freespeechophobia’; the absolute meltdown that some people have when they hear someone say something that has not been approved of by the political censors.

Congratulations to Tahir Gora Raheel Raza for their contributions to societal harmony.