iPatriot is Freedom Of The Press 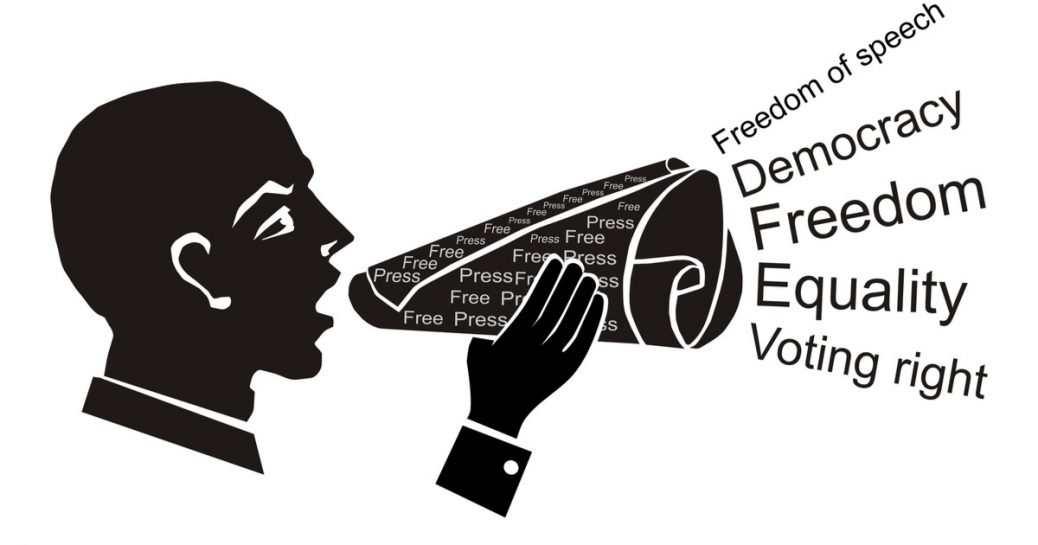 Congress shall make no law… abridging the freedom of speech, or of the press….

US CONSTITUTION, AMENDMENT I

This right is reserved for the people. It is an individual right, exercised by citizens of the United States. As such, individuals may seek protection when this right is infringed by government however there is no way that this right should be misconstrued to include the Press as a body, the Media as an institution or the New York Times as a legal entity. As such the New York Times becomes a stand-in or proxy for all companies that claim protection under the first amendment to wage information warfare.

Therefore, if an individual wants to publish their views in opposition to Trump they may do so. But, a person cannot use the New York Times to protect themselves from legal prosecution for slander and libel, to hide the identity of sources committing treason and espionage, and disseminate personal views as fact.

The original 17 amendments in the Bill of Rights passed by the House were even more clearly focused on individuals. In Article 14 “No state shall infringe the right of trial by jury in criminal cases, nor the rights of conscience, nor the freedom of speech, or of the press.” To link between trial by jury, rights of conscience, freedom of speech and press demonstrates that these are individual rights that allow people to avoid state control of what we think and how we express it. This listing runs into direct contradiction with a press that acts in concert with the state apparatus to control the thinking of large portions of the population.

John Kelly said on May 28, 2017 “it’s borderline, if not over the line of treason” to leak highly classified information. Gauging the value of classified information is not the jurisdiction of the New York Times. Media critics seem to nod to the Grey Lady, acknowledging that the NYT has been pretty good at determining what to reveal and not reveal concerning national security. They only release information that damages Republicans. This becomes a sticky situation constitutionally, because the executive branch, congress and courts need to negotiate the issue of classification and national security. Primarily, this issue needs to be defined in its proper constitutional context

When the New York Times publishes news/opinion that includes top secret, classified or sensitive material that is designed to maliciously influence the public or attack the proper role and function of the government of United States, we must have recourse. We need a way that is inside our regulatory and court system to prevent this undercutting of our republic. Without these distinctions, we have a court system that favors the agenda of corporate funded disinformation campaigns and leads to an anarchy of communication between citizens of this nation.

Donald Trump raised some eyebrows higher than he normally does when he claimed:

The FAKE NEWS media (failing @nytimes, @NBCNews, @ABC, @CBS, @CNN) is not my enemy, it is the enemy of the American People!

Is the media acting as an enemy of the American People?

Many Republicans may think so. In a recent YouGov poll 55% of the 365 Republicans in the sample of 1492 US adults surveyed said that they favor permitting the courts to fine news media outlets for publishing or broadcasting stories that are biased or inaccurate. Setting aside the punishment for disinformation: fines, stocks, or wrist slaps? And setting aside the proper mechanism for adjudicating disinformation: courts, congress, state bodies, or the DOJ? Whether or not the media is biased and inaccurate is a claim that can be supported and refuted by facts.

We all know the editorial bias inherent in the NYT reporting. We have numerous examples of puff pieces and slanted coverage from the 1960’s through today. It is apparent that the NYT favored Democrats with endorsements, but their support of specific liberal politicians was opinion-shaping. They protected Bill Clinton from being removed from office after being impeached. How do we assess the NYT agenda?

We have a better understanding of how the NYT collaborated with the Obama administration with the revelations about how Susan Rice used national security means to cover Trump and unmasked Gen. Flynn in conversations with the Russian ambassador. Obama’s NSA “tapped” Trump’s “wires” and revealed through leaks information about his contacts. We now know what the Obama Administration was doing. We have evidence about the political targeting of Trump – that can be corroborated by investigators and the DOJ.

The fact that this information showed up the NY Times demonstrates the link between the liberals and the media. Even if tangentially or with plausible deniability, the NYT used government surveillance in an attempt to destroy Trump. Nothing can possibly excuse this egregious and heinous violation of our government, freedom or Constitution by Obama and his liberal hacks. That is why they are a threat to our country. This is not speculation any more about what some unnamed government office might do.

The Media Research Center from Brent Bozell provides a review on the depth of corruption in the media generally. From CNN colluding with the DNC and Donna Brazile, this is reflective of the dispersion of the media agenda through networked agendas in various companies and organizations. The Press included slanted coverage that the MRC has been overexposed. The scope of this list is devastating. As a point of comparison, Project Veritas by James O’Keefe is doing the investigative reporting (such as releasing the Planned Parenthood videos) that the media is supposed to do, but deliberately ignores.  While the media in the form of MSNBC and Mika Brzezinski tells people what to think, intentionally misleads viewers and readers.

According to Eugene Volokh, from state constitutions, in an Appeal to the Inhabitants of Quebec written by the First Continental Congress in 1774, and in the Constitutional Convention the freedom of the press was protected for various purposes. The press was to support “the search and attainment of truth, scientific progress, cultural development, the increase of virtue among the people, the holding of governmental officials to republican values, the strengthening of community, and a check upon self-aggrandizing politicians.” These are not done by the media, or the NYT. It is done by everyone!

Vohkle continues, John Marshall, argued that the free press guarantee meant only “liberty to publish, free from previous restraint.” This indicates that we the people are free from requirements that printers be licensed or that content must be approved by the state before publication. This has nothing to do with blanket amnesty for illicit activities performed in the name of the NYT. Marshall and other Federalists argued that the freedom of the press must necessarily be limited, because “government cannot be…secured, if by falsehood and malicious slander, it is to be deprived of the confidence and affection of the people.”

Yet, Madison and other anti-Federalist Republicans supported even speech that creates “a contempt, a disrepute, or hatred [of the government] among the people.” We don’t have a problem with contempt for government, however character assassination in the form of Republican takedowns have nothing to do with limited government. Instead this insulates the establishment from being tossed out themselves. Some founders believed that hatred may be justified “by a free examination” of the government. Good luck when the Establishment prohibits examination, even with the Freedom of Information Act releases by the ACJ which reveal media collusion are highly redacted.

Fast-forward to the modern US Supreme Court, Justice Scalia and Thomas saw anonymity as constitutionally protected. This anonymity is for individuals publishing under assumed names. Because speech and press are conflated it’s worth noting these exceptions to protection in cases of incitement, false statements of fact, obscenity, pornography, threats, intellectual property violations, and in commercial advertising

The violation of these restrictions is imposed by the government acting as sovereign and backed by the threat of jail terms, fines, or civil liability.

To claim, with fear and trembling, that Trump may shut down the media leads to all manner of inane idiocy. Comparing Trump to Lincoln might normally be met with many nods and some askance views, but jailing newspaper editors during the Civil War is not a valid point of comparison. One must make the distinction between what you believe Trump might do and what Obama and the media have done.

Stephen Miller debating Jim Acosta or the communications department removing some reporters from the Whitehouse press briefing room should not lead to idle speculation about what Trump might do to limit the press. These people are not the Press, they are agents of the Deep State and should be treated as such.

Any PR excesses of Trump does not remotely match the destructive power of these media properties. Stemming back to the 1970’s, Watergate and the Vietnam War the Washington Post set the tone for the NYT by ensuring the ouster of a President and the failure of the US military operations in a foreign conflict.

Trump understands the media and their game. He lobs tweet bombs himself. He facilitates the denotation of other media bombs to completely throw people off of their game. Most people don’t know how to respond to the media. The media has corrupted the minds of an entire generation of Americans. If the Trump administration reconstitutes the relationship between the people and these companies to strengthen our own ability to publish and spread the truth it will be moving in the right direction.