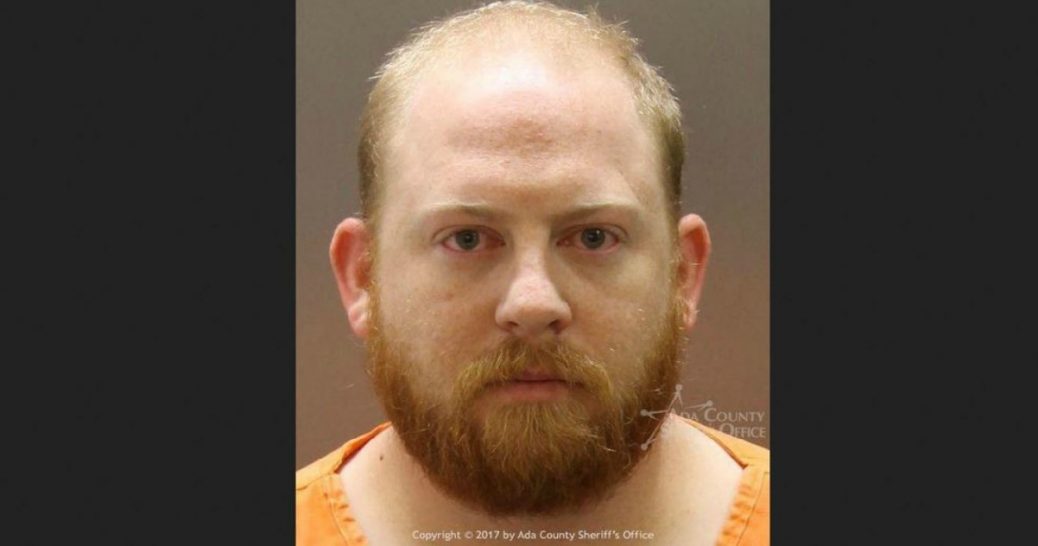 from the Ada County Sheriff's Office

BOISE 10/6/17—The chaplaincy is the most TOTALLY DEDICATED ministry there is. Chaplains put others first and go to them at their time and place of need.  MANY of those encountered give their hearts to Christ and are baptized.

Before leaving California I had a baptismal ceremony for 27 individuals, including children who had been dedicated to the Lord years earlier and had now made their own decision, as a result of chaplaincy. There were several such baptisms over time.

Sadly, there are those who defile this very SACRED assignment from God. This week, a CHAPLAIN APPRENTICE in St. Luke’s Hospital in Boise, Idaho, 30 year old Kevin Forbes, was before a judge. He had hung around the child’s Play area in a mall at Boise Town Square, took over 30 photos up a child’s dress before he was caught and charged with 2 Felonies.

What I want to know is how nobody saw this, intervened and smashed his head into the ground while he was taking these lewd photos up this child’s skirt?  He of course was dismissed from all duties at St. Luke’s Hospital. If I ever see him, he will receive the backhand of fellowship.

ON THAT SAME DAY, a Catholic Priest, who was just ordained that very day was caught fondling a young woman. Both of these so-called “men of God” were front page stories in the Idaho Statesman which all the unsaved saw. Neither of these men were CALLED to the ministry. They CHOSE ministry as a career. And this is the problem by which they disgraced the titles; Chaplain and Priest. Ministry is not something you choose, it is something God chooses YOU for.

There is a stern message taught in chaplain classes: Keep the Vessel Clean…..AND…keep your mind clean.  Obviously, neither of these two men had been taught such.They were strictly ‘career ministers.’ They are the biggest ministry problems today. And Called Ministers, MAN YOU PULPITS.

When I first started in the ministry in New York, a very young Benny Hinn was also preaching in the same area. Controversies about him were swirling. I once personally saw him screaming at his staff in view of the public.  The story below about him is another example .It was written by his nephew and published in Christianity Today.  We are to serve God, not ourselves. Click the link below. I promise you will be—maybe not—shocked at what you read about his ministry and personal life.

I don’t think at the end of the lives of the two above, that God will say to them: “Well done my good and faithful servant.” Instead I believe God will say, “Satan, here they come. They’re all yours.”

There are many CALLED pastors who are wonderful ministers of God and LIVE the Christian life. Hopefully, you have one in your area. Go to that church he pastors without delay.

Thoughts on the Las Vegas Shooting:

An eyewitness SAW two persons in that room as the shooting began. Before the slaughter, the shooter wired a huge sum of money to his girl friend in the Philippines, who had just flown there before the attack of the Country Western Festival in Vegas. The Philippines is known as a hotbed for Muslim Terrorists.

I do NOT think he committed suicide since he had his car ready to flee. It looks as though he planned other attacks since dynamite ingredients were found in his car, which would be typical for Muslim murderers. He also took videos of the killing spree. ISIS members always photograph their terror strikes.

It was seen on the ISIS website that yes, he had joined up as an Islamic Soldier 6 months ago. One thing this writer has learned, new recruits to any organization will go to the extreme of the organization’s goals immediately to prove themselves worthy to be with that group.

But one thing does not make sense.  He had been accumulating weapons for 20 years. So that is a puzzle since he had only, according to reports,  joined ISIS six months ago.

I think his live-in Filipino girl friend is lying. You cannot live with someone for that long without knowing more about the person they are living with. She cannot know NOTHING about her partner as she claims.

Dr. Phil McGraw flew to Vegas to visit wounded victims of the shootings and taped it for his TV show, which this writer saw today.  His counsel was great and soothing. It was one of those patients that said that the moment the shooting began, he looked back at the Hotel and SAW TWO MEN IN THAT ROOM.

The News Media, owned by George Soros, mainly falsified the accounts of the shooting, leaving too many blanks in the story for readers to really know what this was about. Some of those I listed above.  Again, he had planned his getaway, so it is improbable that he ‘committed suicide.’

Also, this was not shown in the media. Investigators found a 22 caliber bullet shell among the others, when he supposedly used high power assault rifles with machine gun capabilities. Yet everyone there is tight lipped in order to deceive us.

Meanwhile, while all of this is going on, Governor Moonbeam of California strikes again. He has signed a bill to put ANYONE in jail if they….now get this….do not use the proper gender pronoun when addressing a Trannie. That’s a tall order since they now have 57 individual gender pronouns.

And the latest is this that you will not believe. This column did not believe it until doing some research. It’s true. California Governor Jerry Brown, Governor Moonbeam, is about to sign a bill that would–again, sit down…..that would penalize anyone laughing….yes you read that right. “Because,” Gov. Moonbeam reasoned, “Laughing is usually at someone else’s expense which could hurt their feelings.” Oh…now it makes sense….at least in California.

I’m so glad we left that place. Very happy in my little spread outside New York.