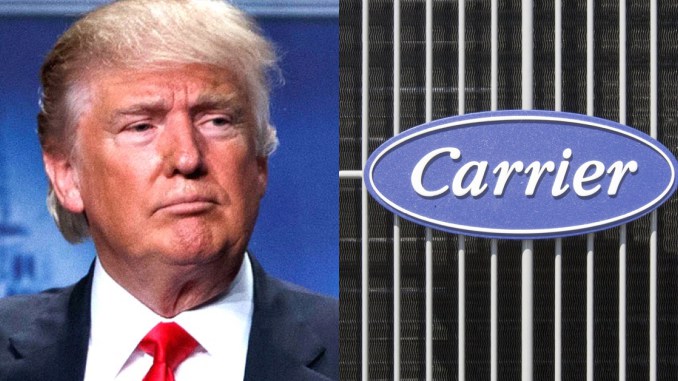 The deal-maker turned American President has begun making America great again before he’s even taken office. On Wednesday, the President-Elect announced a deal with Carrier Corporation to keep over 1,000 jobs in the United States. Carrier Corporation had announced plans to move almost all of their manufacturing capacity to Mexico earlier this fall.

President-Elect Trump and Vice-President Mike Pence will meet with Carrier employees in Indiana on Thursday to formally announce the deal. As reported by the New York Times:

“From the earliest days of his campaign, Donald J. Trump made keeping manufacturing jobs in the United States his signature economic issue, and the decision by Carrier, the big air-conditioner company, to move 2,000 of them from Indiana to Mexico was a tailor-made talking point for him on the stump. On Thursday, Mr. Trump and Mike Pence, Indiana’s governor and the vice-president elect, plan to appear at Carrier’s Indianapolis plant to announce they’ve struck a deal with the company to keep roughly half of the jobs in the state, according to officials with the transition team as well as Carrier.”

Earlier in the campaign, leaked video from a Carrier corporate meeting telling employees of the move to Mexico made waves as Trump used it as an example of the globalist liberal agenda damaging the American economy, particularly in the Rust Belt.

“The deal reportedly will keep a majority of the jobs in the state in exchange for friendlier business regulations and an overhauling of the corporate tax code,” reports the Hill in reference to what President Trump offered to Carrier.

This deal comes as welcome news to both the people of Indiana and the country at large. If this type of America-first deal making is the type of action, and fulfillment of campaign promises, we can expect from a Trump presidency America will surely be great again much sooner than later.