Genderless Bathrooms: The Left Clawing at the Fabric of American Culture 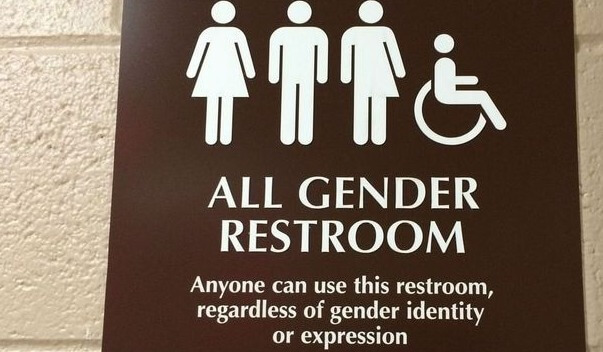 I was raised in a time when in this country the idea of genderless public bathrooms would be so abhorrent to anyone with even half a brain that the proponents of the idea would be run out of town on a rail. I am talking about a time when God, common sense and logic enjoyed a much larger place in the public square. Ah yes, common sense and logic, two virtues that are conspicuously absent in the mind of most liberals, progressives, leftists et al.

The current occupant of the Whitehouse stated in 2008 that he wanted to fundamentally transform the USA, and so far he has succeeded in alarming fashion. Why? Because there has been no significant opposition to any of his agenda now for 7+ years. Using executive actions to bypass a Congress he seems to feel only inhibits his goals, and the hits just keep on coming
I firmly believe that the majority of the American people flatly reject most of this crap being thrown at them almost on a daily basis. So they look to the alleged smartest people in the world, politicians, to fix the mess, but alas, nothing changes despite the promises made during election campaigns. There are precious few voices of opposition that emerge from the vacuous noises coming from Washington and some state houses, but they are soon overwhelmed by the establishment whose primary goal in life appears only to be the acquisition of money and power.
The liberals started out by gently nudging society to the left with such agendas as political correctness, diversity studies, fairness, and social justice issues just to name a few, claiming that America has been deeply flawed since its inception, and what better way to change the country but to chip away at the moral fabric that has held this nation together. This slow but never ending process will eventually change America to better fit in the new world order they dream of. The American people begrudgingly went along, and that was a sign of weakness to the liberals and they soon exploited it to their advantage.

Now the nudging became a push as the left exploited the voices of discontent in the gay community to rally support for LGBT rights, then marriage, People who wanted to keep the institution of marriage between a man and a woman were called sexists bigots or worse. Then the push to legalize medical marijuana which led to recreational use in some states as well. Anyone who opposed that was called cold and insensitive.

Now pushing has become shoving as President Obama issued an executive edict that all bathrooms, showers, and locker rooms in public schools and institutions shall be genderless, and to insure cooperation he had the Attorney General issue the threat of suspension of federal moneys and lawsuits to any state that did not comply. This edict does not carry the force of law but that won’t stop the dark forces advancing it. The problem with this is that public schools and institutions are dependent on funding from the federal government. This is blackmail pure and simple coming to you from a sitting President and his cadre of enforcers who use their power to advance his personal agenda with no regard whatsoever for the Constitution. This poses a major issue for public institutions because now they are forced to choose between money and their mission statement. Those that capitulate and comply are sending the message that government edicts carry more weight than the value of education, and what does that say to the millions of American’s whose children are in the public schools? This edict clearly opens the door to any sexual deviants looking to have their way with unsuspecting children.

Many of the issues the left pushes can be reasonably debated but having them rammed down our throats time and again is completely unacceptable, and must not be tolerated .Using the courts to advance the agenda is the primary tool the left employs because they know that they almost always loose when it goes through the legislatures and the voters.
Beyond the obvious corruption in government, the main culprit in the misdirection if information is the Media who have clearly taken sides with the left, mostly because the majority of people in the media are hard core liberals anyway. If they were to actually conduct themselves as the journalists they profess to be, and not the lapdog sycophants they are, most of the liberal agenda would fail and we would not be where we are today.

It is painfully obvious that between the politicians, the media, and courts packed with liberals it will be a long haul to correct all this. I have always believed that the American people will eventually be the true arbiters of meaningful change that will restore the principals our founding fathers and bring God, common sense, and logic back into the public square. The left in all of its iterations will never stop in their quest to transform the USA and so patriotic Americans must push back with unyielding resolve lest we become just another lifeless, socialist welfare state.