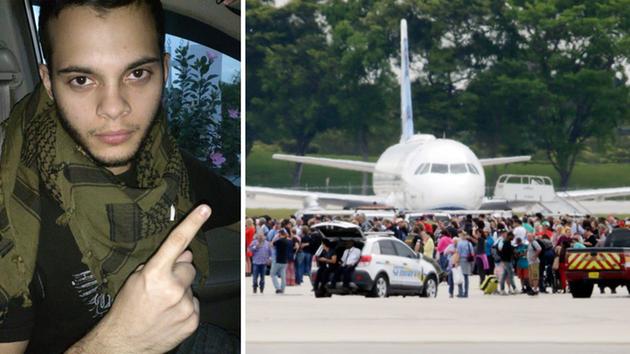 Since becoming president, Obama has allowed many terror attacks to be successfully committed against Americans.

This didn’t happen under President Bush and I don’t expect it to happen under President Trump.  In the last few years there have been successful mass murders by Islamic terrorists and psychotics who follow their example.  Obama Democrats always blame Americans and our gun laws when it is clearly the doing of Leftarts.  The man who did the shooting in Ft. Lauderdale was under FBI investigation and all agencies were notified that he is dangerous.  Yet he was allowed to get a gun, get on a plane with a gun in his luggage with ammo, and commit this atrocity and NOT ONE agency that was watching him lifted a finger to stop him.  That kind of epic failure can only happen deliberately!

Ft. Lauderdale shooter told FBI ISIS was in his mind

This guy even reported himself to the FBI as being influenced by ISIS.  Why anyone who is even on a terror watch list is even in American when they are not citizens is not just a crime, it’s a betrayal.  Why any psychotic is allowed to get and travel with a gun is not just negligence, it’s a crime.  Liberals want to blame gun manufacturers, gun dealers, and gun owners who support the 2nd Amendment.  They blame the military for training soldiers and sending them to war, and they blame President Bush for fighting the Jihad that attacked us for decades before America invaded Iraq.  No doubt they’ll blame Gov. Sarah Palin because he’s from her state, and Gov. Scott Walker because his state is where he waged his psychotic Jihad in the name of the god that infected him.  Leftarts will blame everyone and everything that is righteous before they will blame the shooter and his ideology.

Islam is a death cult of which 90% of Americans are ignorant.  Muhammad was the Hitler of his day, an Al Capone who demanded to be put in charge, and when he wasn’t he went to war.  This is the way of all leftist leaders who are the ultimate control freak sociopaths who don’t care whom they have to kill to get what they want.  Obama allowed these terror attacks to occur to intimidate Americans and dupe fools into accepting his solution which is to disarm Americans because he is an Islamist jihadi.  This is how Islam has always worked from Muhammad.  The worst of society, the criminal, the mentally ill, the hateful are all corrupted and brainwashed into believing that murder and oppression in the name of Allah are righteous.

No doubt Leftarts will say this is the fault of the Right and use their usual excuses.  Until America understands that the most dangerous ideology in the world is the ultimate Leftart death cult of Islam this will continue.  The Democrats, who say they fear government spying on potential jihadis under Bush, but are thrilled with government spying on citizens of the TEA Party by Obama, are the cancer that is killing this country with their warped, twisted, dysfunctional moral compass.

Flushing Obama’s legacy down the toilet

Forging the death cult of Islam

Media Blackout on Jihadist Attacks Around the World