Five Important Questions for President Trump from the American People 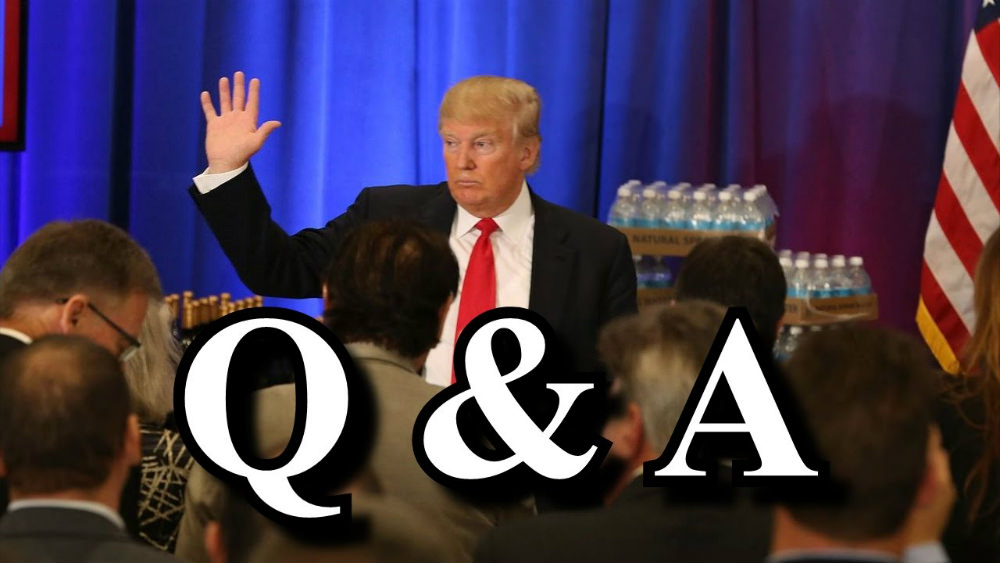 We won the election, but we haven’t yet defeated Washington.  Donald Trump has a mandate and that is not a mandate to work with Democrats or be part of the Washington corruption.

President Trump, what will be your legacy?  Building a big brick wall along with Mexican border?  Working with the GOP?  Reaching out to Democrats?  Appeasing Moslems?  Or will it be reigniting our economy, rebuilding our military, stopping foreigners from infiltrating and subverting America, and making America a bastion of liberty against leftist tyranny?

Democrats have been dismantled under the Obama regime that destroyed America’s military, economy, and culture.  In the last eight years they have lost not only the presidency and congress, 11 Senate seats and 60 House seats, but also seven state governorships leaving the U.S. now 31R-18D, and state legislatures 32R-15D-5S.  There are only five states left that have Democrats in complete control totaling 77 electoral votes with only one, California at 55, of significant size.  Is it any wonder conservatives couldn’t care less if California seceded and became independent or part of Mexico?

There are two issues that concern America’s future; the economy and foreign policy.  Each has three sub-elements.  My five questions concern those elements and the Supreme Court:

How The Donald conducts policies over these issues will determine the fate of this nation.

Obama is crowing over his 55% approval rating, but 70% of the country detests his policies taking America down the wrong road.  Suffice it to say that many will not speak out against him so that they are not accused of being racist, but Obama has done more damage to America during his term than the Democrat Party has done over the last century.  Obama’s personal charm is the only reason he has a positive approval rating, but that begs the question; have you ever met Lucifer?  The Prince of Lies did not become ruler of Hell by being vicious and ugly.  Speaking of which, liberals are saying Republicans like Rudy Giuliani are “not qualified” to be Secretary of State “because of ‘questionable’ ties to foreign states.  Can you say Hillary Clinton?  This is the kind of two-faced, corrupt stupidity you can expect from the Democrat media for the next four plus years!  They have no problem with Hillary’s deep financial ties in the hundreds of millions to America’s enemies, but let a Republican be gifted a few bucks from someone and it is treason incarnate!

Donald Trump is not the charmer that Obama is, but he speaks his mind honestly and openly rather than deceiving and misleading as to his true intentions.  The politically incorrect businessman is a deal maker who strives to get the job done and doing what he says he will do.  It is a matter of pride that he succeeds in his policies to make America great again.  Despite Limbaugh’s prayers that Obama fail, he succeeded despite liberals saying hoping Obama failed is hoping the country failed.  Now that Trump is prepared to undo the damage done by Obama, liberals are praying not only that Trump fails, but that if he succeeds then they hope America fails.  How’s that for two-faced hypocrisy?

Leftwingnut PSYOPS to destroy the righteous

The Donald gives all the indications that the Trump Team is going to hit the ground running and be pushing for all things conservatives have been demanding of government for years.  The liberal media is going apoplectic in trying to smear Trump in any way they can imagine.  I think it will be an incredible ride to see what he can accomplish and watch how dirty and vile the leftwingnut media can become.  One thing is certain – Donald Trump will not allow the leftwing media to smear him as they did George W. Bush.  Both the DNC and RNC will be fighting against reforms with the media and the socialist America haters on their side so there are going to be lots of fireworks!  The war for America’s soul has been joined and Trump had best be on his guard not just against slanders as the Left is responsible for every presidential assassination in America’s history!