Drain the Swamp: Control Immigration and Make Us One Nation! 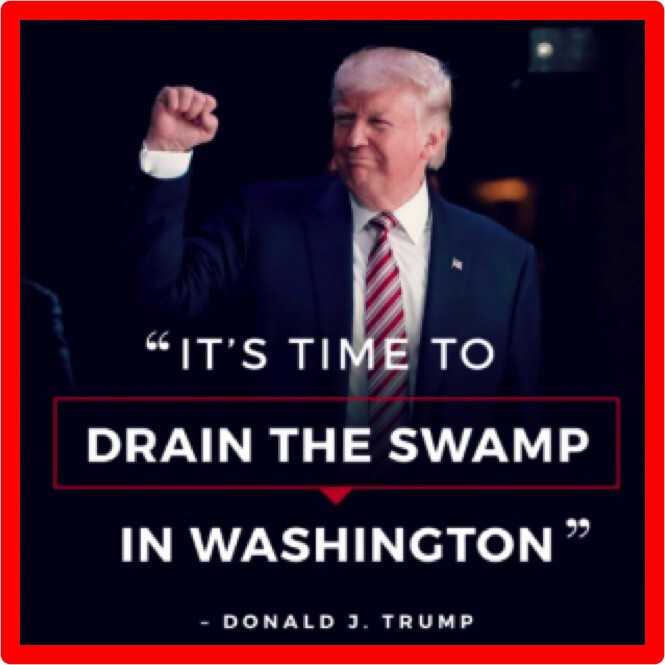 The first thing President Trump needs to do is make America one Nation. He has already stated that Immigration must benefit our National Interest: “It is our right as a sovereign nation to choose immigrants that we think are the likeliest to thrive and flourish here;”* and who will assimilate into our culture; instead of trying to change it to suit themselves.

Immigration is a Privilege America grants to Foreigners. But there are far too many foreigners who think they have the absolute right to come to America. In the words of the hijab clad woman who gave her name as “F*ck America”: “You stole it from the Indians, it doesn’t belong to you!”* In response, Anne Coulter says: “My ancestors were not immigrants. They were settlers. There was no America until we built it!” These foreigners displace our students at Universities and take their scholarships and grants; displace our workers at their jobs; isolate themselves into separate ethnic enclaves; and never assimilate. They demand all kinds of “rights” and accommodation for the same culture they chose to leave because their cultures never provided American freedoms or prosperity; and yet, they constantly call us “racists,” and “Islamophobes.” We all know now that calling us “racist” is a way to advance themselves at our expense. They take the full panoply of benefits from America; but they give nothing in return; not even respect for our Country, our Constitution, our Institutions and our Flag.

Here are some suggestions to help President Trump accomplish his goal:

No More Burning our Flag for Any Reason: Americans must show respect for our flag; the symbol of our National Identity. Thousands of our heroes have died to protect that flag and the freedoms for which is stands. We have provided exceptions to free speech and criminalized “hate speech” against all kinds of minorities – Muslims, Transgenders, etc. We can do the same for our flag. Burning the flag is the most extreme form of hate speech – it offends a huge majority of Americans, not just Veterans. No need for judges or jail time. The penalty: Require peace officers to immediately confiscate and destroy the precious cell phones of anyone caught burning our flag. And, as a condition of obtaining any more precious government benefits; require the perp to pass a class in American History taught by Hillsdale College or a Veteran Graduate of West Point; exactly like we require classes to work off a traffic ticket. That’ll do it!

No more Refusing to Stand for our Anthem: If the NFL any organization chooses to play our anthem; then it must make its players stand and show proper respect. The NFL deploys armies of security guards who immediately drag off any misbehaving spectator. They should do the same for any player, or that punk singer of our national anthem, who chooses to kneel. The penalty if the NFL doesn’t play our Anthem: Its fans, mostly conservatives, will stop attending/watching or buying products of its sponsors. The penalty if its players show disrespect: Automatic fines against the NFL.

Every American must swear fealty to America and to our Constitution: If you have to take an oath of office or citizenship; you take it on the Bible, as our founding fathers did. If you don’t want to, you take your oath on the Constitution itself. You do not get to take your oath on the Qu’ran, which is diametrically opposed to the Bible on which our Constitution is based; on the Bhagavad Gita; the Satan’s Prayer; the Kama Sutra; the obscene and vulgar lyrics of Beyonce’s latest song; or whatever else you fancy.

English is Our Official Language: We will no longer be a Tower of Bable, divided into warring ethnic groups. English unites us. We must learn it as a condition of becoming American citizens. There will not be any more signs, ballots, DMV instructions, school instruction etc in other languages.

You are either an American or not: You can be loyal only to one country. No more dual citizenship to maintain fealty to your home country, while you put America second and yet gain the benefits of America. Or to conceal business dealings and assets abroad. Also, you won’t be able to use an US passport to fly to a friendly country and then use that second passport to go to a terrorist country and get trained by ISIS.

You behave like a traitor and you lose your citizenship and your right to return: If you are aged 12-40 and you travel to a terrorist supporting country and stay for over a week; you are presumed to be going there for terrorist training. You will not be permitted to reenter the country. Like the Tsarnaevs, you came here as a “refugee” claiming you were in mortal fear in your home country. This fear should override any desire to visit any (real or imagined) sick and dying relatives. Talk to them over Skype.

Illegals: President Trump has already promised to deport criminal illegals. He will decide how to handle the others. Other Presidents, notably Herbert Hoover, Franklin Roosevelt, Harry Truman, and Dwight Eisenhower* have deported millions of illegals when our National Interest required it. This would not result in separation of families. No need for liberal bleeding hearts to weep – Nobody is preventing those adults from taking their minor children with them as they leave. At the very least, instead of calling us “racists” all the time; let’s all acknowledge that virtually all of the illegals came to America because it is a far, far better place to live than the poverty stricken, authoritarian places from which they came. People from Mexico and the like are subject to crushing poverty, no education and incredible cruelty and murder by criminal, drug dealing gangs. People from the Middle East are treated like slaves by their despotic masters; and their women and gays are subject to being stoned or beheaded or thrown off the tops of buildings. Many of those Muslims come here and mouth off against America – Listen to this female in a hijab sneering at America, dropping F bombs and shouting her name is “F*ck America” as she illegally purchases supplies for her store with food stamps.* Do you think they would dare to open their mouths against any ruler of Iran, Saudi Arabia or any other Muslim country? So, let’s cut out the name calling against America and Americans.

No More Birthright Citizenship: No more baby tourism from China, Mexico, Saudi Arabia and the rest of the world. Airlines that bring in pregnant women will be responsible to all the costs of the birth and the repatriation. Did you know China Airlines actually has rows of bassinets inside their planes going back from America to China to accommodate all the many mothers with little babies born here?

No More Family Reunification Visas leading to Citizenship: When I entered, my doctor husband nevertheless had to certify I would not become a public charge and guarantee he would pay all costs for me. Want to bring your family? You must first pay back all the government benefits you and your family have received; demonstrate you are capable of looking after the newcomers financially, and guarantee payment of all their costs, even if you divorce. No more bringing in one wife; divorcing her by saying “talak;” importing and marrying another wife in a niqah ceremony; and putting yourself, all the wives and all the kids on welfare. If you are bringing in your parents; then you guarantee and file a bond they will not apply for any social security, medical or disability benefits. Did the rest of you know that most immigrants are using this trick to access our funds and our health system for their parents who have never paid in a penny?

No more Refugee Visas, Student Visas, Clerical Visas. UN Visas, Lottery Visas and Assorted Visa Tricks: There will be only one set of rules for entry to, and stay in, America. Visas will signify the purpose and duration of the entry. Only America will grant those visas.

Visa Holders will be required to carry their visa with them at all times, just like they carry their driver’s licenses, and will be deported if their visa has expired. No more going to liberal judges who grant endless extensions of time to permit the visa holder to disappear; while neither the judge or the attorney who sought the stay get penalized. There will be a special court to deal expeditiously with this.

Citizenship & Visa Documents: Anyone granted these papers after 2001 would have to re-enroll and have their papers verified. Trying to get more Democrat voters, Obama violated the Constitution and court orders and rushed through Citizenship for people who were not qualified. These fraudulent papers will be cancelled. After this, every American will be issued a new, national biometric identification card (NBIC). Peter Thiel, a brilliant tech guy, will be the perfect person to get this program running “under budget and ahead of schedule;” without the usual government bureaucratic ineptitude and cost overruns.

Voter Rolls & ID: While we are at it, someone like Christian Adams should be put in charge of setting up a nationwide system of Voter rolls based on NBIC’s. (Before liberals and their judges make a fuss about this, consider that Master Card & Visa issue billions of credit cards, which function perfectly well.) People the liberals claim can’t get an ID will be given 3 months to come before a Judge and explain how they get their welfare and other benefits if they really don’t have a valid ID. Dead people will not be allowed to vote. Duplicate registrations will be cancelled. After that, Judges will not longer have jurisdiction to deny any State that requires a proper ID card to vote.

Build the Wall: Obama sent our troops to Ebola stricken Liberia & Sierra Leone to build hospitals, roads and bridges. President Trump can use them to build the wall; and he’ll do it under budget and ahead of schedule. To fund it, he can apply an income tax on the billions being repatriated to Mexico and other countries. Income tax is not being collected from repatriations; though it is collected from the salaries of hard working Americans! Alternatively, President Trump will negotiate with Mexican President Enrique Pen Nieto for funding. Both countries will benefit from stopping the endless flow of drugs, criminals, and illegals through their countries.

Thank God for opening the eyes of the American People to the extreme corruption of Obama & Hillary and giving us President Trump. He will Drain the Swamp!