NOTE: This article was published in 2007. Little has changed in the ten years since then as far as the facts that led the United States to its current position. Much has changed in the numbers, however. For instance, during the reign of Barrack Obama, $10 Trillion was added to the National Debt. That is more than the debt added by all the presidents before him combined in over 230 years.

A few years ago, as the stock market experienced wild ups and downs, I watched 5 guest panelists on CNBC express their opinions on the reasons for the volatility. Actually, seven people interrupted and talked over one another in their zeal to get their points across. The two hosts, who were supposed to be interviewing the five panelists, spent most of the time expressing their own opinions. The one common denominator was that all seven continually referred to “The Fed,” wondering how that institution might move to solve the problem. I laughed out loud! These were supposedly sophisticated people, representatives of financial and educational institutions and think tanks. And yet they seemed to be as painfully ignorant of the truth concerning the “The Fed” (more formally known as “The Federal Reserve System”) as the average American on the street.

The simple truth is that The Federal Reserve System is neither federal, nor does it have any reserves. The Fed is a system of private banks, owned by rich foreign and American bankers. It is the biggest scam ever perpetrated upon the American people. It is the reason we have inflation.

The Fed is also behind the huge increase in the National Debt, which has ballooned BY 646% since 1967 (see chart above). In 1967 the amount every American would have to pony up to pay off the national debt was about $28,000. Today that number is in excess of $180,000. But don’t worry. The debt will never be paid off. Like all banks, the Fed would rather have the interest on the loan (the National Debt) than the principal, because they make trillions of dollars from the US being in debt. 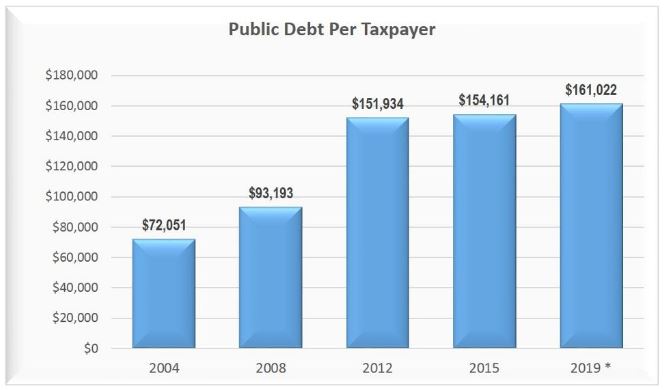 The Bible teaches us that the debtor is a slave to the lender. That is the relationship of the United States of America to The Federal Reserve System. Our government (and by extension every American) is a slave to the private bankers who own The Fed.

“But wait a minute! Doesn’t the government control The Fed? Doesn’t the president appoint the Chairman of the Federal Reserve?” Yes, the president appoints the Chairman. And no, the government does not control The Fed. In fact, it is the other way around. The Federal Reserve System controls the government. Baron M. Rothschild once wrote, “Give me control over a nation’s currency and I care not who makes its laws.” The Fed has taken the Baron one step further. It not only controls the currency; it also controls the politicians. Believe me, no one could ever become the Chairman of The Fed without the okay of the unbelievably wealthy foreign and American bankers who control this nation.

FEDERAL: As I said above, there is nothing Federal about The Fed. It is as federal as FedEx. It is not owned or even controlled by the Federal government. It prints worthless money, and lends that money to our government, charging the government (and We, the People) interest on the worthless money it prints.

RESERVE: The Fed itself has no reserves. And its member banks are only required to maintain 10% reserves (in some cases less). That means they can lend out $10 Million for very $1 Million they have on deposit. What a scam! To make matters worse, they pay us pitiful returns on our money, ranging from ¼% to (if you’re wealthy and have a CD worth a hundred thousand dollars or more) a few percent. Then they lend out our money at four to forty times the interest they pay us.

SYSTEM: This word was deliberately used to mislead the American people. The Fed is a Central Bank, much like most Socialist European countries have. It is actually the third Central Bank forced upon the American people (I’ll bet they left that out of your history book). Both other attempts led the nation down the road to ruin, causing financial disasters and causing Americans to mistrust any type of Central Bank. Thus the use of the word System rather than Bank.

True to form, The Fed caused the crash of 1929 and the resulting Great depression. In just two months the stock market lost fifty per cent of its value. The life savings of many were wiped out, and hundreds committed suicide. Millions lost homes and businesses through home foreclosures and banks calling in the loans of businesses. Guess who got those homes and commercial properties? You’re catching on. The filthy rich (and morally filthy) bankers of the Federal Reserve System.

Louis McFadden who was Chairman of the House Banking Committee during the1930’s said about the stock market crash of 1929: “It was not accidental; it was a carefully contrived occurrence. The international bankers sought to bring about a condition of despair so that they might emerge as ruler of us all.”

No one worked harder to expose the corruption of The Fed than Louis T. McFadden. On June 10, 1932, he spoke on the floor of the House of Representatives, “We have in this country one of the most corrupt institutions the world has ever known. I refer to the Federal Reserve Board, which has cheated the government of the United States out of enough money to pay the national debt. The depredations and the inequities of the Federal Reserve Board and the Federal Reserve banks acting together have cost this country enough money to pay the national debt several times over. This evil institution has impoverished and ruined the people of the United States; has bankrupted itself, and has practically bankrupted our government. It has done this through the  maladministration of that law by which the Federal Reserve Board exists, and through the corrupt practices of the moneyed vultures who control it.”

He doesn’t sound like a big fan of The Fed, does he? Neither were the Founding Fathers, who (having suffered under the central banks of Europe and knowing of their evils) wrote strong language into the Constitution forbidding just such institutions as The Federal Reserve System?

In a letter to his friend John Taylor on May 28, 1816, Thomas Jefferson – one of the most influential and respected of our Founding Fathers, called Central Banking as a “blot left in all our Constitutions, which, if not covered, will end in their destruction.” He went on to say that funding (taxation) should be limited to the “redemption of the debt within the lives of the majority of the generation contracting it” so that each generation would enter the world the way God intended – unencumbered by the debts of their parents. He ended his letter by saying, “I sincerely believe, with you, that banking establishments are more dangerous than standing armies; and that the principle of spending money to be paid by posterity, under the name of funding, is but swindling futurity on a large scale.” It’s a terrible shame that our current politicians don’t believe, as Jefferson did, that it is a crime for us to create debt and leave it for our children and grandchildren to pay.

President Andrew Jackson hated the Central Bank of his day – The Second Bank of the United States – because it was unconstitutional. To him, the Bank symbolized how a privileged class of businesspeople had oppressed the will of the common people of the United States. Naturally, the bankers and the politicians who benefitted from the Bank fought him when he started to dismantle it. In perhaps his most famous quote, he proclaimed, “The Bank is trying to kill me…but I will kill the Bank.” Well, he did kill the Bank in 1933.

This was the second time a Central Bank had been defeated. So the US and foreign bankers who schemed to create our third Central Bank, the Fed, put language in the Federal Reserve Act to ensure that it could never be repealed. Of course, that is unconstitutional, but so far it has beaten back all attempts to dismantle the unconstitutional cartel.

So will the private bankers who own The Fed help stabilize our markets? Only if it helps line their pockets. In 1929, just sixteen years following the evil pact that created the cartel we know as The Fed, the bankers could easily have prevented the coming Depression by simply pumping money into the market to stimulate the economy and to get it going again. Instead, they did exactly the opposite when they severely limited the money supply. Why? Because it was best for them – even though they are in a position of trust and charged with doing what is best for the nation. (Remember those trillions of dollars worth of properties they took from their owners and later sold at fat profits?)

VIDEO: How to Benefit from $5,000 Gold
http://www.christianfinancialconcepts.com/article.php?id=4536