Why Do Political Parties Have Platforms If They’re Not Going to Abide By Them? 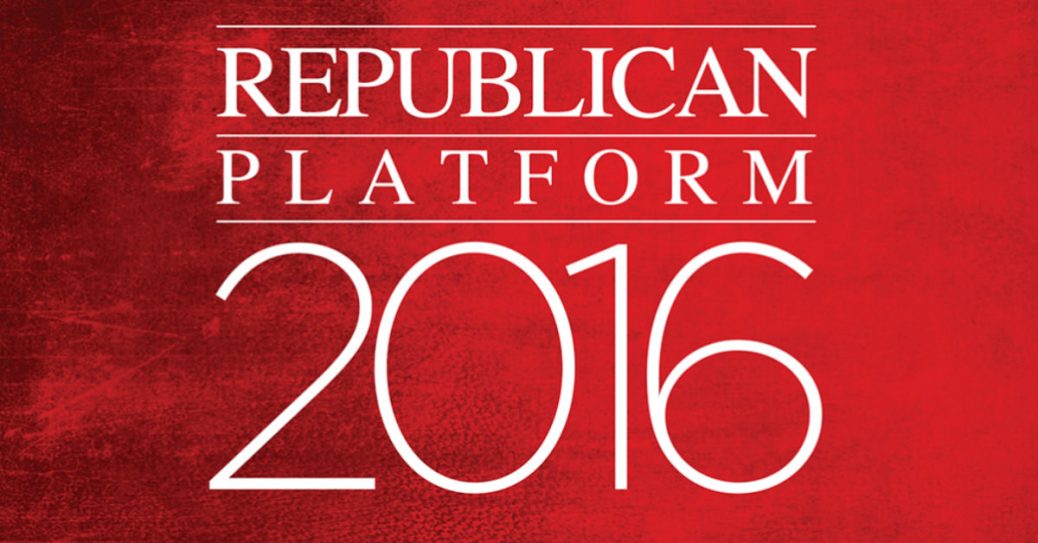 Last year, I was very encouraged by much of what the GOP platform stated. Yes, I’m one of those weird people who actually read it. Apparently, most of our elected Republican officials in DC either didn’t read it or dismissed it after they won. There are key elements that are getting missed.

Before anyone says “it’s too early to judge,” let’s take a few things into consideration. “Reducing the Federal Debt” is a big one that’s highlighted on page 8 of the platform. It discusses spending restraints as “a necessary component that must be vigorously pursued.” Thus far, the only proposals coming out of Congress have been to increase the debt. They promised to reduce it and I’d even accept it if they just kept it in check but with budget talks reaching a head at the end of the month, it’s almost certain that they’re going to raise it. Why put that in the platform if you’re just going to do the opposite?

“Defending Marriage Against an Activist Judiciary” is a big part of the platform, as is defending religious liberties. So far, nothing positive in this regard has even sniffed the President’s desk and actions from the administration seem bent on keeping the new status quo in regards to both marriage and religious freedoms. Judge Gorsuch was a nice addition, but his presence on the bench will not be able to defend marriage if Congress doesn’t give him something to defend.

Then, we get to the least discussed promise in the platform. “Federalism as the Foundation of Personal Liberty” outlines states’ rights and how the 10th Amendment must be brought to prominence once again. Other than Scott Pruitt at the EPA, no other efforts have been hinted at by any Republicans in DC from Congress to the White House. In fact, there have been direct attacks on the concepts of Federalism within the administration as they discuss imposing Washington’s will on the states when it comes to crime, immigration, and trade.

One of the most popular Republican issues of the day is how to handle sanctuary cities. I’m not a supporter of these havens of illegal immigration, but there’s a proper way for the government to reward states who crack down on sanctuary cities rather than harm those who do not. Mandates from DC that do not include sufficient compensation are tyrannical and force states to comply or feel the wrath of the fed. That’s not how the founders intended it, nor is it necessary to achieve the end results. We can rid our nation of sanctuary cities through federal assistance. When DC uses mandates and punishments to push their agenda, the end result is never good even if the intentions are righteous.

Don’t get me started on their stated platform promise to balance the budget when we have a trillion dollar infrastructure project to pay for on top of everything else that’s been flying around DC for the past three months. At what point to do we stop accepting that the Republicans are slightly less liberal than the Democrats? When are we going to tell them that being better isn’t good enough?

The GOP platform is nothing more than a piece of digital paper. The Democrats are even worse. It’s no coincidence that the Federalist Party’s idea for holding politicians accountable to the platform is getting attention from both major parties. If our elected officials are unwilling to fulfill the promises they sign, why should we believe they’ll do anything they say?