Fascist Facebook is in Violation of 18 U.S. Code – Chapter 115 via Ideological Subversion 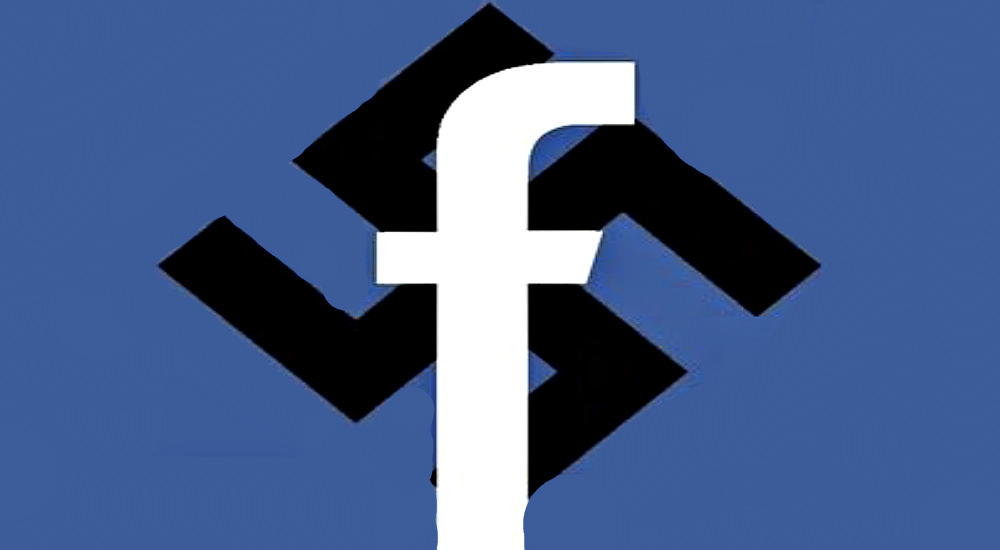 For many years I enjoyed this web-based invention called Facebook where there was an easy-to-use system, which I and like-minded individuals could share news and experiences with each other. However, since Donald Trump tossed his hat in the running for President, and especially since he won that election…this has all changed. I remember 3 years ago or so I could do and say whatever I wanted on Facebook, but in 2017 my account gets shut down every other week for posts which do not align with the “progressive” ideology. Throughout history, we have seen tyrants and dictators act in such a way by burning the books and literature of those who oppose them. Nowadays, the fascists have a new way of silencing their critics and that method is by online censorship.

This is not anything new, and I am not anyone special, this is happening to MANY people. Anyone who stands against the fascistic leftists has seen similar activity against them, or knows someone who has been censored. Facebook will claim you have “violated their terms of service,” but then you go and read the terms of service and realize you violated NOTHING. Their moderating leftist-liberal employees must be getting offended by differing opinions, and like Berkeley campus Antifa scumbags, Facebook aims to shut-down those opposing their dictatorial way of thinking.

I have been censored and had my account shut down on many occasions over the past year, each time for something different. This most recent time was because I claimed that I was “going to go ‘Trans-Hulk’ on all of these transsexuals pushing their agenda on the people of the world.” Apparently Facebook doesn’t like me being judgmental and spreading so-called ‘hate-speech’ against its transsexual users. Is it really ‘hate-speech?’ I mean…if transsexuals offend me, Facebook doesn’t censor or shut down their accounts. Does Facebook REALLY care if someone is offended? No, they do not. If you do not align with the so-called progressive ideology, then your opinion or what YOU are offended by does not matter one iota.

It isn’t that I have something against being inclusive; I support gay marriage even though I do not understand why 2 people of the same sex would want to marry each other. I myself am not a homosexual, but I hold nothing against those that are. Although frankly, I think the homosexual movement have taken their newly awarded rights and gone a little too far, pushing their agenda on young people and also people who want nothing to do with it via Hollywood, the entertainment industry and the mainstream media. It seems that these days, you aren’t “cool” unless you are gay…and that is taking it over-the-top if you asked me. Sexuality is a person’s private business, and it doesn’t need to be celebrated or flaunted regardless of what the sexual preference is. You don’t see “straight-pride” parades with people half-naked flaunting their disgusting bodies in front of crowds…yet homosexuals feel the need to do this for some reason. But, this is America, and homosexuals have the right to do this if they so please.

Transsexuals on the other hand, have taken their movement and gone absolutely insane with it. You can literally be a “trans-tree” and “self-identity” as a tree and every Facebook user and member of society is expected to accept your delusions and refer to you with the proper pronoun. Well, Mr. /Mrs. (did I just assume your pronoun, I’m sorry about that) tree-person, the people of the world do NOT need to be accepting of your insanity. If a person thinks they are something they are not, that used to be called “crazy.” We used to take these people and put them in a padded cell where they belong. Placating to the delusions of crazy people is leading to mass-delusions, and quite frankly it is putting us on a dangerous path for the future. These are not just some kind-hearted people who want to be accepted for who they are, these are crazy people who want to make everyone else crazy rather than seek mental help.

But this is not an article about my thoughts on transgenderism; it is an article about censorship. I just wanted to be clear with whoever is reading this article of where my thoughts lie and why. I do not support the transgender movement, but my opinion matters nil in the eyes of Facebook. They claim that I violated their terms of service for posting offensive content, and I sent them a response asking “what about me being offended by transgenderism? Personally, I find transsexuals to be delusional and disgusting.” I went on to explain just how out of control this trans movement has become.  There is a new form of transsexuals called “transage,” where older people “self-identify” as younger people and it is only a matter of time before they turn-around and use that as an excuse to be a pedophile. As a father of a young child, I find this beyond offensive, in fact I find it to be” utter repulsive and approaching the point of illegalities, yet you allow this behavior and actually encourage it by censoring people like me.” I received no response, and my account is still shut down.

I know that I am not alone in my thinking; however Facebook isolates me to feel as though I am. An article from 2015 explains my thoughts precisely.

“What if I told you that there was a married man with 7 children who left his wife and kids and now lives with another family where he believes he is a 6-year-old girl? Would you say that he had serious mental and emotional issues and needed professional help? That would be the expected reaction, but today, we must expect the unexpected. And so, we are now told that this man is both transgender and transager. Some people are even celebrating this madness.” (Anderson, 2015)

I am genuinely surprised that this article has not been removed from the web entirely given the amount of ideological subversion taking place. While the leftists proclaim that President Donald Trump and his supporters are “fascists,” they themselves are the ones in modern society who are acting fascistically. It is not just Facebook; it is almost ALL social media and much of the websites across the internet. If you do not fall in-line with the so-called progressive ideology, you will be censored and shut down, and this is the very definition of fascism.

Fascist: a political philosophy, movement, or regime (such as that of the Fascisti) that exalts nation and often race above the individual and that stands for a centralized autocratic government headed by a dictatorial leader, severe economic and social regimentation, and forcible suppression of opposition. (Merriam Webster, 2017)

Subversion: the act of subverting :  the state of being subverted; especially :  a systematic attempt to overthrow or undermine a government or political system by persons working secretly from within. (Merriam Webster, 2017)

My research shows that this is not by chance somehow that the controllers of our media are doing this. They have a specific agenda in-mind and it is NOT an American agenda. Leftists claim to want Socialism; however what they REALLY want is Communism on a large-scale in America. The end-goal here is the utter destruction of Western society as we have all known it. The election of Donald Trump was a revolt against these Communist dirt-bags, and they simply cannot handle it. A former KGB agent named Yuri Bezmenov told the American people many times just what the plan behind the progressive ideology actually was, and we are only now seeing it play out on this massive scale.

Facebook, YouTube, the mainstream media, Hollywood, and many other media sources are literally committing a crime by censoring its users and subverting America by censoring free-speech. The law that covers the behavior being played out is called 18 U.S. Code Chapter 115 – Treason, Sedition, and Subversive Activities (Cornell University , 2017). By censoring me, and many others who stand against the so-called progressive ideology, these media organizations are subverting the Constitution and the will of the American people. The controllers and CEOs of these organizations should be imprisoned for their seditious subversion, and yet they are somehow allowed to carry on with this behavior.

This is not as simple as some guy who got censored on social media. This is wide-spread and it is only growing worse. The intention behind censorship is to silence those with a different way of thinking, and it has nothing to do with offensive content. The only people, who would find my “trans-hulk” post offensive, are those who do not think like me. Our free-speech does NOT stop where the progressive’s begins. They are censoring our voices because they do not agree with them…not to save people’s feelings. This is a clear violation of the 1st Amendment in America, and Facebook is now on-par with Antifa scumbags who shut down conservative speeches and events with violence and by force. There is a specific agenda behind what they are doing; it is NOT just a “violation of terms of service.”