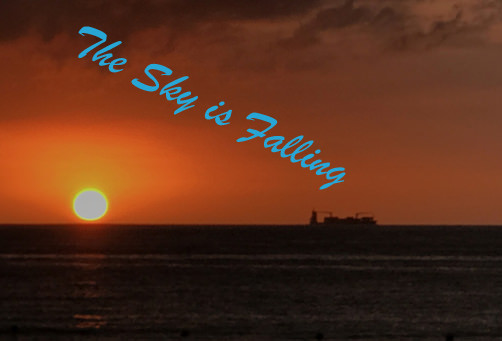 The sky is falling. And climate is changing. But just as the cause of the sky falling wasn’t quite what Chicken Little feared, the cause of climate change may not be what climate  alarmists fear.

Climate change has been a fact for thousands of years. Even before human industrial activity contributed the first gram of carbon dioxide (CO2) to the atmosphere, climate repeatedly cycled between warming and cooling trends. (Graphs, such as the one produced by longrangeweather.com, chronicle over 4,000 years of significant swings in global temperatures.)

Yet according to numerous climatologists, in spite of numerous other sources, the burning of fossil fuels is the primary reason for increasing CO2 emissions and the only one worthy of the full focus of regulatory agencies. And it comes as little surprise that among governments throughout the world, the most popular means of addressing CO2 emissions is through some form of taxation or manipulation (cap-and-trade and “offsetting”).

As a means of attempting to reduce CO2 emissions and collecting additional revenue, several nations signed on to the Kyoto Protocols, a CO2 emissions reduction agreement between several industrialized nations (excluding the United States). The agreement took effect in 2005, yet since that time, atmospheric levels of CO2 have not only continued to increase, they have increased at faster rates than prior to the signing of the agreement. Climate data compiled by NASA specifies that during the 11 years between January, 2005 (when the Kyoto Protocol agreement went into effect) and December, 2016, atmospheric CO2 levels increased from 371.21 parts per million (ppm); to 405.25, an increase of 34.04 ppm.

In contrast, according to National Oceanic and Atmospheric Administration data for the 11-year period preceding the Kyoto agreement (January, 1994 through December, 2005) CO2 levels increased only 21.87 ppm, from 358.24 ppm to 380.11 ppm. The rate of increase in atmospheric CO2 levels was therefore 55.65% greater after the Kyoto Protocol agreement went into effect than before.

A graph of the above referenced statistics indicates that during the same period in which CO2 levels consistently increased, temperatures both increased and decreased in a saw tooth-like pattern. Neither NASA nor NOAA offer actual ocean or atmospheric temperature data, (or if they do, they are deeply hidden) but the Environmental Protection Agency estimates that between 1901 and 2015, sea surface temperatures have increased by .13 degrees (F) per decade.

Most scientific data appears to substantiate that sea surface and atmospheric temperatures have continually risen since the early 1900s. And while a majority of climatologists purport that warming temperatures are almost exclusively a consequence of human activity in general, and industrial activities involving the burning of fossil fuels in particular, there’s little proof of those assumptions being true.

As the accompanying graph demonstrates, CO2 levels have continued to rise since 1958, yet during that same period of time, atmospheric temperatures have both increased and decreased. That would appear to dispute a direct connection between CO2 levels and temperature increases.

But assume for a moment that rising atmospheric CO2 levels do in fact exacerbate the “greenhouse effect” (by reducing the amount of heat reflected back to space, thereby increasing the amount trapped within the earth’s atmosphere). And assume that human activity is the primary cause of CO2 emissions. Why is it that industrial use of fossil fuels is virtually the sole focus of the science and politics of CO2 emissions reduction? That question is particularly revealing in consideration of a study by Greenpeace as reported in Business Week magazine (8/10/09 issue). The Business Week article stated, “Carbon released from slash-and-burn techniques, plus the loss of forest themselves, account for some 20% of global greenhouse gas emissions, the study notes, a larger share than that from all the world’s cars, planes, ships, trains, and trucks combined.”

Yet only a handful of organizations are working to reduce deforestation. And participants in accords such as the Kyoto Protocol appear to have turned a blind eye to the fires raging in what were once jungles.

World population is another aspect of the climate change equation that is largely ignored. Since 1959, world population has increased from 2.9 billion to approximately 7 billion. Concurrently, there has been a similar, if not greater increase in the activities devoted to providing food for the world’s population. Yet, the effect of the carbon footprint left by every member of the world population is ignored as contributing to atmospheric levels of CO2. This in spite of the fact that both world population and CO2 emissions have increased at persistent, and linear, rates.

Eyebrows are raised in response to the persistent increase in CO2 levels as much for what they portend for the future as what they represent of the past. Models predicting the future climate apocalypse are based on historic patterns. Yet, in its 2007 report, the Intergovernmental Panel on Climate Change (IPCC) states,

“we should recognise that we are dealing with a coupled nonlinear chaotic system, and therefore that the long-term prediction of future climate states is not possible.”

In spite of the conclusion that climate change is chaotic and nonlinear, governments throughout the world are proceeding as if CO2 levels will predictably cause the sky to fall and bring the planet to a boil. Such is the consequence of politicizing climate science.

That politicizing has led a majority of climatologists to state that recent changes in climate are strictly the consequence of human activity. A more realistic assessment is that the earth’s climate continues to change as it has for thousands of years; human activity is simply an overlay on the base cyclical patterns.

With 7 billion people inhabiting the planet, it certainly makes sense to reduce all potentially injurious emissions. However, as the failure of the Kyoto Protocol to reduce CO2 levels demonstrates, it will take significantly more than thinly veiled tax schemes and politicized “scientific findings” to make a significant impact.

It is ironic that climate change believers ridicule climate change deniers, while denying that anything other than human activity influences climate change. Climate change does exist. The challenges lie in determining the true degree of anthropogenic impact, and developing an honest approach to minimizing that impact.