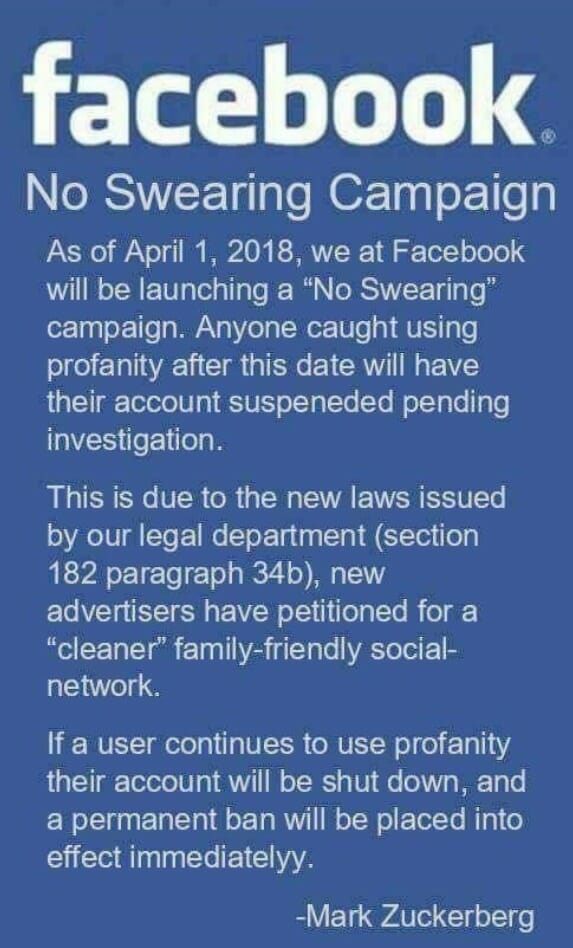 Above is a 2014 “Facebook” meme purportedly notifying users of a impending ban on swearing. It never happened.

The post going around Facebook in 2017/2018 about Facebook banning swearing, and showing that it was that would start on April 1, 2018, is a hoax. It shows that it was “approved” by Facebook co-creator Mark Zuckerberg.  Since the date falls on April Fools Day it is reasonable to conclude that it is intended as an ongoing April fools practical joke.

The 2014 Facebook hoax is similar to the hoax being perpetuated by immature instigators today shown in the meme below.

Though not swearing is preferable for most of us because it is distasteful, offensive, doing so shows a sign of disrespect, and a display of the inability for cognitive creativity in formulating intelligent arguments in constructive discourse, swearing will not be banned from Facebook.

This October 18, 2016 article, “Five Viral Facebook Hoaxes to Avoid” shows “the banning of swearing hoax,” among others that may occasionally surface on Facebook, has existed since at least 2014.

In a second article, which is from 2014, it points out that, “It should be noted that Facebook does not announce any policy changes via a graphic.” Facebook publicly announces policy changes through its newsroom.

In Facebook’s Community Standards it alludes to no ban on swearing.

We don’t tolerate bullying or harassment. We allow you to speak freely on matters and people of public interest, but remove content that appears to purposefully target private individuals with the intention of degrading or shaming them.