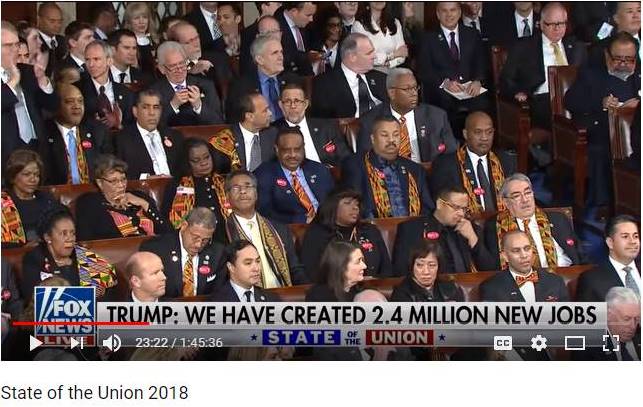 WASHINGTON,D.C.-1/30/18  There were more standing ovations at President Trumps’ State of The Union address tonight than any I have seen over the years.He hit the ball out of the park with every other line. The left side of the senate chambers were unresponsive.
Those weakly standing on that side, if at all, were the Communist Democrats with strained faces. They of course do not want people to be happy, prosperous, free or safe. That is not the communist way. Everyone MUST be directed in all activities doncha know.
Nancy Pelosi had such a scowl on her face that she must have been weaned on sour pickles. The man sitting next to her, had a face so long that I looked closely to see if there were any exit signs on it. They sat on their butts during the whole time and just stared, as did most of those in that section.
One line said by President Trump was so powerful that loud applause erupted, a communist on the left side started to stand and a man next to him grabbed him by the arm and pulled him back down to his seat. That was fully captured on camera and very telling.
The President laid out his plans for America bolstered by the incredible things he DID accomplish during his first year in office more than any new president in history. It was a positive, uplifting speech of hope, that covered every area of life today and ahead.
As the grumpy faces of the Democrat Communists remained glued, the audience cheered President Trump’s message. We could not help but wonder, how any group of people could not be happy of what our president has done already but what he promises for the future which will enrich our lives.
All those on the left side of the chambers’ floor, the Communist Democrats, were not happy. They do NOT want the people to be happy, enriched or prosperous since they want everyone to be in poverty with no freedoms including freedom of movement or traveling without their permission. That IS the Communist way.
The speech went an hour and 40 minutes with at least 40 standing ovations.
Then came the rebuttal to the speech by Joe Kennedy 3rd, the grandson of Bobby Kennedy. The speech was televised from Massachusetts. This was difficult for this writer since I am a cousin of that family. My great great aunt was the sister of Rose Kennedy.

It was the worst rebuttal speech ever given. He described Trump’s speech as depressing, a speech with no hope and he went on a rant declaring all the things that, due to Trump,  were wrong with this country. He attacked Trump, yet he never addressed anything or quoted any points from his talk that he could attack. It was just a blanket criticism with no clear definition of what he was yakking about.

Let’s begin to really analyze Trump’s speech since Kennedy stated on TV that the speech was depressing. NO IT WAS NOT!  Indeed it was anything BUT that. The address President Trump made to the nation was indeed inspiring, motivating and FULL of hope for all of us.

The issues of today that bothered Joe Kennedy, were the very things Trump promised to correct. It was not a smorgasbord of confusion, suffering and loss of all freedoms as Kennedy suggested the world has been in since the inauguration of President Donald Trump.

It was a very dishonest, cunning, and downright stupid response. This is where the “divide” of our country has originated. On the left side of the aisle.