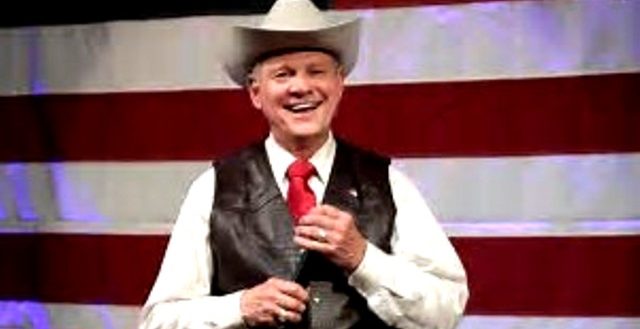 Alabama Senatorial candidate Judge Roy Moore’s one serious accuser, Barbara Nelson, has admitted she forged the yearbook note and signature she had presented as evidence with the help of hard-left, high profile lady lawyer Gloria Alred appearing on every major media and PBS evening news program.

While there are several versions of the story, including that she only forged the “DA” initials after Moore’s signature, and they do clearly appear to have come from a different pen, but it is hard to ignore her stepson’s testimony:  “She’s lying through her teeth,” he said.  “She’s wrong for this…she’s wrong as Hell.”

Barbara Nelson claimed she worked as a waitress at a local restaurant where a young Roy Moore ate dinner every night.  She claimed he sat at the bar and she served him personally.  She further claims one night after the restaurant closed at 10 p.m. and her boyfriend did not come to pick her up  she agreed to Roy Moore taking her home, but he instead parked his car behind the restaurant, locked her in the car and forced himself on her.

This was so traumatic to her that she waited forty years to tell anybody and did not mention it to her boyfriend, or anyone else, that evening!  The unlikely elements of this story pile on when two waitresses and a former policeman who frequented the restaurant during that time say they never saw Roy Moore in the place.  The police officer declared he knew Moore personally and never saw him there!

The waitresses say nobody ever came in wearing a suit and Mrs. Nelson claims and they would have remembered anyone who did regularly and had Moore sat at the bar, as Nelson claimed, he would have been served by the bartenders, not by the waitresses.

Furthermore: The restaurant did not close at 10 p.m. as Nelson claimed.  It always stayed open until 11 p.m. or midnight for workers from the factory next door that closed at 10 p.m.  And, one of the waitresses, who is a retired church music director, was so troubled by the false story she she wrote a statement and released it to the media, noting none of Barbara Nelson’s physical descriptions of the restaurant lot were accurate, listing several false details, but no major media company reported it.

It is significant that none of this has appeared on any of the major media papers or television broadcasts, including PBS which receives government funding and makes grand claims of being objective, unbiased and democratic.  Yes, they are Democratic all right, but with a big “D.”

Mr. Moore is a West Point graduate and Viet Nam war veteran who has had an otherwise stainless record until this candidacy.  All the other complaints are over 40 years old, 33 of which Judge Moore has been a married, family man with a stainless domestic record, i.e. no incidents of any kind.  In fact, ir anything Judge Moore has been downright boring.

The Democrats have been so thorough in their smear campaign they claimed he had been banned from the local mall and YMCA for harassing young women, which the Mall Manager and the YMCA Executive Director have both said were not true!

Judge Moore’s crimes in the Democrat’s minds are that he is a very solid,  Christian Constitutional conservative who has an ability to buck the establishment and recently been in a dog fight with a screaming liberal lawyer who supports Sanctuary Cities and transsexuals in submarines.  You cannot make these people up!  They are frothing-at-the-mount insane!