And after the Confirmation of Neil Gorsuch… 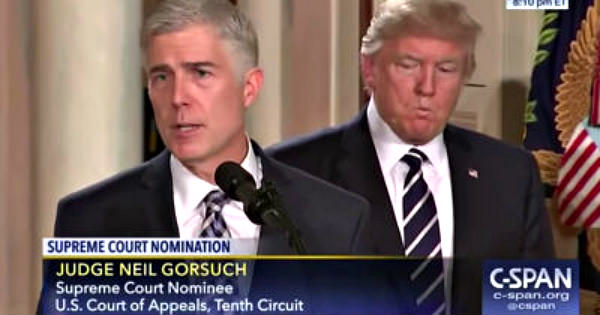 The crowning achievement thus far in the Trump Administration has been the selection of Neil Gorsuch as Supreme Court Justice. And it was a remarkably easy appointment to get through confirmation.

Republicans enthusiastically embraced Judge Gorsuch and Democrats were surprisingly unable to come up with any negativity in his legal background to use to blunt the selection, as Judge Gorsuch was quickly confirmed. It was a carefully considered and first-rate political appointment!

However, the next vacancy on the Supreme Court could prove to be more problematic.

The anti-Trump rhetoric coming from the Dems in the Senate, the never-Trump RINOS, and at-risk Republicans, ensure that the next Supreme Court vacancy will be much more difficult to confirm. And the vitriolic anti-Trump Press will most certainly add a calculated and aggravating background voice to any and all opposition.

The Democrats already feel that they are now entitled to have a left-leaning SCOTUS appointee… someone to counterbalance the right-wing influence of Justice Gorsuch, who is seen as the latter day equivalent to late Justice Antonin Scalia. Especially, since the next vacancy on the Court will, in all likelihood, occur when a liberal-minded justice retires or dies in office.

The Trump Administration should expect heavy opposition to any of the other listed “possibles” that were previously identified before the nomination of Justice Gorsuch.

To avoid all the anticipated and obviously harsh opposition from your political opponents, Mr. President, pick a SCOTUS nominee who is a Democrat… that no one under the influence of Chuck Schumer can refuse, not one that will only be rejected out of hand by Democrats and Liberals. And be certain to pick one who is a strict Constitutionalist in the mold of both Justice Gorsuch and the late Justice Scalia. ‘Seems like a Mission Impossible task and yet…

The one individual who meets that criteria perfectly is George Washington University Law Professor, Jonathan Turley.

Professor Turley is a high-visibility, relatively young, long-time Democrat, but a principled and squeaky-clean, widely-respected expert in Constitutional Law who will judge fairly while maintaining the original intent of the framers of the Constitution. The nomination of Professor Turley will leave Democrats, Liberals, and RINOs with no room to complain (Yeah… right) about his politics, and little or no basis for rejection.

The nomination of Professor Turley as the next SCOTUS appointee would be a winner in so many different ways.