Concealed Carry At Church: What Would Jesus Do? 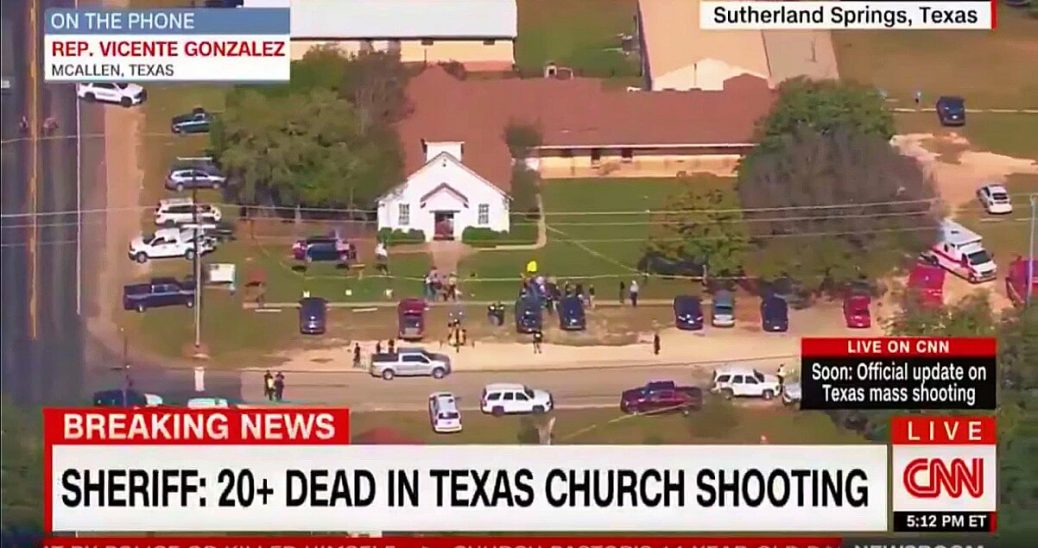 It was with great sadness that I learned of the sick happenings at the First Baptist Church of Southerland Springs, TX yesterday.

This is a congregation of God-loving and God-fearing folks in a part of the country wherein most folks will wear a gun while doing daily chores; but, most probably out of reverence for the church service, those with weapons left their first line of defense in their cars or at home. Accordingly, for those who encountered the evil sicko, Devin Kelley, what should have been a reverent day of keeping the Sabbath holy, turned into an evil man’s depraved personal shooting range with men, women, and children as defenseless and unsuspecting targets.

I could not help but compare and contrast the happenings in TX to my own (thanks be to God) uneventful weekend at my church. We were having a big push for ministries at our church this weekend. As an involved father of 8, I was asked to give a 9 minute pulpit announcement at certain masses, both on Saturday night and Sunday morning; telling my own story and encouraging folks to get more involved in the various ministries at our church. As a Bible-loving Catholic (yes, we exist), a good chunk of my talk was on the biblical justification for Catholics to do good works; since we vary from our Protestant brothers and sisters in that we don’t believe in the concept of sola fide. I used the Epistle of James (faith without works is dead) as well as the Gospel reading that was already scheduled for Sunday in order to make my points. The intention herein is not to argue in defense of the Catholic faith on what is the 500 year anniversary (to the week) of Martin Luther’s nailing of the 95 Theses to the church door; rather, I’m just providing a modicum of insight as to what I was up to. Since I’ve already digressed, as a further side-note, I enjoy going to Mass on a daily basis, and I always read my scripture in advance of attending Mass. Catholic readings are pre-scheduled on a 3 year rotational basis. Accordingly, folks who attend Mass daily and keep up with the readings actually read about 85% of the Bible every 3 year cycle….so Catholicism is actually rich in biblical anchoring for those who are willing and able to avail themselves of the full participation on a daily basis. The aforementioned being said, Catholic, Baptist Lutheran, Episcopalian, etc. we all love Christ and we want to be in Paradise at the end of this life. We have many common threads and we share a common eternal goal!

When I was behind the lectern this weekend, speaking to the hundreds of folks in front of me, there is something that very few people in the church knew: I had a Smith and Wesson J-frame 38 special in my front pocket; safely holstered within an Uncle Mike’s pocket holster. I carried a speed loader with an additional 5 rounds of Lehigh Defense X-treme defense ammo. But, that was my back-up! Gun aficionados know that revolvers never fail and there’s nothing to remember to chamber; but, they’re limited in capacity; so I prefer a semi-auto with good dropping capabilities as my first line of defense. As a primary carry, I had my Glock 30s 45 ACP carry gun holstered at the 6:00 position. I had 11 rounds of 45 ACP in the gun and I had another 13 rounds of back-up ammo (Lehigh Defense) in a spare mag in my back pocket. Did I need it? Thank God no. Was it a threat to those around me? No…it didn’t fire by itself; nor would / could it. It’s my “parachute” that I hope to never use. The J-frame is my “back-up chute.” Some folks might call it overkill. As I’m trying to be mindful of my fatherly duties to protect myself and my wife and 8 children, I would refer to it as underkill. I’d hate to figuratively be falling through the skies, in a self-defense situation, and have to think to myself, “Damn, I wish I had a parachute. I should not have left that gun in the car or at the house!”

“(b)  A license holder commits an offense if the license holder intentionally, knowingly, or recklessly carries a handgun under the authority of Subchapter H, Chapter 411, Government Code, regardless of whether the handgun is concealed, on or about the license holder’s person: (6) on the premises of a church, synagogue, or other established place of religious worship.” My understanding is that the preclusion to carry is in force in the event that there’s a posting not to carry at the church. I’m not sure if such a posting were there or if folks simply didn’t carry self-defense weapons in church because of reverence. At any rate, a few things are clear: (1) The shooter was not unfamiliar with the church. (2) He appeared to have picked a target whereupon he could shoot, unmolested, upon a mass of people without worrying about his own personal safety being in jeopardy. (3) He had plenty of time to reload, given the fact that no parishioner was returning fire (4) He fled the scene when a good guy with a gun showed up to return fire. How could things have ended differently at that church if just one parishioner were as prepared as I was yesterday? After all, the coward ran at the first sign of returned fire!

As mentioned above, I’m Catholic. I like to say that I’m both apologetically and unapologetically Catholic. I like to defend my faith and I’ll actually go so far as to say that carrying a weapon at Mass is a Catholic tradition that dates all the way back to the first Catholic Mass. Luke 22: 36-38 tells us, “36 He said to them,[a] “But now one who has a money bag should take it, and likewise a sack, and one who does not have a sword should sell his cloak and buy one. 37 For I tell you that this scripture must be fulfilled in me, namely, ‘He was counted among the wicked’; and indeed what is written about me is coming to fulfillment.” 38 Then they said, “Lord, look, there are two swords here.” But he replied, “It is enough!” Okay, so Catholics believe that the first Mass took place at the Last Supper, as Christ offered himself as the Sacrificial Lamb of God by offering His body and blood for the forgiveness of sins. Christ went on to charge us to continue to do the same in remembrance of Him. Okay, as Christians, we can have arguments over transubstantiation; however, we should agree on one key and central point: there were two swords (the advanced personal defense weapon of the day) there and present at the Last Supper. Jesus had the power to protect those who were physically with Him, yet, he allowed them to protect themselves. I repeat my assertion, that the ability to have a weapon at church goes all the way back to the first Mass at the Last Supper when Christ was present and so were two swords. Does Christ have a problem with weapons at church? Of course not, the Bible tells us what Jesus allowed to occur.

We’re still learning more about the evil man who caused so much pain and irreparable damage yesterday. So far, we know that he was dishonorably discharged from the military and that the basis for the discharge was domestic abuse. Either one of those instances should have precluded him from legally buying a gun through an FFL dealer. Those legally purchasing a weapon would have to complete ATF Form 4473 and go through an NICS database check for red flags. According to the laws already on the books, he was not eligible to own or to buy a gun; yet he had at least one. Folks who are intent on causing mass carnage do not follow existing or future gun laws; rather, those who legally carry for protection do….and they’ll go unarmed in a zone that precludes them from carrying. If existing laws on the books did not prevent this man from having a gun, why don’t we first look at what’s happening wrong under the current laws before we ask for more restrictions?

As for the question: WWJD (What Would Jesus Do)? I’d answer that by saying WDJA (What Did Jesus Allow)? The answers are there. Jesus loves us and he wants us to be safe. I can’t help but continue to think: how different would today be if just a two modern-day personal defense were there; just as two weapons were present at the Last Supper. Life could be so much more different for so many families. So much pain and carnage could have been avoided. People are quick to say, “If a gun law could save just one life it would be worth it.” I think of the hundreds of lives that could have been saved if we didn’t have 2nd Amendment free zones, wherein the legal