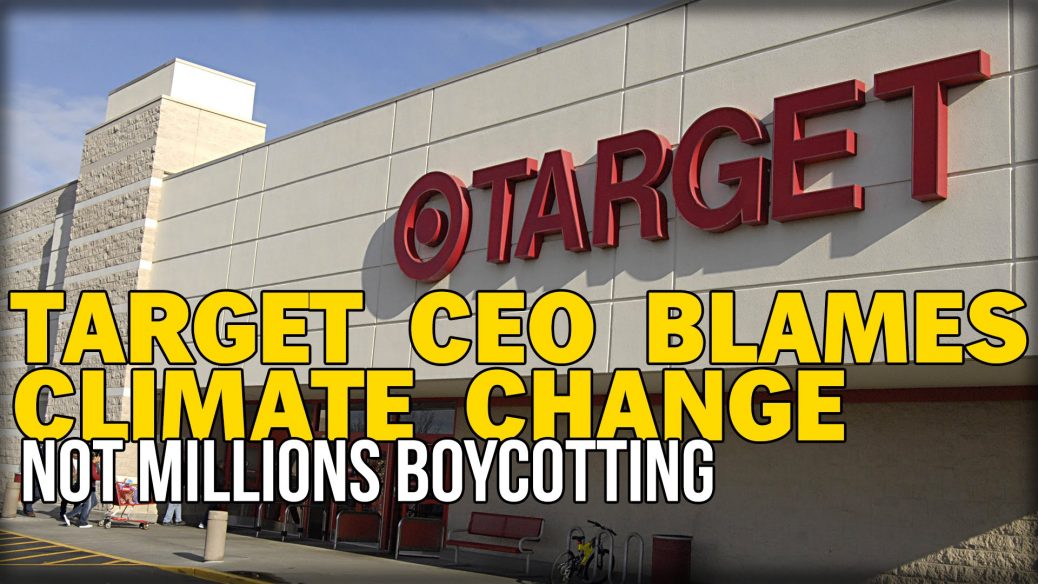 In a recent interview, Target CEO Brian Cornell blamed the epic market value drop of nearly $10 Billion in the company’s fortunes to the cold weather as opposed to anything the company did to itself.

“It’s been a very wet and cold start to the year and it’s reflected in our sales,” said Cornell. “We haven’t seen anything from a structural standpoint that gives us pause.”

Target has taken a major hit since it announced its pro-transgender bathroom policy, a decision that triggered a major boycott started by the American Family Association. The conservative Christian advocacy group initiated a petition urging people to boycott Target until it changed its policy, which the group claimed “endangers women and children by allowing men to frequent women’s facilities.” That movement earned 1.3 million signatures by late May and only growing in strength.

Target’s reputation has tumbled six points among consumers in the last several months. In the months prior to the bathroom policy announcement, 42 percent of consumers wanted to shop at Target, but in the following month this number dropped to 36 percent. The reports also found that consumer perception of the Target brand is at its lowest in two years. The Target stock (TGT) also was plummeting, and with the tumble, Target warned that its sales might be flat by the end of the second quarter.

In a statement to Fortune, a Target spokesperson acknowledged the controversy but said the retailer planned to stick with its new bathroom policy: “We certainly respect that there are a wide variety of perspectives and opinions,” the spokesperson said. “As a company that firmly stands behind what it means to offer our team an inclusive place to work—and our guests an inclusive place to shop—we continue to believe that this is the right thing for Target.” Target’s position also extends to its fitting rooms.

“Inclusivity is a core belief at Target,” the company said in a statement on its corporate website. “It’s something we celebrate. We stand for equality and equity, and strive to make our guests and team members feel accepted, respected and welcomed in our stores and workplaces every day.” Molly Snyder, a Target spokeswoman, said it is not a new policy, but the retailer wanted to clarify its position given questions it has received from both customers and employees amid the national debate. Executives sent an e-mail to store leaders earlier this week to convey the message. “It’s a restatement of a policy,” she said. “It’s just us being very overt in stating it.”

While Target’s announcement may not be popular with everyone, it will be more accepted by its core shopper base – the younger and more urban population, said Amy Koo, an analyst with Kantar Retail. “They’re going to do what’s in the interest of the business,” she said. “It doesn’t hurt them as much as it helps them.” This isn’t the first time Target has treaded into more controversial issues. Last fall, Target received both praise and criticism when it took down the gender-based signs in its toys and kids’ bedding aisles.

As you remember the very happy POTUS, with a bright smile reflecting his and his peers agenda on sexes equality, on April 19, 2016 signed into the law the pro-transgender bathroom policy (… like the WH does not have much more important things to do …). Once called perversion, this is now a “civil right.”

Truly, liberalism is a mental disorder, and most of the carriers of that sickness will never admit it. The “normal logic” assumes that the “bathroom thingy” must be left up to private companies, not state (or the feds!) governments, to set bathroom policies. But why would anyone feel safe in Target … especially women and young ladies? How can parents feel comfortable sending their daughters into the Target restroom?

Why Target would not hire 3-4 thousand new employees (bathroom attendants) for 1,793 stores in the United States, just for the safety of girls and ladies?