Chaplains Ordered to Not Talk to Homeless Vets ! 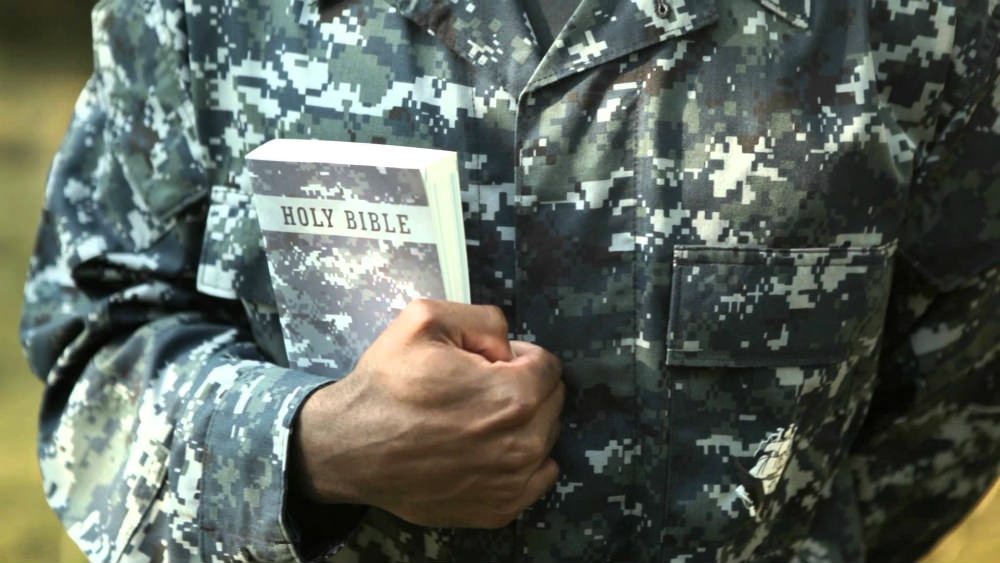 In 1960, the Veterans’ Administration organized a project called, “Stand Downs,” where homeless veterans would be bused in to an army camp set-up at a local fairground where they would get showers, new clothes, haircuts, 3 meals a day for the four day visit, and bunks to sleep in. They were also provided with medical, dental care, and there was even a legal tent where retired judges volunteered to help them resolve their legal disputes, allowing them to wipe the slate clean and start over anew. There were fire pits where they could relax and exchange their stories.

For most vets, the experience brought responses showing that the most meaningful part of that Stand Down, for them, were the presence of chaplains who not only helped them but ushered them into a new life.

The major Stand Down takes place every other year at the Alameda Fairgrounds in Pleasanton. General Dan Helix was in charge of that event, and the results were spectacular with lives changed as a result. The event would conclude with a Sunday service.

However, this year they changed the administration for that event, putting in charge a Liberal who came with an attitude, would not even show the courtesy of responding to my email letting him know that the East Bay Chaplains would register, and was never available to anyone who wanted to talk with him.

Chaplain Priscilla Martinez had been appointed the Chaplain Instructor since I will be moving out of state the last of this month. She called me to say that as the new chaplain candidates signed in, they were ordered to NOT greet the veterans as they exit the buses. WHAT?

Other restrictions were added. The chaplains were not to talk to anybody in the chow line and were not to “socialize” with the veterans. A livid General Dan Helix came to the site, pulled all the chaplains from the site, and went face-to-face with that arrogant administrator.

That personal greeting at the buses was very important to the vets, since they are homeless, meaning they live on the streets under the worst of conditions surrounded by uncertainty in every area of their lives.  These vets who come are confused, suspicious, depressed, angry, fearful, and suicidal. Some are addicts. They have been exploited. They do not know what to expect.

As each veteran is greeted, we first thank them for their service, let them know that this will be the best four days of their lives and that we are here for them and will be available at all times to talk to them or show them where the various services are located.  This creates a total positive first impression and relaxes them. Yet, that new administration says the chaplains are not to greet incoming vets.

The new chaplains will not be able to take part in the North Bay Stand Down which is directed by General Helix, since that one is Tuesday through Thursday in October, and those who have jobs cannot go. That participation is required for certification.  However, they will instead be doing work, feeding the homeless and will attend a mental health crash course, since chaplains will always deal with this condition.

The United States Military Chaplains are now objects of scorn to the government. They have been ordered, now get this, not to pray for anyone, and at funerals they are not to say, “God bless you,” as a flag is presented to a grieving family. One naval officer was court-martialed for having a Bible on his desk. Even though he had been appointed as a chaplain-minister-representative of God.This is what Obama has brought to this nation. And we have paid a price.

Today, Chaplain Priscilla was notified that some of the chaplains she trained had not heard this news and showed up yesterday afternoon and this morning and were ordered to ‘Stay in the Chaplains’ Tent” and off the grounds. In other words, stay out of sight.

This anti-God society we now inhabit has separated us from The One who could have protected us during the four attacks on American soil yesterday, thanks to Obama, who wants God out of sight and out of thought. He has replaced God with perversion and immorality, which defies every instruction that God gave us in The Bible. Yet they expect His Hand to protect them, even though they arrogantly dismissed him from their lives..

So where was God during those attacks yesterday?  The same place He has always been. But He will not intrude when misguided people want to abolish Him from society.

Yes, that stand down was a disaster.  Those homeless vets who came were indeed exploited, the very thing they feared might happen. They were brought to the event as propaganda to show how the benevolent government gives them stuff, which will result in “proper votes”. Sad.

PASTORS: Preach the uncompromising Word of God. At this coming election, Hillary has publicly declared that she will increase the stream of Muslims she is ushering into our country by over a million new ones. They will add to the bombings yesterday by Muslims who had been ushered into our country as ‘refugees.’  People, please T H I N K!

Added Note: There should be no such thing as a homeless veteran. Obama spends billions of dollars on useless projects, such as studying the effects of alcoholism on lesbians. These funds would be better used to provide housing to veterans on the street. Hopefully this nightmare will end in November.