Can We Please Repeal Dodd-Frank Already 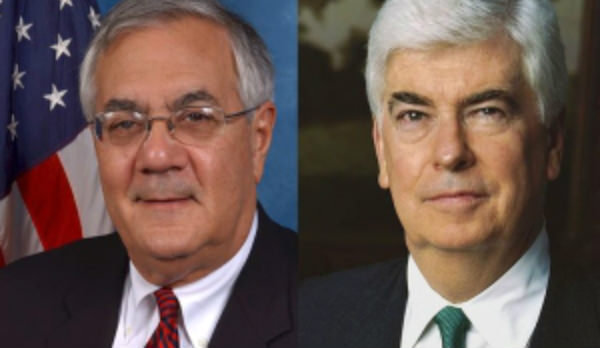 As most are aware, the government’s response to the mortgage/banking crisis was the passage of the “Wall Street Reform and Consumer Protection Act,” commonly known as Dodd-Frank, for the namesakes and supposed authors of the bill, Chris Dodd and Barney Fwank.

Dodd-Frank was signed into law on July 21, 2010, by our dear former president Obama. Practically the day after passage,

Republicans came forth en masse to protest the law and vow to repeal it.

Just yesterday Senator Orrin Hatch declared  Dodd-Frank to be, “worse than Obamacare. I think it’s one of the worst bills that’s ever been passed through Congress.” Hatch added that, “To treat all these banks like they’re a bunch of crooks and you have to watch everything they do is, I think, beyond the pale.”

Naturally, those on the left are all a-twitter, insisting that the infinitely more competent federal government must continue to keep these “crooks” and incompetents on Wall Street in check. Without government intervention, Wall Street and Mortgage banking would look like the Wild West.

So who’s right and who’s wrong, and just why did we need the over-burdening Dodd-Frank law to begin with?

Well – you can judge who is right or wrong, but to find out, we must strap ourselves in and set the way-back machine to the Carter-era Seventies. Hit It!

It all started with the “Community Reinvestment Act” (CRA), which was promoted and signed into law by progressive interventionalist, President Jimmy Carter.

As one would expect, during the Reagan years, Carter’s grand plan just languished in the shadows. It wasn’t until our next progressive, Bill Clinton, that the CRA got legs. Actually, more like wings or a jet pack.

Clinton rediscovered Carter’s plan and pumped it full of steroids. Through the power of his Justice Department and his stooge Janet Reno, he forced banks to offer mortgages to those who could not afford to purchase nor had a prayer of paying back the loan.

Reno threatened banks to make these loans with regulations and stiff penalties, so the banks, in turn, were forced to come up with ways to make the mortgages more palatable, such as “interest only” and “no documentation” loans. If one were of a “preferred” or “protected” class, one would not even have to prove he or she was employed.

All this, so the Clinton administration could show the voters how under Bubba’s rule, the American dream of owning a home could be realized.

So where did that leave the banks? In a mighty tough spot!

The government forced them to make bad loans, thus sticking them with a lot of worthless mortgages from people who couldn’t pay them.

Well, the banks could not just sit on this worthless investment. So with the aid of the corrupt quasi-government run Fannie Mae and Freddie Mac, the banks packaged the loans and called them “Mortgage Backed Securities” (MBS).

The banks then sold these “investments” to unsuspecting buyers who thought they would have a nice steady and stable income stream. Of course the buyers were wrong and upon discovering they had been duped, they simply repackaged the MBS and resold them. Eventually the scheme ran its course when there were no dupes left for whom to sell.

During this time the George W. Bush administration tried to clamp down on Freddie, Fannie and the banks, but were descended upon by powerful Democrats such as the aforementioned Barney Frank, Chris Dodd and Maxine Waters. The dems claimed that all was well and those trying to solve the problem just wanted to deny minorities the American dream of home ownership.

That, in a nutshell, was the cause of the housing crisis and subsequent financial meltdown. And once again, we are witness to another demonstration of the government causing a problem, then swooping in to attempt to fix it.

Like Obamacare, every word of Dodd-Frank must be repealed!