America Deserves Much ‘Beto’ than O’Rourke 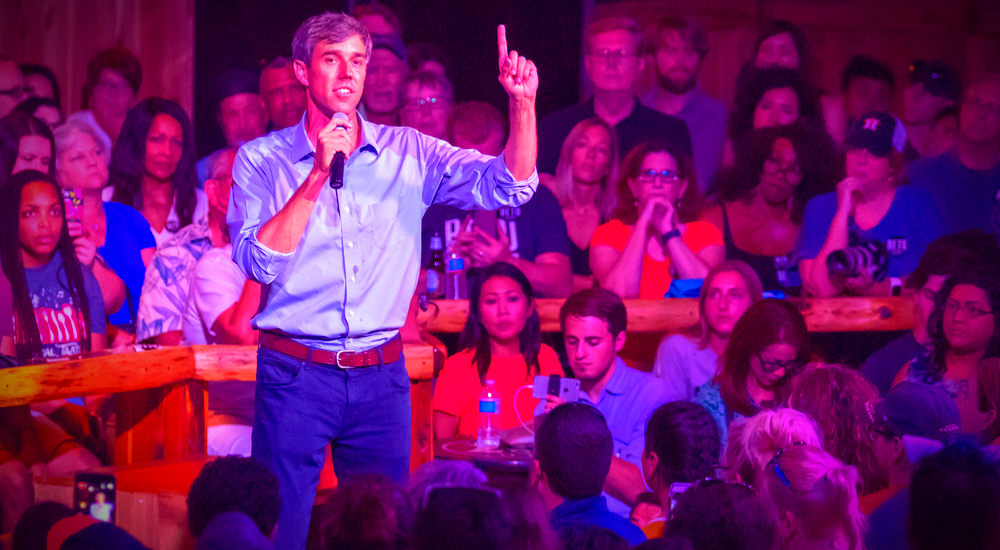 America Deserves Much Beto Than O’Rourke

Watching Beto O’Rourke announce his candidacy for president, I had snake oil salesman come to mind. Everything about this guy is fake, which makes him a perfect candidate for fake news media to celebrate.

My wife Mary and I spent several weeks in Texas campaigning for Ted Cruz, fighting to stop O’Rourke from stealing Cruz’s Senate seat. It was incredible watching O’Rourke’s TV ads. Funded with mega-millions from outsiders, O’Rourke’s entire US senate campaign was built upon deceiving voters.

For example: While claiming to be pro-second amendment, the great deceiver O’Rouke voted against every piece of pro-gun legislation that came to his desk. https://bit.ly/2T9sjvB To deceive voters into believing he is a regular guy, millionaire O’Rourke posted a video of himself in a laundromat doing laundry. https://bit.ly/2O86hZ9 O’Rourke came disturbingly close to scamming Texans into electing him over Ted Cruz.

In his elect-me-or-we’re-all-gonna-die presidential campaign announcement, O’Rourke claimed there are crises in our economy, democracy, and climate. O’Rourke urgently warned Americans that we are in a “moment of peril”. What on earth is O’Rourke talking about?

Our Economy: Trump has our economy booming. Black unemployment is the lowest in recorded history. https://bit.ly/2F8JhoT Hispanics and women are also doing great in Trump’s economy.

Our Climate: For the gazillionth time, man-made climate change is a proven hoax. https://bit.ly/2uanzM6 O’Rourke passionately warns that not embracing the Green New Deal will lead to the extinction of the human race in a decade or so. Here’s a reminder of the insanity in the Green New Deal. By 2030 we must end air travel; end the use of fossil fuels; mandate that every new job be unionized; decommission every nuclear plant; rebuild every building in America for state-of-the-art energy efficiency and government funding everyone including deadbeats who refuse to work.

O’Rourke continued his trademark deception tactic. He said we should ensure immigrants “lawful paths to work”. Wait a minute, dude. You and your fellow Democrats say screw our immigration laws, let’s roll out the red carpet for illegals. Democrats say because we have pillaged the world’s resources and because we are racist, sexist and homophobic, we do not have the moral authority to keep anyone out of our country. Not only is O’Rourke fighting to stop Trump from building a border wall to keep Americans safe, but he also wants to tear down the existing border wall in El Paso, Texas. https://fxn.ws/2UzwOAR

O’Rouke said we should “listen to and lift up rural America.” The truth is, O’Rourke and his fellow Democrats despise rural America. Rural America voted for Trump, desire to keep their guns, attend Christian churches on Sundays, believe marriage is between one man and one woman and they believe abortion and infanticide are evil. Pandering to rural America is simply more of O’Rourke’s campaign of deception.

As a black American, I was stunned when O’Rourke said we should “confront the hard truths of slavery, and segregation, and suppression in these United States of America.” What the heck is he talking about? Ratification of the Thirteenth Amendment in 1865 ended slavery in America. The only segregation I am aware of is black students segregating themselves on college campuses; demanding black student unions and race-based housing facilities. https://bit.ly/2Y1B6mL Who are the masses of Americans O’Rourke claims we are suppressing? Do you see O’Rourke using Democrats’ disgusting tactic of dividing Americans into bogus victimized voting blocs?

After spewing gloom-and-doom, America sucks and everyone is a victim lies, O’Rourke had the audacity to say, “This is going to be a positive campaign.” I laughed out loud.

O’Rouke is anti-law enforcement, voting against ICE. He calls our nation’s police “the new Jim Crow” which cruelly paints targets on the backs of our brave men and women in blue to be assassinated by Black Lives Matter.

Kate Steinle was shot and killed by an illegal alien who was deported several times and kept coming back to his sanctuary city, San Francisco. Kate’s Law would give mandatory jail time to illegals who repeatedly break our immigration laws. O’Rourke voted against Kate’s Law. Supposed man of the people O’Rourke voted against Trump’s tax cuts. O’Rourke wants single-payer health-care which leads to rationed health-care, in which government makes funding decisions determining who lives or dies.

While in Texas campaigning for Ted Cruz, I got to witness O’Rourke’s deceptive tactics up close when he ran for US Senate in Texas. My brother and sister fellow Americans, our country deserves much better than sociopath conman Beto O’Rouke. https://bit.ly/2FeZMB0