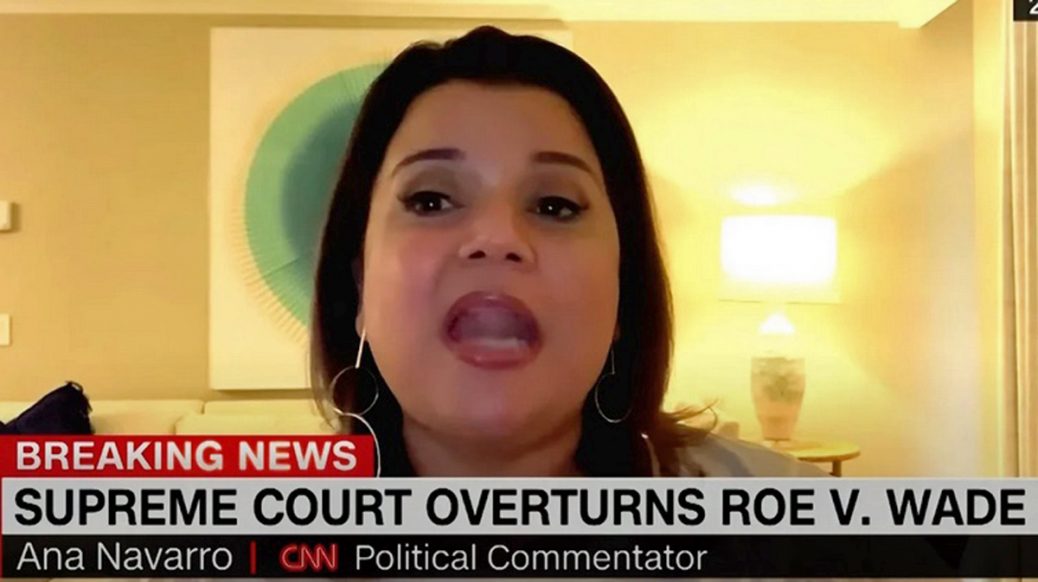 Leftist Ana Navarro, who sometimes poses as a “GOP strategist” on ABC’s The View, shocked CNN audiences on Friday when she hinted that she supports abortion to kill off autistic and mentally challenged people like those in her own family.

The morally challenged, hardcore leftist Navarro — who also claims to be Catholic (LOL) — was invited as a guest onto CNN Newsroom and was asked about her position on Friday’s overturning of Roe v. Wade

She began with the idiotic left-wing talking point du jour saying that she is “struck by the contrast” that the SCOTUS passed down a ruling saying that our Second Amendment rights are a federal issue and shall not be infringed, but out “abortion rights” is now been sent back and is a state’s rights issue.

This is an ill-informed, and frankly stupid, talking point.

The right to bear arms is listed BY NAME in the Constitution. There is no “right to abortion” anywhere in the document.

But that is the least of her stupidity in this CNN interview. She next went on to say that abortion is good and she wished her own relatives had been aborted… or she may as well said it that way because she insisted that abortion is useful to kill off babies with mental development issues and other handicaps.

Well, what a wonderful little Eugenics queen, you are, Ana.

If you don’t want to watch this disgusting creep, here is what she said:

“And I am not anybody to tell you what you need to do with your life or your uterus!” Navarro snapped.

“And because I have a family with a lot of special needs kids. I have a brother who’s 57, and has the mental and the motor skills of a one-year-old. And I know what that means financially, emotionally, physically, for a family, and I know not all families can do it,” she added.

“And I have a step-granddaughter who was born with Downs syndrome, and you know what? It is very difficult in Florida to get services. It is not as easy as it sounds on paper and I’ve got another, another step-grandson who is very autistic, who has autism,” she continued.

Navarro went on to claim that she could compartmentalize her Catholic beliefs away from her political support for abortion.

“And you have no damn right to tell them what they should do with their bodies!” she concluded. “Nobody does!”

This scumbag should be ostracized from civil society.

Lastly, a quibble. This nitwit has spent years doing TV interviews. Hasn’t she learned not to have a bright light in the room BEHIND her while on camera as she is doing a remote interview? Is she really that inept at this? STILL? After all these years?