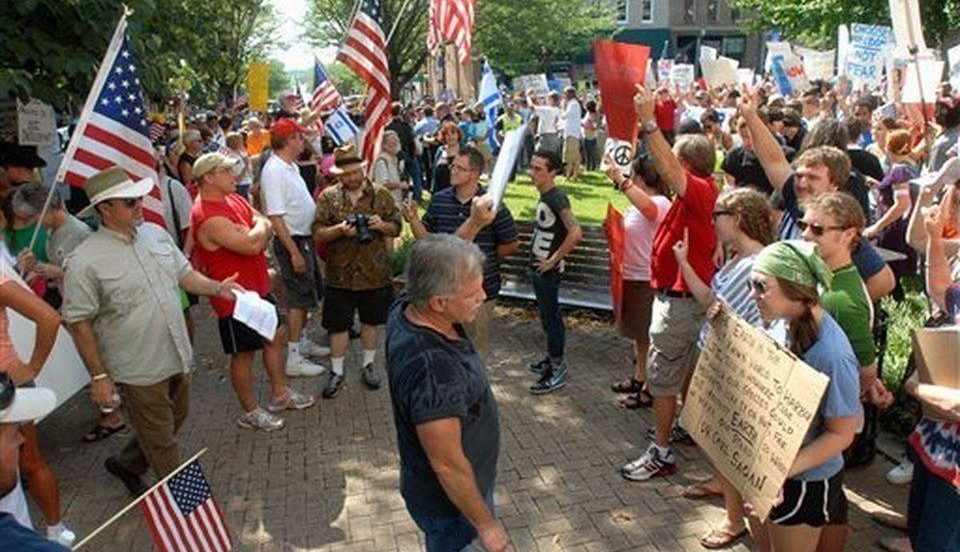 In short, the American people are currently on a trajectory towards complete subjugation under an authoritarian tyrannical government or a Full Blown All Out Hot Civil War, simply because the current agenda of the Democratic Party and its hardcore socialist components leave zero room for compromise; conservatives cannot, and most will not compromise with evil.

When we see two standards of law and “elites” being allowed to avoid prosecution, while others are targeted for criminal prosecutions by institutions that have been weaponized by the Left and Obama, we know the “rule of law” and the republic are dying, if not dead, and it will take years to repair the damage, even should Barr successfully find and prosecute all involved in the soft coup against President Trump, through the abuse of their power and the FISA Court as well as spy operations and other illegal means.

When we see riots in the streets over manufactured “wrongs” and the murders of policemen by Black Lives Matter, riots on campuses and the squashing of conservative speech, online censorship by Leftist Big Tech and the advocacy of violence against whites and “white privilege” by the likes of Malik Shabazz of the New Black Panthers, calls for the Reconquest of the Southwest by LaRaza, conservatives and Christians physically attacked for carrying the American Flag i.e. Portland, Oregon ANTIFA — all communist inspired and backed by USACommunist Party and George Soros’ “Open Society”, we few or however many conservatives full well know and understand that a concerted effort is underway, aligned with their Muslim allies of CAIR and the Muslim Brotherhood, to undermine and fundamentally transform America into an authoritarian socialist state __ in their own words __ “By Any Means Necessary”.

Yes, ___ We can still try to effect change from within the system so much as it still exists, but like many of You, I wonder what exactly is holding American’s in their seats before their TVs, when their very freedom and the entire Bill of Rights are at stake this very minute, despite all efforts by President Trump, and in some instances because of President Trump i.e. HR 76, FISA Reauthorization and the ban on bumpstocks. And like You, I know it will take more than simply talking to our so-called leaders.

Gathering in one massive rally — protest — in the center of the nation is a start and it must be accompanied by messages formed with the strongest of meaning and intent, to properly convey just how serious We the People are viewing the erosion of the republic, the Constitution and the continued assaults against every good and decent thing our nation was founded upon.

I see a period over the next seven years of intense civil strife, and I believe that the Left will riot if Trump is reelected in 2020 just as they did in the years leading up to the election and afterward in all the liberal bastions. I also believe that if the Democrats somehow win in 2020, the Left will still riot and attack conservatives, because they will feel much more emboldened this time around than they did under Obama — and it was pretty bad under Obama.

And, with our divides currently so wide and deep, since there really isn’t any good way for true American Patriots and conservatives and Christians to compromise with the socialists and communists of America, and America’s Millennials — the majority of whom embrace ideas antithetical to our Founding Principles and the Constitution — I see the level of violence increasing over the next seven years to the point of civil war, possibly with civil war breaking out within this time frame.

While I see this as something we should avoid, if at all possible, I do not run from the idea, since before I see my children and grandchildren and their children’s children serving as serfs and chained at the altar of a Socialist Super State with asinine policies under “hate speech” laws and sovereignty killing legislation that also destroys individual liberty, I would prefer fighting ’til my last dying gasp to save freedom and liberty in Our Beloved America, even if it means stacking the dead carcasses of the Red, Radical, Democratic Party Commie Rat Bastards ten feet high and ten feet deep all about me in all directions for as far as the eye can see.

God Bless You for Fighting the Good Fight. God Bless Your Family Too. And God Bless Our Beloved America. May He Keep Her Free For All Eternity and Damn Her Enemies Both Foreign and Domestic to the Hell They Have Earned and So Richly Deserve.

[Illegal aliens protesting and waving the Mexican flag in America]

Muslims protest in support of Gaza and Hamas in 2009 in Murfreesboro, TN